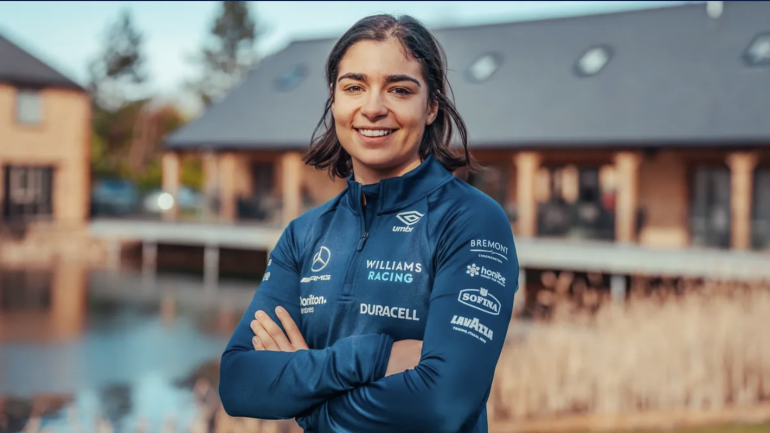 Chadwick To Continue With Williams

Jamie Chadwick is not only returning to W Series for 2022, but also the Williams Driver Academy.

Chadwick is a British racing driver, who joined the academy back in 2019. That same year she won the W Series championship in its inaugural season.

She announced earlier this month that she would be returning to W Series for 2022 with Jenner Racing – Caitlin Jenner’s new team. But it was confirmed today that Chadwick would continue to join forces with the Williams F1 team as part of their driver academy.

Chadwick said she is “delighted to continue working with the Williams team”. This will be her fourth year with them as part of their developmental programme.

She commented on the “support from everyone” at Williams throughout her time there the past three years. Chadwick’s aim is to one day compete in Formula One. The simulator work that she has done whilst being part of Williams’ Driver Academy “has been hugely valuable” to her.

Since joining the Williams Academy, Chadwick has won the W Series twice. Last year she defended her title as champion. She beat title rival Alice Powell by 27 points.

During the 2022 season of W Series, she achieved four race wins and seven podiums. The championship saw her gain 15 super licence points.

As well as W Series, Chadwick competed in Extreme E last season for Veloce Racing. All her work as part of the William’s Driver Academy has helped her expand her racing skillset.

When speaking of the 2022 season, Chadwick said she is “looking forward to continuing” her work. She knows that Williams “will be cheering [her] on during [her] 2022 W Series campaign”.

“I’m really proud to continue representing the Williams name on the grid”.

By Catherine Micallef17 hours ago

Williams Racing Sporting Director, Sven Smeets also shared the team’s happiness at Chadwick staying at the Academy. The team are “incredibly pleased” to continue working with Chadwick. Her “immensely impressive performance” last season in W Series “only reinforced [their] appreciation for her talent and skill”.

He continued to say that the Williams’ Driver Academy is “delighted to play a part in her commendable success”. Chadwick is an inspiration in the industry as she promotes “female inclusion”, which is both “important and admirable”.

Smeets said the team are “looking forward to working with her throughout the 2022 season”.

Jack Aitken also announced today that he will be staying on as a Reserve Driver for Williams F1. He said he is “happy to report” the news and is “looking forward to pushing on with the team this year”.