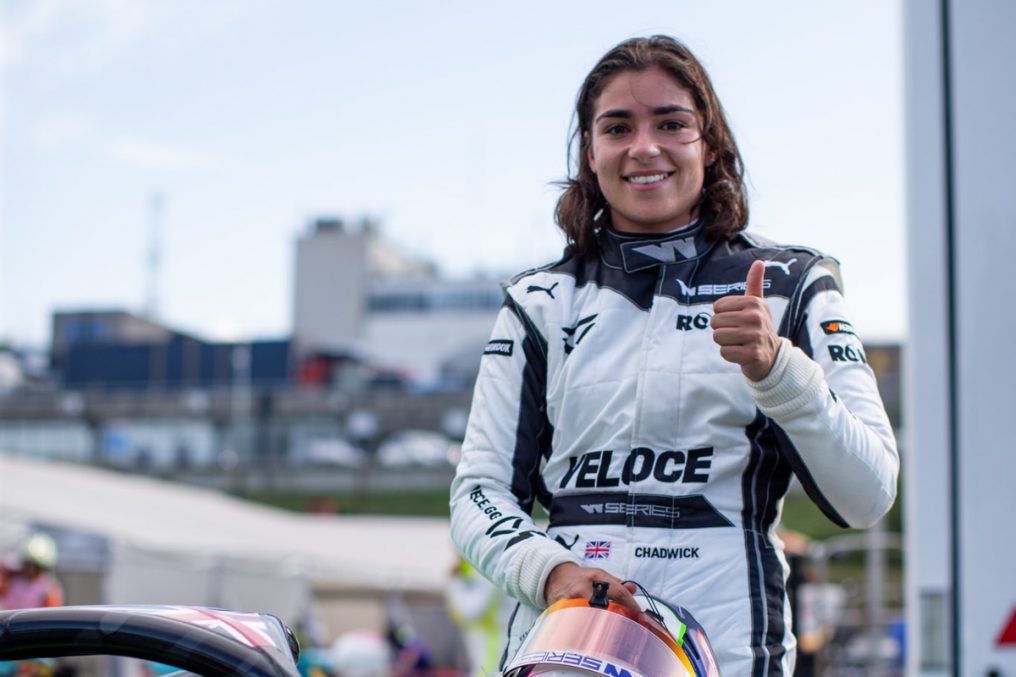 In Round 4 of W Series, Jamie Chadwick dominated and took her second victory this season at the Hungaroring in Budapest, Hungary. After dominating the track this weekend with pole position, the win and the fastest lap, she is now at the top of the championship standings.

I had the opportunity to speak with the Top 3 after the race in the W Series Press Conference.

Alice Powell finished in second followed by Nerea Marti in third, who stood on the podium for the first time in her W Series Career.

The previous World Champion, Chadwick continued to stretch her lead, showing incredible pace around the track with a comfortable margin to Powell in second.

The opening lap saw Fabianne Wohlwend lose her front wing in a collision, and had to retire with 12 minutes of the race remaining.

Ira Sidokova was able to jump ahead of Beitske Visser on the opening lap into fourth and held her off until the chequered flag.

With less than 5 minutes to go, Koyama and Abbie Eaton touched when trying to make the move for 12th place. After some wheel-to-wheel racing, it was Miki Koyama to advance from the British driver.

After today’s race, I was able to speak with the Top 3 and get their thoughts on today’s race and looking ahead to Spa and the future.

Speaking with FormulaNerds, Chadwick was very pleased with today’s masterclass performance: “I think after practice and qualifying we knew we had quite a nice pace advantage this weekend,” she said. “So I knew I would be quite comfortable if I was in the lead after the first lap, which fortunately I was able to be, I wasn’t challenged at all into Turn 1 which was nice.

“So yeah I think it was head down, put the laps in and fortunately I had a really good car underneath me this weekend to be able to do that.

“Summer break I’m going to enjoy a bit of downtime for sure, but of course work hard and just as strong in Spa.”

After today’s dominance and the rumours that Chadwick could be the first female driver in Formula 1, I asked if the opportunity would come along, would she take it.

“Yeah of course I would take it,” she said humbly. “I would still say I am a long way off getting that opportunity yet. I’m doing everything I can at the moment, but there is a lot more to achieve in this sport before I can justify a spot on the Formula 1 grid.

“So yeah from my perspective just going to keep working hard, focussing on what I can focus on and hopefully the opportunity will come.

“But for sure W Series has been the biggest stepping stone and the biggest platform to have even given me the chance to even have my name spoken about in that light, so I think to be having this chance and this platform is fantastic for us all.

Winner winner 🏆 What a weekend 🙌🏻 pic.twitter.com/JaALN6VOUf

Powell obviously would have wanted more today, but the second step on the podium still saw her gain some good points today.

“We got a fairly good launch off the line and I think we kept Jamie [Chadwick] fairly honest in the first couple of laps, but she’s done a great job this weekend, she just really had the pace on us this weekend and We struggled a bit.

“With the car in the race, that was just obviously progressively getting worse. We tried something on set up we thought would work but unfortunately didn’t, but still happy with second place. Obviously, all of us on the grid want to be winning, but it’s still a long way to go with four races left, and it’s important to be consistent and keep wrapping up those points.

When asked, Powell reflected on her 2021 season thus far and is now looking ahead to Spa: “Certainly a lot better than my 2019 season, that’s for sure. Obviously we had less races, but at this sort of point at the four-race marker I had two DNF’s, so it is going a lot better at the moment.

“It is quite close in the Championship so just need to try and keep that momentum going, and Spa is one of my favourite tracks and I’ve loved racing there in the past, so looking forward to be going back there.

“But I’m happy overall with the season. If you had told me at the start of the season I’d be in this position, I definitely would have taken it.

Now at the halfway mark and Chadwick only one point ahead of Powell, it is anyone’s game to play for.

Non-stop action from start to finish. 👊