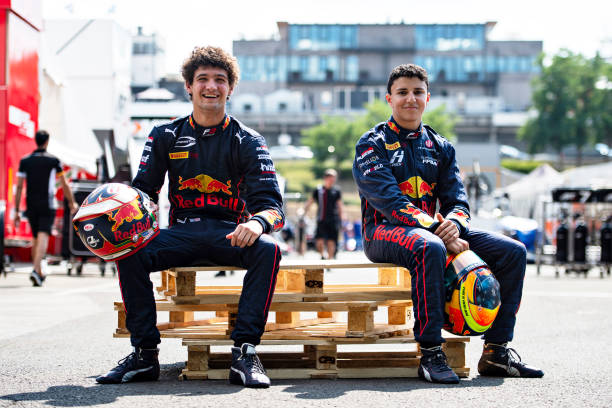 Both teams are filled with Red Bull junior drivers, and have been confirmed for the 2023 season

Five Red Bull junior drivers have been announced in Formula 2 and Formula 3 between Carlin and Hitech.

Enzo Fittipaldi and Zane Maloney, brand-new Red Bull juniors, will be joining Carlin in Formula 2 after completing post-season testing with the team in Abu Dhabi.

Fittipaldi joins the team after completing his rookie season in Formula 2 with Charouz Racing System. He finished eighth overall, an impressive result for him and the team. He accrued a total of six podiums throughout the year, his best weekend coming in Hungary when he finished third in the Sprint Race and second in the Feature Race.

“I’m extremely excited to be joining Carlin and as well to be a part of the Red Bull family for the 2023 season,” the Brazilian driver announced. “It’s an amazing opportunity and I can’t wait for the first weekend in Bahrain.”

Fittipaldi will be teammates with a rookie in 2023, partnered with Zane Maloney. In his first season of Formula 3, Maloney finished second overall with the Trident team. He won the final three Feature Races of the season, one of them from pole position. Now, he’s making the step up to Formula 2 with Carlin and Red Bull backing.

Maloney commented: “Joining Carlin in F2 and to do so as part of the Red Bull Junior Team is a fantastic opportunity after my first year of F3 last season. I’m re-joining a team I know extremely well and have won a championship with before in F4.

“I’ve seen firsthand how strong the team are in F2 and we had a great test together last year in Abu Dhabi. To embark on this journey in Red Bull colours is a dream come true and I’m incredibly excited to get the season underway in Bahrain next month.”

Hitech has confirmed three of their drivers for 2023, including their full Formula 2 lineup and one Formula 3 driver.

In Formula 2, Isack Hadjar and Jak Crawford will both graduate from Formula 3 to join the team. Hadjar joined the team in 2022 for his rookie Formula 3 season, where he finished fourth overall with three wins to his name.

“I’m really excited to be a part of the Red Bull Junior Team and continue this journey with Hitech for another year,” said Hadjar. “Hopefully we can win some more races and have a strong season together.”

Crawford also completed his rookie Formula 3 season with Hitech, but did so the year prior, in 2021. In 2022 he stayed in Formula 3 but moved to PREMA Racing. He went from finishing 13th overall to seventh that year, and now moves back to Hitech for 2023.

Crawford commented: “I am delighted to be back with Hitech for my first season of Formula 2. It will be a tough season with a strong grid but I am looking forward to what lies ahead.”

The third driver that Hitech confirmed today is Sebastian Montoya, another new addition to the Red Bull Junior Team. Montoya joins Hitech for his rookie season of Formula 3. He completed one round of the category last season with Campos Racing, finishing eighth in both the Sprint and Feature races in Zandvoort.

Montoya is looking forward to a title battle already, saying “We will all work together to have a great year and fight at the front consistently. I just want to say thank you to my family and everyone else involved. Let’s bring on the season and give it everything.”