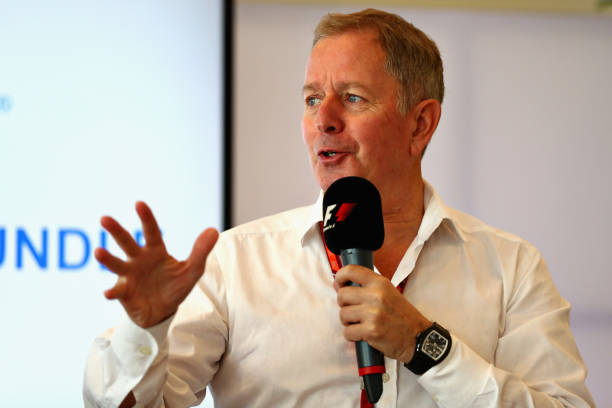 Sky Sports Formula 1 pundit Martin Brundle believes that the split between Mattia Binotto and Ferrari is “strange”. The 63-year-old backed his point, saying there is currently no direct replacement for the Italian engineer.

The Italian outfit announced earlier in the week the acceptance in Binotto’s resignation. The Italian engineer spent four seasons as the Scuderia’s team principal, starting from the 2019 season.

The decision was made by Binotto after an up and down 2022 season with the Maranello team. Ferrari started with early highs with a one-two in Bahrain and were extending their lead due to Red Bull’s reliability woes early on. However, later on in the season would see frustration with the mixture of reliability, strategy errors, and driver mistakes.

Binotto made the conclusion to resign as team principal. The 53-year-old felt that he did not have the total backing of Ferrari chairman John Elkann and CEO Benedetto Vigna.

The Italian engineer will still be with the Scuderia until the end of 2022. Ferrari in their announcement revealed that they hope to hire a new team boss at the start of 2023. There is a lot of belief that Ferrari have made a mistake in letting Binotto leave entirely as the Italian has a lot of talent and experience in the technical side of things.

Martin Brundle was in London for the Guild of Motoring Writers’ Annual Awards dinner. The former Formula 1 driver acknowledges the pressure that comes with leading Ferrari. He also believed that not having a direct replacement seems “strange”:

“You’re working for a country there at Ferrari, not just a team, of course. They’ve lost their chief technical officer and their team principal, so unless they have got somebody very, very good to replace him straightaway, it all looks a little bit strange. But that’s the nature of it.”

The 63-year-old, therefore, suggested that Ferrari should appoint a team principal that would not be under the spotlight as much by the Italian media as Binotto was.

“You’ve got to speak Italian,” he said. “And I think the problem is, if you look back at when they were last successful, they had a Frenchman in Jean Todt, a Brit in Ross Brawn, a South African with Rory Byrne and so on.

“Maybe that’s what they need again, something like that: people who are not completely exposed to the daily Italian media.”

The strongest links, so far, are towards current Alfa Romeo boss Fred Vasseur. Vasseur is a French engineer that had previously worked with Ferrari driver Charles Leclerc, during the Monegasque’s junior categories.

Stefano Domenicali wishes Binotto the best for the future

Formula 1 CEO Stefano Domenicali was also at the event. The Italian spent seven years as Ferrari’s team principal, during the years of 2008-2014 – he was involved in Ferrari’s 2008 constructors’ championship title.

The 57-year-old didn’t want to comment on the “dynamic of the team”. The Italian also said: “When you are second in Ferrari, it is something that is not enough.”

However, the former Ferrari boss said he “was in the same position many years ago” and wished Binotto the best for the future. Domenicali acknowledged and praised the recovery that had been made during Binotto’s time as team leader. The Scuderia finished sixth in the constructors’ championship during the 2020 season.

Do you think Ferrari have made the right decision in waiting for the start of 2023 to get their new team principal in?