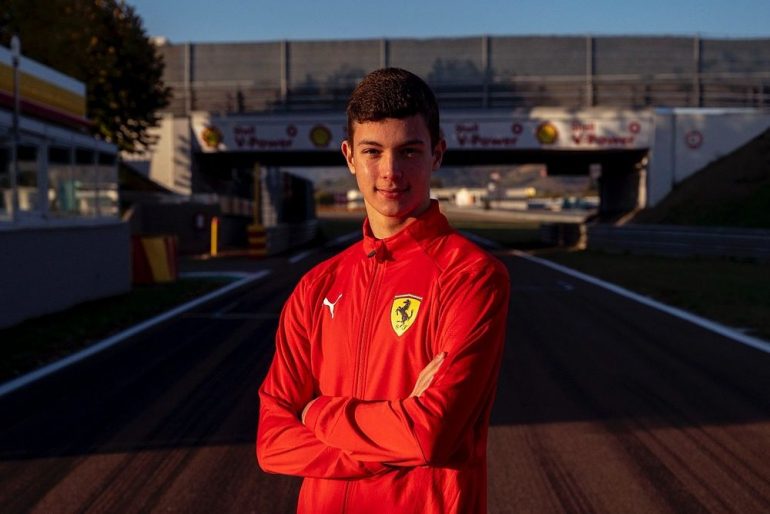 Oliver Bearman has joined the Ferrari Driver Academy following his double title success in the Italian and German Formula 4 this season.

The 16-year-old from Chelmsford joins the prestigious Italian F1 team following in the footsteps of Charles Leclerc, Jules Bianchi, Lance Stroll and Mick Schumacher over the past decade.

Bearman impressed the Scuderia at the FDA Scouting World Finals in Maranello last month. He is also a finalist for the Aston Martin Autosport BRDC Young Driver of the Year Award, along with Jonny Edgar, Louis Foster and Zak O’Sullivan.

“I am really happy to have been selected to join the Ferrari Driver Academy,” Bearman said. “It is a great way to end what has been a really good racing season for me. Just spending a week in Maranello was in itself an amazing experience, especially getting to drive at the Fiorano track.

“Now I can’t wait to start working at the Academy and to be part of the Ferrari family and to see what the future holds for me.”

Bearman took the ADAC Formula 4 title in Germany last weekend, where he claimed his sixth win of the season to finifinish 26 points clear of second place. He had earlier sealed the Italian F4 title with 11 wins including a seven-in-a-row sequence across Misano, Vallelunga and Imola.

It capped off a successful year in the category with Van Amersfoort Racing after Bearman also dominated proceedings in Italian F4, scoring 11 wins including a seven-in-a-row sequence across Misano, Vallelunga and Imola.

By Morgan Holiday22 hours ago

“During the days spent at Maranello and Fiorano, Bearman showed all the aptitude he so clearly demonstrated during his Formula 4 season,” said FDA chief Marco Matassa. “Apart from his basic speed, he has other important qualities, such as the ability to give good feedback to the engineers, as well as understanding in which areas he can improve, while putting into practice what he was told to do before going out on track for the first time.”

Ferrari has also signed 16-year-old karter Rafael Chaves Camara to the FDA following his outing at the Scouting World Finals.

I am very happy to have been chosen by the Ferrari Driver Academy.”, Camara said.  “It is a unique opportunity for me and I will do my best to repay the faith shown in me. It is a dream to be part of this big Ferrari family and I just have to thank everyone who has always supported me, especially my parents who are always by my side.”