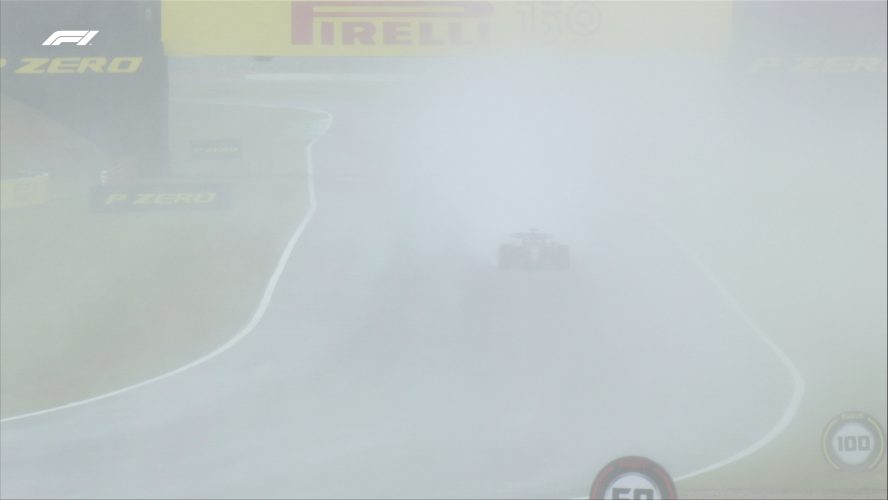 The Spaniard was surprised to claim his first ever pole in a hectic end to Q3, pipping Verstappen on a day that the Red Bull driver had mostly dominated, despite numerous spins and trips onto the grass.

Leclerc, who made a mistake on his final lap, is joined on the second row by Sergio Pérez, with Mercedes perhaps a little disappointed to finish fifth and eighth.

The session got underway in soaking wet conditions, with times tumbling through Q1 as the water cleared from the track and the rain stopped.

Verstappen and Leclerc exchanged times at the top, with the Mercedes pair of George Russell and Lewis Hamilton not far behind.

To use a Brundle-ism, the leaderboard looked like a fruit machine in the closing minutes as a dry line emerged, but as the chequered flag fell it was a familiar group of five in the knockout zone.

Both Haases and Aston Martins fell at the first hurdle, along with Alexander Albon, meaning his Williams teammate Nicholas Latifi scraped through in perhaps the surprise of the session.

The rain began to fall again between Q1 and Q2 and as the latter got underway the aforementioned dry line had all but disappeared.

The intensity of the rain increased, putting the pressure on Sainz down in 14th, but the Spaniard got himself out of trouble with a lap good enough for fourth.

Verstappen was once again at the top of the times for much of the session, with Hamilton and Leclerc completing the top three.

It became apparent in the final five minutes that nobody was going to improve – Lando Norris even reporting some aquaplaning – meaning a bottom five of Pierre Gasly, Valtteri Bottas, Yuki Tsunoda, Daniel Ricciardo and Esteban Ocon was clear long before the session timed out.

And that’s right, Latifi’s name is missing from that group again, the Canadian scraping into the final part of qualifying for the first time in his career, despite being in the Williams not featuring their new upgrades.

So, into Q3 and the decisive moments for the sharp end of the grid.

To mix things up again, the rain stopped just before the light went green, meaning the track would be gradually clearing again as the session went.

That was, unless the rain came late on, with engineers reporting to their drivers there was a chance of a final twist in the dying minutes…

The drivers tip-toed round on the intermediates, nobody wanting to make a mistake and ruin their chances.

Verstappen looked to be on for a stellar lap on his first run, only to spin with a couple of corners remaining. Zhou Guanyu temporarily went to the top of the leaderboard, before Fernando Alonso showed his prowess in tricky conditions again with a time more than three seconds faster than anyone else.

It didn’t last for long, though, with the usual candidates of Leclerc and Verstappen grabbing the top two spots, even with the Dutchman having again gone off near the end of the lap.

He did finally keep it on the road and went clear at the top, however, with Hamilton moving up to second, just two hundredths of a second back.

But as the drivers made one final attempt, it was Sainz who kept it neat and tidy to produce the pole time with a 1:40.983, just under a tenth ahead of Verstappen.

Leclerc cost himself a chance at pole with a late spin but will start from the top three nonetheless.

Mercedes may have been hoping for more, having been there or thereabouts for much of the session, but Hamilton’s final time was only good enough for fifth, with Norris and Alonso creeping in between the two Silver Arrows.