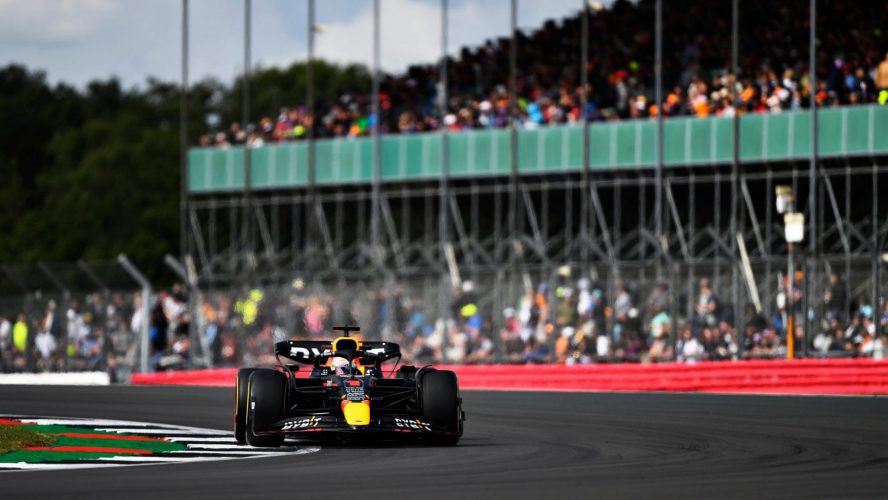 After an eventful Friday, FP3 was an important session. Due to the lack of running yesterday, today was important.

Start of the session

The FP1 session, which saw only 10 drivers set proper times, was hindered by the classic British weather. FP2 was more successful in terms of running the cars as they all finally got out.

Now, onto FP3. As the session started there were high winds being reported from the Aston Martin camp as Lance Stroll did his warm-up lap.

In the early stages of the practice session, the McLarens looked extremely quick on the medium tyres. Whilst other teams did overtake the papaya team, they were all on the quicker, soft compound.

As it was just the early stages of the session, all laps can be taken with a pinch of salt, however, the two Alfa Romeo’s looked quick.

As all the other cars started to prepare and head out, Haas looked like they were in trouble. Kevin Magnussen’s car seemed to be having work done to it at the start of the session. Despite completing some laps, his car looked like it was having issues.

Rain or No Rain?

After yesterday’s weather havoc, all teams were tracking the weather radar heavily. Some teams were saying rain was coming in 15 minutes whereas Aston Martin predicted that there would be no rain until the last 5 minutes of the session.

All eyes on the weather radars. 👀 #BritishGP 🇬🇧

Hamilton’s first flying lap took him to P3 on the leaderboard. It was shortly beaten by teammate Russell. This is quite a turn of fortune for Mercedes who have been struggling this season. Mercedes are looking very quick around Silverstone, however, the porpoising is still evident. Despite the extreme porpoising, Russell said there was “no bouncing” on the radio.

After 15 minutes of the session, the top 3 teams occupied the top 5 spots. The one person missing was Max Verstappen who, after a complicated FP2, didn’t run his car in the early stages of FP3. Verstappen was complaining about a “noise” in FP2. After 20 minutes, however, Max came out for one flying lap and went straight to the top with a gap of around four tenths.

Hamilton vs Verstappen at Silverstone… again

Verstappen looked incredibly comfortable and his gap didn’t seem to close, despite other cars running lots of laps. Around halfway through the session, Hamilton set a stellar time which got the closest to Verstappen. Hamilton went into P2, just under two tenths away from Verstappen.

About 5 minutes later, Verstappen went a tenth quicker. Obviously, this was followed by Hamilt0n setting a time just a tenth slower than Verstappen. Verstappen looked comfortable at the front but Hamilton was getting close to his times.

Despite Leclerc and Russell beating Hamilton’s times moments later, it was nostalgic to see Verstappen and Hamilton vying for the top spot.

In the last part of the session, the top teams were giving it their all. Charles Leclerc got within two-hundredths of Verstappen’s lap. That didn’t stay like that for long as Verstappen put in a lap of 1.27.901. This put him nearly half a second ahead of the rest.

With less than 15 minutes to go, the top 3 teams held the top 6 positions with Lando Norris being “best of the rest” in P7.

Perez, who seemed way off Verstappen all session, put his Red Bull into P2. He set an incredible lap. Yet, it was still four-tenths slower than Verstappen.

British Grand Prix- FP3: What does it tell us?

The main takeaways from this session are:

Red Bull looks incredibly strong, especially as the circuit grips up. Despite saying that they were struggling, the Red Bulls looked nearly untouchable.

Daniel Ricciardo, again, is off the pace. Norris was the best of the rest throughout the whole practice whereas Ricciardo was very low in the timings. The McLarens looked very quick at the start.

Ferrari and Mercedes still look strong, but, there is a big gap between the Red Bulls.