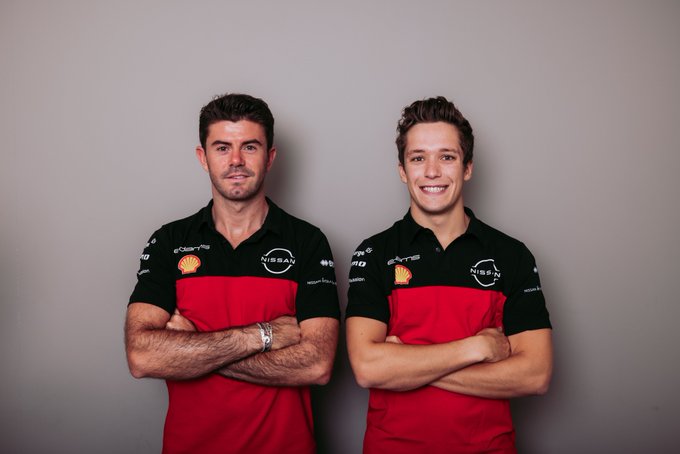 How will the pair deal with Gen3?

Norman Nato and Sacha Fenestraz join Nissan for Season Nine and the start of Gen3.

After acquiring e.dams earlier in the year season nine marks the first season Nissan will compete as a single team. It also marks the start of their partnership with McLaren to who they will provide powertrains. This will also be paired with a multiyear technical collaboration.

Speaking on the move Tommaso Volpe the Managing Director of Nissan commented, “This is a significant moment for the team as we commence the Gen3 era, and we are very happy to welcome both Norman and Sacha on board.”

Going on to say:

“This marks a new era for the Nissan Formula E Team, and we believe that a combination of experience and the opportunity to nurture new talent is the right balance for us right now. In Norman and Sacha, we have found two strong drivers to fulfil our vision.”

He concluded by saying “Norman has proven to be a very talented driver in Formula E and in other series, and he brings a wealth of experience and skills to the team. As for Sacha, we have monitored his progress and performance over the past few years and have been very impressed. We believe he has great potential and that this is the right time to bring him into to the team.” Adding ” I am convinced that they will complement each other and the team very well. I can’t wait to see them both in action on track in our new Nissan Gen3 car.”

I’m extremely happy to announce that I will be joining @NISMO @Nissan to race in @FIAFormulaE world championship from next season.
It’s a dream come true, and my first world championship!
I can’t wait to get started with the new car in the Gen3 era. #NissanFormulaE #FeelElectric pic.twitter.com/KuLXQxidf3

The 23 year currently leads the Super GT500 while also sitting second in the Super Formula standings. The move will mark his first full season in Formula E.

The French driver, however, is no stranger to Formula E, testing with Jaguar during the 2020 rookie test in Marakesh. Following this, Fenestraz was announced as the team’s test and reserve driver for season seven. This partnership then continued through to season eight.

During the final race in Seoul, Fenestraz stepped into the Dragon Penske after Antonio Giovinazzi was unable to compete after sustaining a hand injury.

Fenestraz commented on the move saying:

“It’s a dream come true. It will be a big step forward in my career, to move up into a World Championship for the first time and to be competing at such a high level against some of the best drivers in the world, It’s going to be a different challenge for me as it will be my first season in an all-electric car.”

He went on to add, “I’m excited to compete in this championship as street circuits are my favourite, with high risks and no room for errors.”

He concluded by saying “As a rookie in a new format, there is a lot of preparation to do and plenty to learn! I’ve been dreaming of this moment for a very long time, and I am very grateful to Nissan for this opportunity. I can’t wait to get started and I’ll do everything to perform as best as I can.”

The move to Nissan marks Nato’s return to Formula E.

Nato has a strong history in Formula E. After being named as the reserve driver for Venturi during the 2018 and 2019/20 seasons, Nato took on a full-time driver for the 2020/21 season.

Here he won the Berlin E-Prix after previously narrowly missing out on the podium positions. Over the season he accumulated 54 points and finished 18th in the standings. He was however replaced by Lucas Di Grassi leaving him without a seat for season eight.

Due to his lack of seat Nato moved to compete in the World Endurance Championship. He also took up a reserve role with Jaguar TCS Racing.

He was finally called upon during the final two rounds in Seoul after Sam Bird was unable to compete after sustaining a fractured hand during the London E-Prix.

Nato commented on his return saying, “I’m very happy to be making my comeback as a full-time driver in Formula E with Nissan,”

“The Gen3 era will be a new chapter for the championship, and I’m excited to prepare for testing and drive the car.”

He concluded by saying, “The hard work starts now – I have a lot to learn and areas to develop in with the team to be at my best for the first round of Season 9 in Mexico City.”

How will the duo fare in Gen3?