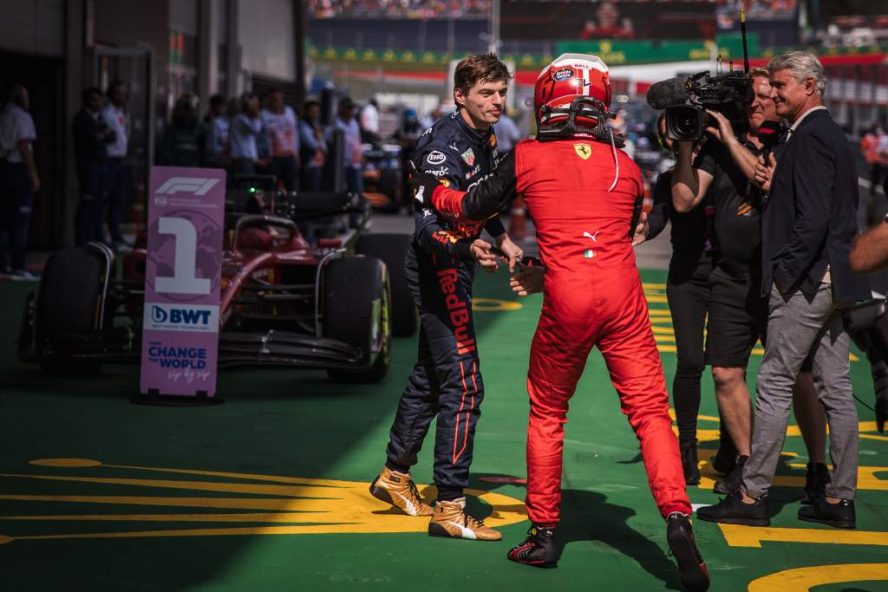 Austrian GP winner Charles Leclerc, second-placed Max Verstappen and third-placed Lewis Hamilton were all summoned to the Stewards post-race.  This was in relation to an alleged breach of Parc Ferme regulations.

All three drivers parked their cars after the race as normal in Parc Ferme. Charles Leclerc celebrated with his team after a much-needed win. It was the Ferrari’s first visit to the winner’s step since Australia.

Second-placed Max Verstappen was pragmatic in the face of his defeat to Ferrari.  Second place was still a strong result for the Dutchman in front of his legions of travelling fans.

Lewis Hamilton’s third place was the Briton’s second podium in as many races and a welcome boost for the team. Teammate George Russell recovered well after a first-lap crash with Perez to P4.  This ensured the Mercedes team were in good spirits post-race.

However, the FIA stated that despite the celebrations, a protocol breach had taken place. The FIA state that the physios for the podium trio entered Parc Ferme “without permission”.

Once in Parc Ferme, the physios have been recorded speaking to their drivers after the top three had barely got out of their cars. By doing this, the physios violated a regulation aimed at preventing incorrect driver weights. This is because items can be handed to the physios, reducing the final recorded weight of the driver.

All three drivers have been handed a suspended €10,000 fine for the breach by the stewards.  A reminder of the etiquette and procedure has also been included.  Ominously, the FIA has threatened drastic action if this continues.

FIA clamping down on regulation enforcement

Stating the consequences of further breaches, the FIA said:  “The competitors are warned the passes of the individuals concerned may be revoked in case of systemic violation”.

According to Chris Medland on Twitter, the FIA has been clamping down on this practice in recent races. The suspended fines are likely to act as a deterrent to the rest of the paddock.

The Stewards were very busy during the Austrian GP weekend, with track limit penalties aplenty across F1, F2 and F3. The FIA warned that track limits were to be heavily enforced in Austria. The white line was to be the edge of the circuit, with drivers receiving three warnings. Following this, a black and white flag would be waved. If further transgressions occurred, a five-second time penalty was to be awarded.