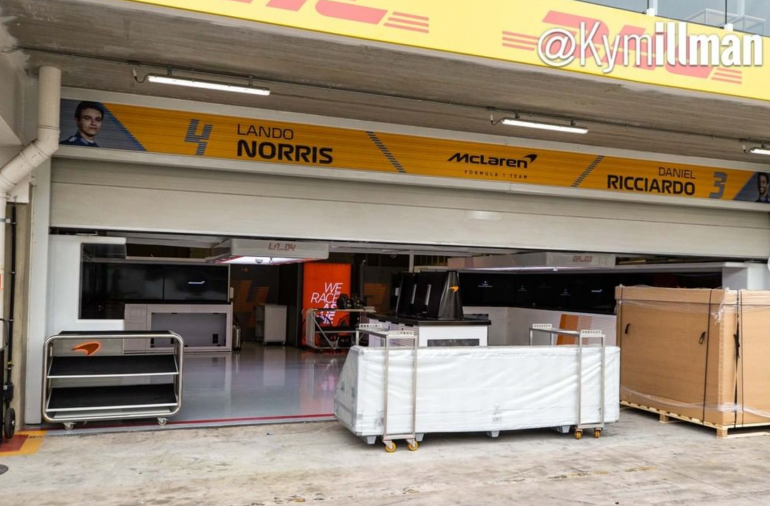 Many Formula 1 teams are still awaiting the arrival of various parts – and, for some, entire cars – at the Brazilian Grand Prix.

A paddock source for the Formula Nerds revealed yesterday that some air freight had been delayed from Mexico to Brazil, which will have an impact upon crews up and down the pit lane.

Photos have emerged of an entirely empty McLaren garage as a bizarre situation unfolds, with Formula 1 bosses having waived the usual curfew to allow engineers to remain at the Interlagos circuit overnight in an attempt to make up for lost time.

The curfew would usually kick in 12 hours prior to the start of Free Practice 1 and prevent operational personnel being within the confines of the circuit for a period of nine hours – at this weekend’s grand prix, that would have meant leaving the track between the hours of 00:30 and 09:30 local time under normal circumstances.

Haas are another team affected, Team Principal Guenther Steiner having revealed earlier that his mechanics were without tools and – more importantly – engines, saying: “Basically, we still cannot work on the cars. Even if some of the parts were there, we could not work on them because we don’t have the tools.”

The issue seemingly stems from heavy fog which descended on the Mexico City Airport on Tuesday morning and delayed many of F1’s freight planes. All expected freight is due to arrive on Thursday, however, and F1 has stated it expects the delays to have “no wider impact on the race weekend”.

A triple-header covering three continents – for the races in Mexico, Brazil and Qatar – was always likely to present a few logistical nightmares for the F1 paddock and push the teams to their limits. It would appear that mother nature has decided to make them work a little harder – or certainly later – for part two this weekend.