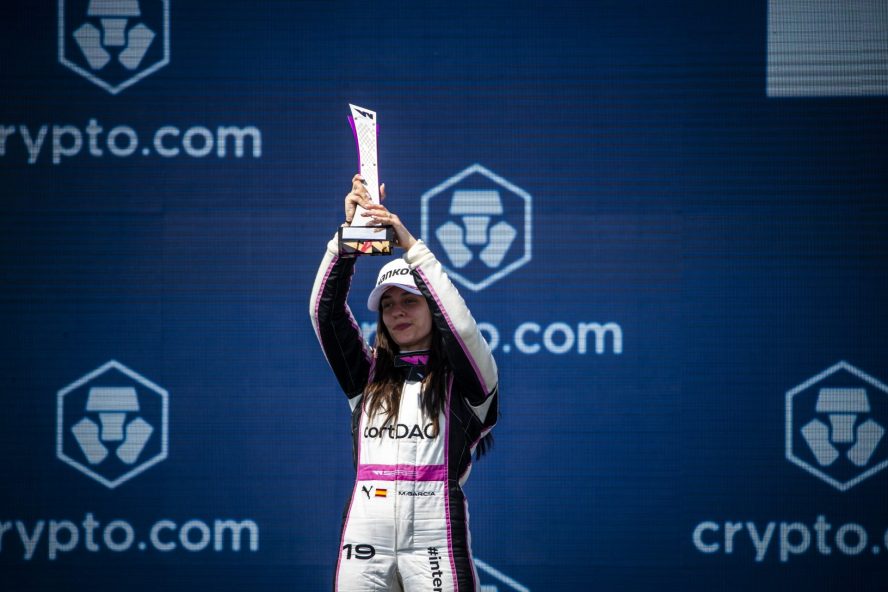 The drama from race 1 in W Series continues as Marta Garcia received a 10 seconds penalty for her contact with Emma Kimilainen, hence going back to 11th in the final race classification. Moreover, Eaton, Chambers, and Wohlwend also all received post-race penalties.

During the last racing lap of race 1, Puma driver Emma Kimilainen, who had led the race since the lap before but suffered engine issues, and CortDAO driver Marta Garcia experienced a contact that resulted in the Finn’s spinning and losing positions.

While at first Garcia had confirmed she believed the accident to have been a racing incident,  the announcement of her penalty had been somehow pre-confirmed by Emma Kimilainen’s social media, as the Finn expressed her disappointment for the results: “I had once again mega speed and tried to overtake the car in front, Marta [Garcia], already earlier that last lap but succeeded in the last corner from outside. As the stewards also deemed, I left space for her to race clean and maintain the inner line easily but she was not able to do the same for me so she sadly hit my rear tyre when we exited the corner and spun me around”.

The Spaniard now drops back to 11th, meaning Jessica Hawkins gains the second place and Beitske Visser steps on the podium for the first time this season. Garcia’s teammate Fabienne Wohlwend has also been penalized with a 5-place grid drop for race 2 for having caused a collision that led to the retirement of both herself and Abbie Eaton. The Liechtensteiner will hence start tenth from the grid for race 2.

Your #WSeriesMiami Race 2 Starting Grid. 🔢@FWohlwend5 will now start in P10 after receiving a five-place grid penalty for causing a collision. pic.twitter.com/BJyyV0QV5n

Moreover, W Series also announced Scuderia W Abbie Eaton and Jenner Racing Chloe Chambers were both penalized by 30 seconds due to being out of the Safety Car line at the restart. While for Eaton the result of the race doesn’t change as she DNFd due to the aforementioned collision with Wohlwend, Chambers drops from 11th to 13th.

All the drivers will however have the chance to redeem themselves in race 2, coming up at 15:35 GMT. With all the action and drama seen yesterday, Miami proved more unpredictable than expected and will surely grant occasions to many, as the weather might also come into play.