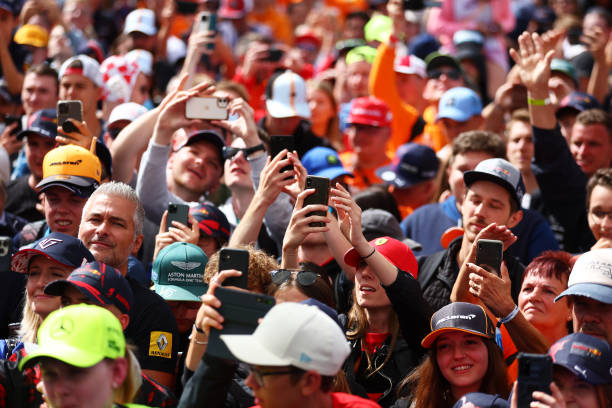 Over the weekend, fans took to social media to share their experiences of being in the grandstands in Spielberg. The most common complaint focused on drunken fans taking the attention away from the racing.

Some mentioned hearing catcalling, misogynistic comments, and racist slurs. Twitter user @superlicense said they have “never felt so unsafe” at a Grand Prix, whilst others were adamant that they will not return to Spielberg.

In response to the allegations, F1 said:

“We have been made aware of reports that some fans have been subject to completely unacceptable comments by others at the event. We have raised this with the promoter and security and will be speaking to those who have reported these incidents and are taking this very seriously.”

F1 went on to emphasise that “this kind of behaviour is unacceptable and will not be tolerated and all fans should be treated with respect”.

Behaviour across the weekend

Television coverage showed crowds cheering as his W13 found the barrier. When asked about the reactions, Hamilton said: “I don’t agree or condone any of that, no matter what. A driver could have been in hospital and you are going to cheer that?

“It is mind-blowing that people would do that, knowing how dangerous our sport is. You should never cheer someone’s downfall, someone’s injury or crash.”

Whilst the reaction was certainly a talking point this weekend, it is not the first incident of its kind. In one of the most memorable crashes in recent history, Max Verstappen suffered a 51G crash at the 2021 British Grand Prix. At the time, many fans were accused of celebrating the incident. The Dutch racer was also booed by crowds at the same circuit last weekend, as British fans came out in their thousands to support Hamilton.

F1 personnel have commented on fan behaviour numerous times. Booing and jeering are far from a new spectacle in this sport, but it has arguably become more prominent. Coming off the back of the Hamilton/Verstappen rivalry in 2021, the division between fans is greater than ever.

A step too far

Supporting a certain driver is a beautiful element of F1, and indeed every sport. Everyone can tolerate a level of competitiveness, but the horrendous treatment of fellow fans this weekend is unacceptable.

There have been dozens of allegations circulating on social media. You can find a thread of some of the claims here.

With F1 swearing to investigate the reports, acclaimed journalists such as the BBC’s Jennie Gow have weighed in.

Christian Horner also commented on fan behaviour. Referencing the reaction to Hamilton’s qualifying crash, he said: “The team love racing here and the support we get is incredible. Passion is great but it shouldn’t spill over into jeers at our opponents.”

No one wants their unique Grand Prix experience ruined by the questionable behaviour of some fans. Let’s hope that the focus is placed back on the racing this afternoon, rather than the torment of other fans.