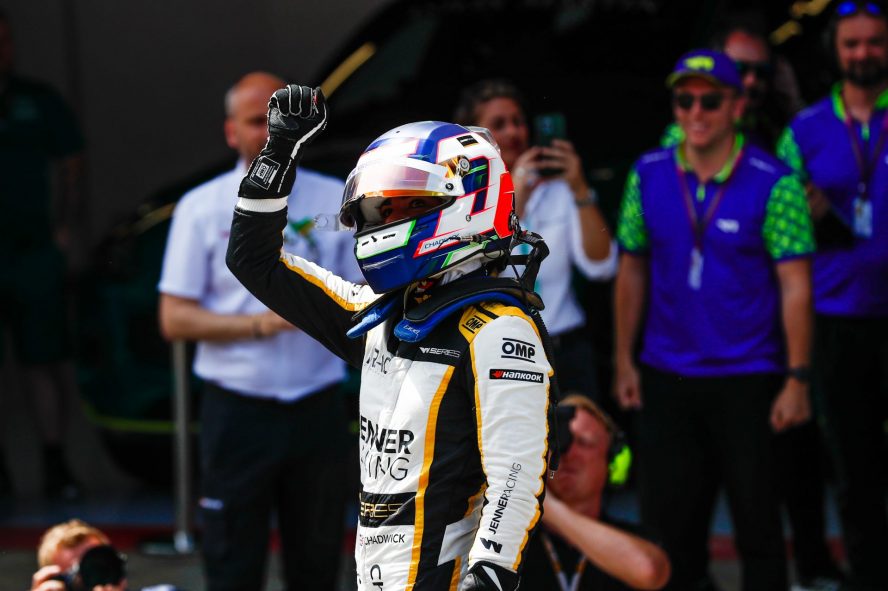 Jamie Chadwick has won the W Series French Grand Prix, after fighting her way up from third to first within the race’s opening corners.

The two-time champion was demoted from pole position ahead of the race for crossing the pit exit line on the way to her second qualifying run yesterday.

However, having told Skysports that the incident was “completely her fault,” she was able to fight back in the Grand Prix, snatching first place from pole sitter Beitske Visser by turn three after her tentative start, and Nerea Marti’s disastrous one.

While Visser did contest the lead following the second safety car in an eventful race, Chadwick was ultimately able to hold on, and clinch her seventh victory in a row.

“I felt like I needed to make amends today, so really happy,” Chadwick said after the race. “Visser kept me honest initially, so I did the move back after the safety car. I’ve just got to keep my head down after that and get another one [win].”

The Grand Prix ended before it really began for Abbie Eaton, who tried to find a gap between Marta Garcia and Belen Garcia that wasn’t there off the start, causing a crash that sent her up onto two wheels, and slammed her to the ground.

While Eaton was thankfully okay given that she suffered a back injury last year, she was out of the running, and the resulting safety car allowed Chadwick to take full advantage and snatch first from Visser.

However, when Emely De Heus took out Chloe Chambers in turn four, triggering a second safety car, Visser made a more aggressive move on the reigning series champion during the restart, taking the lead into the first corner. Chadwick fought back, going around the outside at turn three once again to retake first place, and from then onwards the Brit seemed destined to win.

As the race wore on, Visser fell back through the field to fourth, promoting Belen Garcia into second. The Spaniard attempted to chase Chadwick down, at one point setting the fastest lap of the race, and though she ultimately wasn’t able to, she still scored her first ever podium.

“The last few weeks I’ve not been feeling well, so this really feels like glory,” revealed Garcia after the race. “I’m so happy, I enjoyed the race a lot. I could fight from the start so everything went well.”

Elbows out racing on the restart, it's a battle for P1. #WSeriesFrance 🇫🇷 #WSeries #F1 pic.twitter.com/sQtnf4pZyk

By Gracie Talia Ross19 hours ago

All eyes may have been on the frontrunners at the safety car restarts, but a lot of the Grand Prix’s action occurred further down the field.

Marta Garcia and CortDAO teammate Fabienne Wohlwend fought tooth and nail throughout the race, with the pair coming close to contact on multiple laps, and the former going on to triumph on the race’s penultimate lap.

Emma Kimilainen, who arrived at the event in fourth place in the standings, was also caught up in both safety car incidents. As such, having started out of position, the Fin was unable to make much progress up the order, and she went on to finish in twelfth.

Likewise, Abbi Pulling started the race second in the standings, but she only managed to secure ninth place at Paul Ricard. As a result, Chadwick’s fifth victory in five races this season sees her lead extended at the top of the W Series championship to a whopping 70 points.

Next up in the calendar is Budapest, Hungary, the fifth-last race of the year.