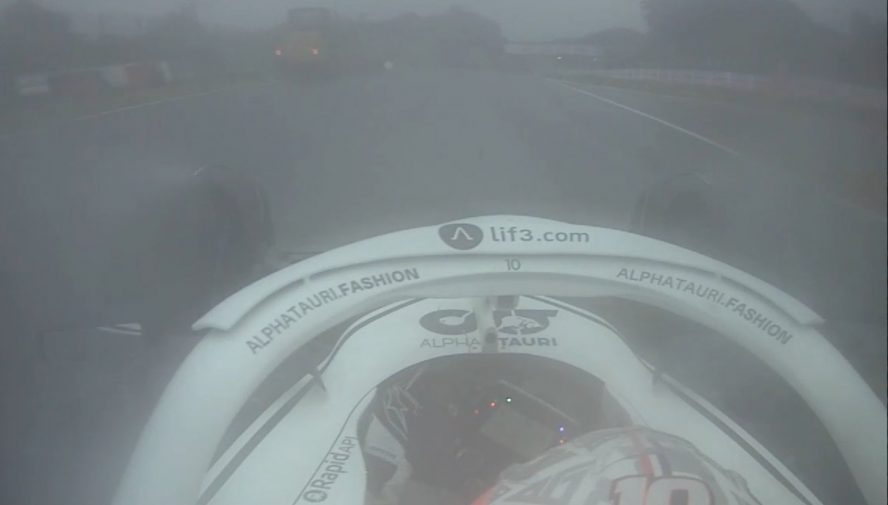 Update: Verstappen handed another shot at the title with race restarting under safety car

Max Verstappen’s bid to become a two-time Formula 1 world champion has been reignited, with the Japanese Grand Prix restarting after a lengthy red flag period due to heavy rain.

While the race initially started with the entire field on intermediate tyres, and Verstappen just holding off a charging Charles Leclerc, what followed was a series of wet weather incidents.

The biggest of these saw Carlos Sainz aquaplane and spin at high-speed into turn 12, sending him into the barriers, and bringing out the safety car.

With track conditions worsening and Sainz’s car still stranded on the left side of the track, the red flag was then brought out. Controversially, however, a tractor was brought on-circuit before last-placed Pierre Gasly had passed the scene of the crash.

The incident, which took place eight years after Jules Bianchi’s fatal crash with a recovery vehicle at Suzuka, has since drawn heavy criticism from Sainz and Alex Albon, the latter of which labelled it “extremely dangerous.”

For its part, the FIA has issued a statement effectively blaming Gasly for “driving at high speed” past the vehicle, but also committing to investigate the issue further after the race.

Sainz: hit a tractor and “it’s over”

Gasly’s incident occurred while the Frenchman was trying to catch the safety car, after he pitted for a new front wing at the end of the first lap.

As the FIA has pointed out, “the safety car had been deployed and the race neutralised,” and the “red flag was shown before Car 10 [Gasly] passed the location of the incident,” yet he passed at high-speed.

However, the tractor itself was clearly positioned on-circuit and the red flags were only deployed moments before Gasly went by, giving him little time to react.

Sainz, whose abandoned car was at the centre of the incident, laid the blame squarely at the feet of the FIA, for deploying the recovery vehicle despite the race being red-flagged.

“I don’t know if people understand, but even behind the safety car we are going at 100-150 kph, and at those speeds we don’t see anything,” said Sainz.

“If one driver decides to get a bit out of the racing line, has some small aquaplaning or has to change a switch on the steering wheel and gets a bit out of line and hits a tractor, it’s over.

“I still don’t know why we keep risking having a tractor on-track as it’s worthless. You [the race director] were going to red flag it anyway, so why risk it?”

Can Verstappen win the title?

Sainz’s crash followed an action-packed start to the race. Sebastian Vettel, having netted an impressive ninth position in Japanese Grand Prix qualifying, made contact with Fernando Alonso on the way into turn one, causing the German to spin-out.

Alonso then clashed with Lewis Hamilton on the way into the hairpin, but their battle was brought to a stop when they became the first to pass Sainz’s damaged Ferrari.

Verstappen arrived at Suzuka needing to leave with a 112-point lead to clinch the title, with only three full races and a sprint race in Brazil left for Charles Leclerc to chase him down.

With the race due to restart under the safety car, and all the drivers on full-wet tyres, the Dutchman will now get another chance to clinch his second crown.

If the drivers can complete more than 16 laps of racing without the safety car, the race will be classified as ’25-50% complete,’ meaning that 13 points will be awarded to first place, with second getting ten and third place earning eight.