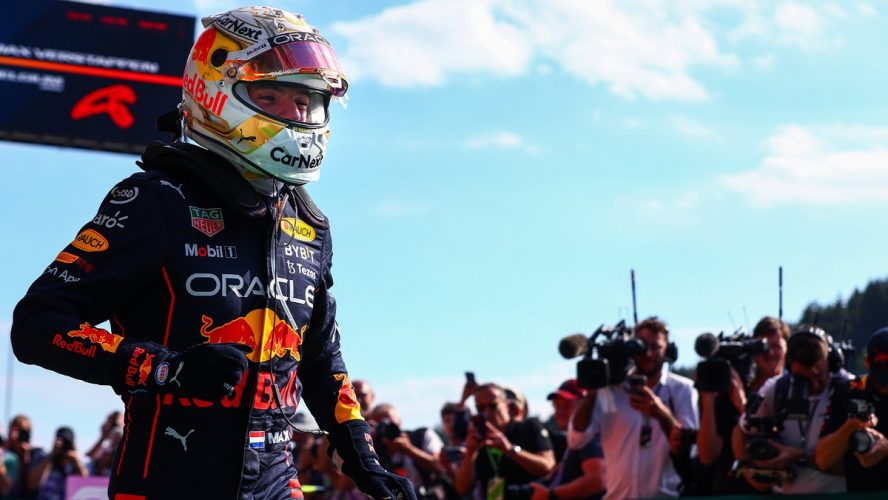 F1's first race since the summer break saw passing aplenty, and luck playing its part in the result

Excitement was in the air in the Ardennes Forest as F1’s contenders took to the grid to kickstart the second half of the 2022 season.  The infamous Spa weather behaved itself, with the farcical scenes of 2021 long forgotten.

Qualifying was far from a simple affair as multiple penalties for drivers were applied. The reason for the chaos was that teams took the opportunity to minimise the impact of taking new engine components. With Spa, a track famed for its overtaking, cars can cut their way through the field more easily than on tracks like Zandvoort.

The offseason drama is sidelined for now, as the F1 spectacle renews. Daniel Ricciardo did sadly come across as a lonely figure in the paddock. Pictures on Twitter showed the Australian kneeling in the pitlane with his music on very much isolated. He also did not take part in the track parade.

Verstappen would start P14.  Leclerc: P15. The scene was set for a nail-biting race at Spa that would see the championship contenders coming through the pack. McLaren ace Lando Norris starts P17 after showing pace in qualifying.  Leclerc and Verstappen both took the aggressive option, starting on soft tyres. Pierre Gasly and Yuki Tsunoda opted to start from the pitlane following penalties.

Chaos at lights out

At lights out Carlos Sainz got a quick start, Fernando Alonso moved into P2, while the two Mercedes moved up to P4 and P5.  Everyone behaved at La Source, with the field heading down to Eau Rouge and the Kemmel straight.

Chaos ensued as the field headed towards Les Combes. Lewis Hamilton is sent up into the air by Alonso and retires after performing an aggressive pinch move on the Spanish driver, leaving Alonso nowhere to go. Sergio Perez took advantage of the chaos, moving into P2. The title contenders battle with an aggressive move, by the Dutchman.  Not content with just passing Leclerc, Verstappen passes multiple cars to be an impressive P8 by the end of the first lap. The Aston Martins battle at Les Combes on lap 2, with Vettel pushing teammate Stroll into the gravel.

Nicholas Latifi goes wide in Les Combes and loses the rear. The Canadian swerves across the track, collecting Valtteri Bottas, the Alfa Romeo beached in the gravel.  The Safety Car deployed to clear the stricken Alfa Romeo. Latifi continues but pits for a new front wing. Hamilton could only stare at the rear of his W13 as he contemplated another below-par afternoon.

Leclerc’s afternoon at Spa became even more difficult on lap four. The Ferrari dives into the pits under the safety car after seeing smoke coming from the right front.  A tear-off lodged in the brake duct proved to be the cause. Leclerc comes over the radio targeting an ambitious one-stop race on 40 laps. Leclerc’s afternoon would only get more difficult from here, the Ferrari now at the back of the pack.

The Safety Car pits as lap six begins. Sainz locks up at the final corner and compromises Perez. George Russell’s Mercedes attacks the Red Bull into La Source but needs instead to defend from Alonso’s Alpine. The Safety car has played beautifully into Verstappen’s hands, only eight seconds off the lead on virtually new soft tyres, and moves into P6.

The safety car is deployed as Latifi tags Bottas and both cars run off the track. pic.twitter.com/Rb6BPC8ZPZ

By lap eight, the races of the title contenders start to diverge. The Dutchman was now up to P4, having overtaken two cars in two laps. Leclerc was stuck behind a DRS train, passing both AlphaTauris for P14. Ferrari, seeing the impending danger tells Sainz the target is now Plan B.

By lap 11, The Red Bulls move to within DRS range, and Perez closes the door on Verstappen. Verstappen says “we’re losing a silly amount of time”, as Sainz pits for new mediums, joins in P6 stuck behind Ricciardo, but precious time is lost.

With Verstappen pulling away with a seemingly endless pace, Perez then overtakes Sainz for P2 on lap 21. In the battle for P4 in the Constructors, Alonso runs a comfortable P6, while Ricciardo closes on Alex Albon in P9. Norris runs in P13, bogged down in a DRS train.

Vettel runs a brilliant P7, three seconds ahead of the second Alpine of Ocon. Russell adds more pressure to Ferrari’s underwhelming race, as the British driver starts catching Sainz at the rate of a second a lap.

Sergio Perez is up to second and the Red Bulls are flying! 🔥

Stroll finds himself in a position to overtake Ricciardo on lap 24 after Albon blocks a move from the Australian. Sainz told to mind the bumps.

Lap 26: Ferrari double stack their cars. Sainz goes onto hard compound tyres, while Leclerc fits medium. Both cars ahead of the fast Williams of Albon. Leclerc told to slowly bed in his new tyres.

Lap 27: The battle for P9 intensifies. Ricciardo, Stroll, Norris and Zhou all in a DRS train behind Albon. Albon and Stroll pit, the Williams mechanics allowing Albon to stay ahead. Stroll’s misery is compounded as Latifi flies past.

Lap 28: Perez pits and comes out ahead of the Ferrari of Sainz. Russell continues to push to overtake Sainz when he stops. Alonso passes Norris as the British driver has yet to stop.

Lap 29: Leclerc finds himself P7 after his pitstop, overtakes Ocon for P6, while Alonso ends McLaren’s hope of a good result by overtaking Ricciardo, with both McLarens yet to stop. Russell pulls into the pits, with just under a 10-second gap to Sainz to make up.

Lap 30: McLaren goes aggressive with Norris, fitting on the mediums at the British driver’s pitstop. Verstappen then pulls into the pits for an easy stop, the championship leader comfortably maintaining his lead on exit. He then sets off setting fastest lap after fastest lap, his speed unexplainable. Leclerc continues his charge, taking Vettel for P5. The Aston Martin is still on for a respectable P6, though, with just 12 laps to go.

Norris overtakes Zhou for P13, as his teammate requests to stay out for three additional laps, fearing an undercut. Russell continues to close on Sainz, Ferrari no doubting hoping for more speed in Zandvoort. The Scuderia are now at real risk of not having a car on the podium. Lap 34 sees Russell almost a full second faster.

"Their jaws have probably hit the floor" 😫

How big of an opportunity did Ferrari miss today? 😬 pic.twitter.com/tgX4zBRwUz

Lap 34-38: Vettel pits and resumes P8, a battle brewing with old title rival Alonso. Ocon overtakes two cars and finds himself behind his teammate. P6 and P7 mean Alpine will extend their lead over McLaren. To compound McLaren’s woes, Norris in P12 says he is struggling with grip, only for his engineer to state it is “too late for plan G”, much to the ridicule of the commentators.  The outgoing Ricciardo is down in P15.

Vettel continues to give Aston Martin hope, running in P8. Lance Stroll is tantalisingly close to the points but is stuck in P11 as the Williams of Albon continues to hold position in P10.

As the race entered its closing stages, the battle for P3 becomes the focus of intrigue. Russell’s Mercedes continues to close on Sainz but is running out of laps. After running wide at Stavelo, the battle looks to be over. Leclerc pulls into the pits as the last lap starts to fit softs for the fastest lap. Instead, Alonso sneaks past for P5, in another questionable strategy call.  To complete his miserable afternoon at Spa, Leclerc incurs a five second time penalty for speeding in the pitlane.