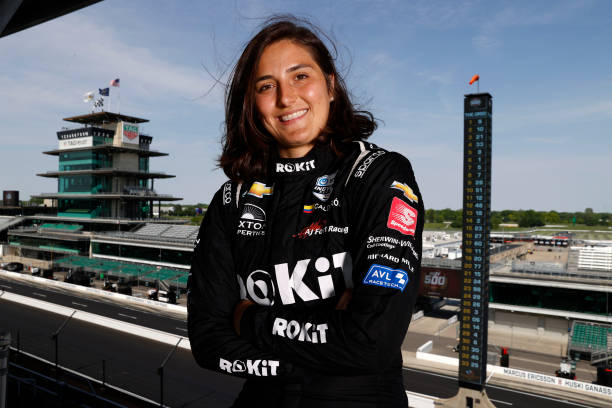 INDIANAPOLIS, IN - MAY 24: NTT IndyCar series driver Tatiana Calderon poses during a photo shoot at the Indianapolis Motor Speedway in Indianapolis, Indiana. (Photo by Brian Spurlock/Icon Sportswire via Getty Images)

Calderon replaces Bolukbasi for the remainder of the 2022 season

Charouz Racing System has announced that Tatiana Calderon will replace Cem Bolukbasi for the remainder of the 2022 Formula 2 season.

Calderon is making the return to Formula 2 for the final four rounds of the season. The team has announced that she’ll be replacing Cem Bolukbasi, whose contract has been “terminated by mutual consent.”

Bolukbasi was the first driver to start racing in esports and make the move to Formula 2. He sustained an injury in the second round of the 2022 season and missed the following round at Imola.

From there he returned, but only managed a best-placed finish of 11th throughout the season.

Why exactly Charouz chose to replace him for the final four rounds is unknown. But for the rest of the season, Calderon will be partnering Enzo Fittipaldi and driving the #23 car.

“We’re very happy to welcome Tatiana,” said Charouz team principal Antonin Charouz. “We have been following her for a long time, she’s a very competitive driver and her experience will surely be really valuable for the team. This weekend will be very important for us, because we have four rounds left and a demanding triple header ahead, that will require our best effort in order to arrive at Abu Dhabi to close the season on a high.”

Calderon made her Formula 2 debut in 2019, racing for BWT Arden alongside Anthoine Hubert. She failed to score points at all that season, finishing 22nd overall with a best result of 11th place.

After jumping around to several different series, Calderon signed a contract with A.J. Foyt to race road and street courses in IndyCar in 2022. Her best result came at the Indy GP when she finished 15th.

Sponsorship issues saw the Foyt team unable to continue running Calderon’s car, and she stopped racing after Mid-Ohio. Now, she’s making the return to Formula 2, and has stated her excitement about this move.

“I’m really excited about my return to the Formula 2 Championship, I still can’t believe I’m back. It’s been a long while since I drove the car, but it is an amazing opportunity which I want to make the most out of. I’m very thankful to the Charouz Racing System and I’m really looking forward to this busy triple-header of races and beyond.”

Formula 2’s triple-header starts this weekend with Spa. From there they’ll go to Zandvoort and then Monza, before a two-month-long break.