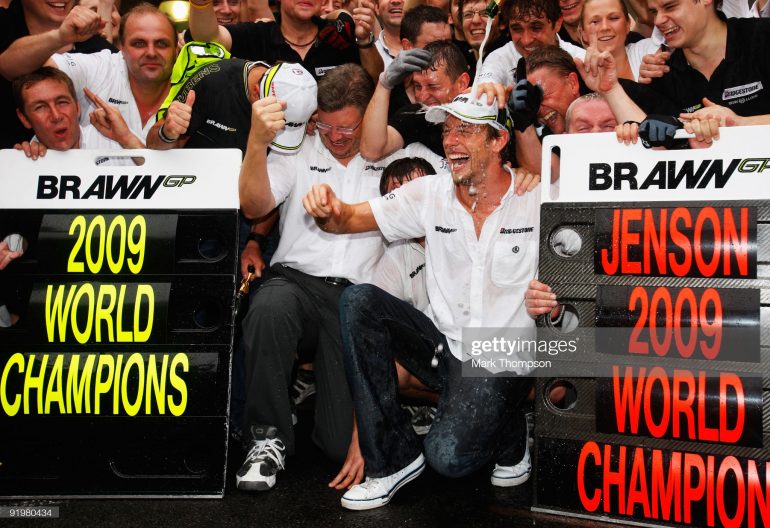 Brawn GP is set to be on the big screen

This weekend it was revealed that Brawn GP’s story is set to hit the silver-screen.

The British Grand Prix was worthy of an Oscar. It featured a Maiden pole position & a maiden victory for Carlos Sainz. It also featured Schumacher getting points and a pretty dramatic opening lap.

That being said, it will be a different motor racing story that will be hitting the big screen. There were many stars in attendance at the British Grand Prix including Tom Cruise and Gordon Ramsay. However, Keanu Reeves generated the most buzz because of the reason he was there.

No pressure, team, but you've got an audience…

Keanu Reeves is set to create a documentary serialling the incredible 2009 season which saw become Brawn GP victorious. Reeves was there throughout the whole weekend and was meeting with Brawn GP star Jenson Button and Ross Brawn himself, ofcourse.

The Hollywood star got stuck in with all the action and got noticeably soggy during Saturday’s wet practice and qualifying sessions. Reeves enjoyed Saturday’s excitement saying:

I don’t know what to say.. I’m Flabbergasted“

The film is still in the early stages and doesn’t appear to have a set production or release date. Speaking on the topic, Reeves said that Brawn GP’s story was “remarkable”.

We want to tell that amazing, remarkable story”

Over the weekend, Reeves spent time with Jenson Button. Button, who won the championship with Brawn GP in 2009 will obviously be a huge part of the story.

Reeves mentioned that a friend of his was telling him what happened in 2009 in F1 and that it inspired him.

“There is so much to talk about from the outside, a friend of me was telling me the story and I was so struck by it.”

It’s not the first documentary of film made about the sport. There have been incredible documentaries about Senna and Schumacher and brilliant feature films made about Lauda and Hunt (Rush). However, choosing to a documentary on Brawn GP is new for the big screen.

Reeves commented on his thought process behind the documentary:

“So we were like, ‘let’s tell that story’ and it’s been really great to be able to learn more about what was going on in Formula 1 that year.

This is not the only film about F1 in the works. There is currently a film starring Brad Pitt being made which is set to be released in 2023.

As Formula 1 is gaining more popularity, there is lots to look forward to on the big screen.