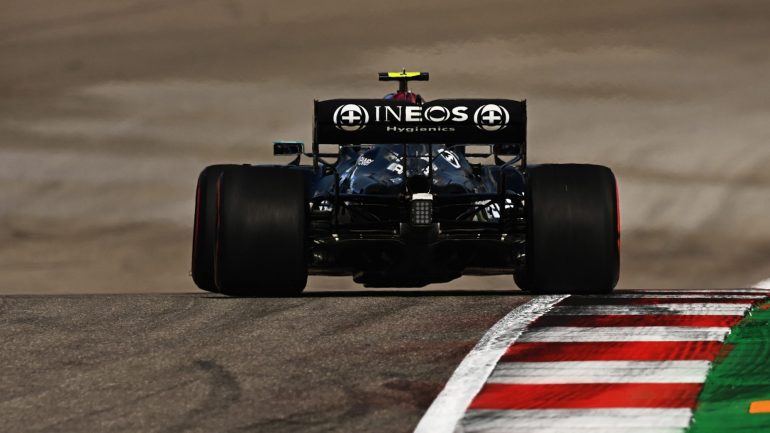 Bottas on top in first practice as F1 returns to US

Mercedes’ Valtteri Bottas set the early pace in Austin but will receive a five-place grid penalty for using his sixth internal combustion engine of the season.

Bottas has now doubled his permitted allocation for the part and will take his third engine-related grid penalty this weekend.

The Finn was 0.045 seconds ahead of teammate Lewis Hamilton and a further 0.932 secs faster than Red Bull’s Max Verstappen.

Formula 1’s return to the United States has been much anticipated in the buildup to the weekend and conditions appear to be different than those usually experienced by the teams at this time of year in Texas.

Temperatures were high for first practice and it looks like the soft tyre – which most of the field set their best time on – will not be utilised much on Sunday.

The session was stopped early on due to Fernando Alonso’s Alpine breaking down at the end of the back straight.

On the restart, it looked like Mercedes had the pace advantage over Red Bull with first Hamilton then Bottas topping the timing sheets.

Charles Leclerc was caught out by the bumpy nature of the circuit and had a spin in the twisty first sector, but was good enough for fourth ahead of Ferrari teammate Carlos Sainz.

Lando Norris’s McLaren was eighth, ahead of the Alfa Romeos of Antonio Giovinazzi and Kimi Raikkonen.

Mercedes have won all but one race in the US since 2014 – and they made a promising start to this weekend.

Bottas, who ended the session top, was almost a second quicker than the Red Bull of Max Verstappen.

Crucially in the world championship picture, Hamilton looked to have the advantage over his Dutch rival, who he trails by six points in the standings.

Perez was once again off the pace in the other Red Bull and ended the session in seventh.

The Mexican secured his third podium of the year last time out in Turkey but didn’t show any signs of continuing the form early on in Austin, ending first practice 1.924 secs slower than Bottas – but the Red Bull driver did use the hard tyre while the top three used the soft compound.

McLaren had a difficult weekend in Turkey with Norris finishing seventh and Daniel Ricciardo down in 13th.

And once again the Woking team struggled to make an impact in Texas; Norris ended the first session of the weekend seventh while Ricciardo could only manage 15th, 2.584 secs off the pace.

Concerningly for McLaren, Ferrari showed good pace in practice. Leclerc was fourth and Sainz fifth – with the Spaniard using the mediums to set his fastest time.

There was almost a second between Lewis Hamilton in P2 and Max Verstappen in P3#USGP 🇺🇸 #F1 pic.twitter.com/na8rRqRiKm