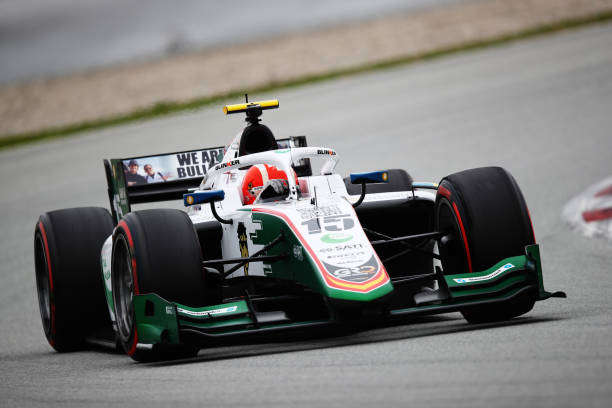 Barcelona proved a dull morning with low track temperatures reducing the run times for the teams.

Current championship leader Felipe Drugovich topped the times in this morning’s session with a 1:29.755. Following closely behind was ART Grand Prix’s Théo Pourchaire who put in a 1:29.920 placing him only 0.165s from the top spot. DAMS’ Ayumu Iwasa claimed P3 setting a time of 1:30.124

With only two drivers breaking the 30 lap mark, Van Amersfoort’s Jake Hughes claimed the most track running of the session with 37 laps.

The short running stemmed from the red flags being brought out three times. Trident’s Calan Williams started the chain after spinning off at Turn 2. Carlin’s Liam Lawson was the next to bring out the red flags; his car stopping at Turn 10 after setting a purple middle sector. The final flags were caused by Charouz’s Cem Bolukbasi who ended up in the barrier at Turn 9.

Despite the short run times, the field proved very close with the Top 17 drivers setting times within a second of each other.

Moving into the afternoon the track temperatures had improved and with this times began to fall.

Boschung topped the times with a 1:27.929 placing him over a second faster than Hitech’s Marcus Armstrong in P2. Making him the first driver to break the 1m 28s barrier. Determined to close the gap Armstrong pitted for softs and returned to the track.

He couldn’t however compete with Boschung. Unable to join him in the 1m 28s bracket, Armstrong settled with a 1:28.170. Iwasa kept his consistency placing P3 this time with a time of 1:28.331

Increased run time meant the red flag time was reduced with only two incidents. Hitech’s Juri Vips was the first to bring out the flags after catching the barrier at Turn 3. Moving through the session Carlin’s Logan Sargeant brought the final flags out after stopping at Turn 1.

Boschung was the clear winner of today distancing him from the rest of the grid.

The teams will be hoping for temperatures to improve over the next two days to optimise track time.

The top 10 lined up as follows: