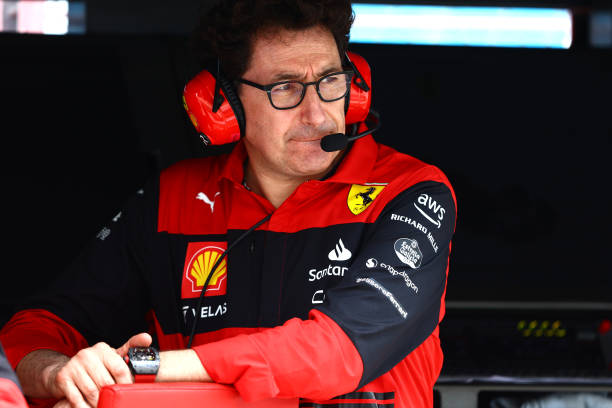 MIAMI, FLORIDA - MAY 07: Scuderia Ferrari Team Principal Mattia Binotto looks on from the pitwall during final practice ahead of the F1 Grand Prix of Miami at the Miami International Autodrome on May 07, 2022 in Miami, Florida. (Photo by Mark Thompson/Getty Images)

Binotto unconcerned about Red Bull’s pace – what does he know?

Red Bull have the pace, but that's not what Ferrari are concerned about.

Mattia Binotto has said Ferrari need to “respond” to Red Bull’s consecutive success, but it is not the pace of Red Bull that is worrying.

The inaugural Miami Grand Prix saw Max Verstappen continue his success from Imola. The Dutchman battled with Ferrari’s Charles Leclerc under the Miami sun and went on to claim the race victory. Five races into the season and Verstappen has won every time he sees the chequered flag. Whilst Leclerc is still leading the championship, Mattia Binotto has said Ferrari need to “respond” to Verstappen’s continuous success.

Miami saw a front-row lockout by the Scuderia. The two Red Bull’s qualified P3 and P4, so were ready to attack straight from lights out. Carlos Sainz had a difficult race, enduring physical struggles, but he still managed to hold onto third.

With the result from Miami, the lead in the Constructors’ Championship between Ferrari and Red Bull has decreased to only six points. Binotto has shared his thoughts on this and what is worrying him the most about Red Bull.

Miami was a circuit with a mixture of very long straights and several corners. The Scuderia can handle the corners better as they have better downforce, which was evidenced by Leclerc closing the gap to Verstappen during the race. But Red Bull have exceptional pace down the straights.

Despite a podium finish for both drivers, Binotto said that they “can’t be completely happy” with Miami because they are “a few tenths per lap” slower than Red Bull. When asked if he is concerned about Red Bull’s pace, Binotto said:

“I would say not [concerned] because I don’t think that the difference is huge. It’s a matter of, maximum, a couple of tenths in the race and we shouldn’t forget we locked out the front row.”

Miami was a good weekend for Scuderia, even though they did not win the race. Binotto commented saying that they “can’t be too disappointed, given that we are leading both championships”. However, he knows that Ferrari “now need to respond” because they “are keen to get the job done and there are still a lot of races to go.”

Qualifying demonstrated the capabilities of the F1-75s and showed that Ferrari “had a better performance” than their rivals. The team did bring some limited upgrades to Miami, but Binotto has said that they are not enough “in order to keep the pace”. He added that the team “will need to develop [themselves] with new upgrades” in order to keep up Red Bull.

One thing that is playing a major part in the season this year is the budget cap. Each team has a limit of $140million and Binotto is concerned about Red Bull’s various upgrades fitting into this quantity.

Red Bull brought upgrades to Imola, and with some reliability issues still in play – Perez nearly had to retire from the race in Miami – Binotto is curious as to how much they are developing.

By Samuel Coop9 hours ago

He said: “If there’s any concern, it’s how much they’re developing considering the budget cap – that’s certainly a concern.” Binotto noted that “it’s true that Red Bull have improved their car since the very start of the season, and they introduced upgrades.”

He went on to say that he hopes Red Bull “will stop developing” at some stage. Binotto does not “understand how they can do that” otherwise and remain within the budget cap.

When speaking about the development of the F1-75, Ferrari’s Team Principal said “I always said we needed to wait five races to access the relative competitiveness”. We are five races in and Ferrari lead both championships and “have not developed” the car “since the start”.

The next race is the Spanish Grand Prix at the Circuit de Barcelona-Catalunya. It is typically the time when teams bring more upgrades and Ferrari are no exception.

Binotto has said “in the next races it will be at least [their] turn to try to develop as much as they can on the car by introducing upgrades.” The car they currently have is “a good package”, but they “will have some upgrades at Barcelona”, which the team hope will “put [them] in the fight with the Red Bull”.

Leclerc and Ferrari still lead the championship, but will they be able to maintain the lead after Barcelona?