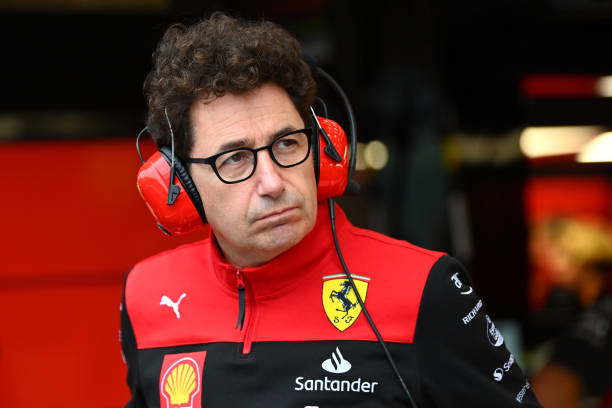 Binotto hits out at FIA over concerning budget cap rules

From Ferrari’s perspective, the 2022 financial regulations are not being monitored closely enough

As Ferrari drift from their championship dreams, Mattia Binotto has cast doubt on the budget cap rules.

Rumours suggest that Red Bull are planning upgrades for the remaining races that will most likely be brought to Singapore. If this is the case, Max Verstappen’s dominance could become even greater, much to Ferrari’s detriment.

With teams’ spending restricted in 2022, Binotto is worried that this is not regulated harshly enough.

Ferrari team principal Binotto recently referred to the cap as a “very green regulation”, as reported by BBC Sport.

He explained: “The number of people in the FIA monitoring it is very little. It has to improve for the future because it would be really bad if somehow a championship was dictated by a financial regulation and not technical or sporting.”

Despite promising early signs that Ferrari were finally back, their season has gone from bad to worse in recent months. Carlos Sainz secured another podium in the most recent Belgian Grand Prix, but his performance was no match for Verstappen’s brilliance.

Optimism is low, points are dwindling, and Charles Leclerc has even taken to sarcastic social media posts. With all of this taken into account, Binotto’s comments may seem like simple desperation.

P9 in Lap 1 then tear off in the brakes that causes front right brake overheating, have to stop to take off the tear off off the brakes, come back to P5, took a 5 seconds penalty for being too quick in pit lane because of a burnt sensor caused by the first issue. Beautiful day! pic.twitter.com/8TbcsiqzEt

Implying that teams could easily slip through the cracks of the budget rules is a low blow that is clearly aimed at Red Bull. Binotto admitted that the team are now relying on Verstappen to not finish races – is this just another attempt to claw back some semblance of success?

Many teams faced the notable issue of their cars being overweight at the beginning of the season.

As Verstappen chases down his second world championship, it is rumoured that his team will introduce a new chassis. This will be four kilograms lighter than the one currently in use, which could improve Red Bull’s performance even more.

Like other outfits, the team has tried to decrease the car’s weight all season. A reduction of this significance would equate to a lap time gain of around 0.14s.

Naturally, this would be ruinous for Ferrari’s remaining title hopes – if indeed any still remain. Whilst Red Bull’s supposed plan has been accepted as fact by many, Christian Horner shut down the rumours (for now).

“No, there is no [lighter chassis],” Horner said. “These chassis will run for the next few races.”

In addition, a Red Bull spokesperson confirmed that the team will stay within the budget cap as they have implemented fewer “upgrades than Ferrari or Mercedes”.

“I cannot know what they are doing, but the budget cap is always a concern. The financial regulations can make differences between teams in the way they are interpreting and somehow executing it. And we know we need a very strong FIA to make sure they are properly focusing, otherwise the regulations will not be fair and equitable.”

He added: “Ferrari would never be capable of introducing a lightweight chassis or a different chassis through a season simply [because of the] budget cap and I would be very surprised if a team is capable of doing it.

“And if they are, it is back to the regulation itself – is it fair enough, is it equitable enough, is the policing sufficient?”

Heading into 2022, the FIA introduced a significant overhaul of the sport’s regulations. This aimed to bring the teams closer together and improve the racing spectacle.

Whilst the general success of this goal is debatable, one of the most contentious points is the budget cap. Before this was introduced in 2021, there was an endless cycle of specific teams being more financially stable than others.

Outfits that started out with greater funds could spend more on research and development, and therefore perform better. They then went on to score highly and secure more prize money, further increasing their budgets.

This budget should (in theory) promote a more level playing field. But if Binotto’s allegation that the FIA are careless in the monitoring of how teams spend it is true, that level playing field is as far out of reach as it was before the cap.