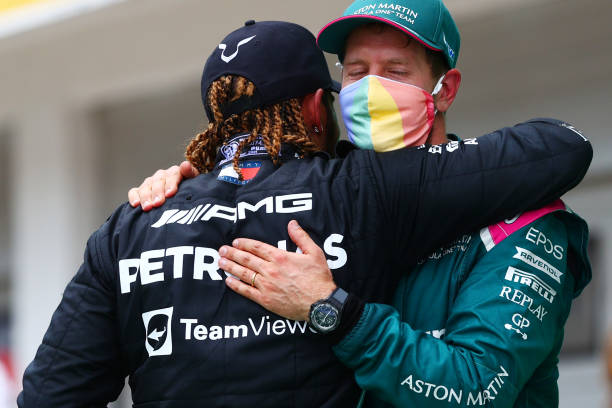 Hamilton, Vettel, and Norris have all expressed their views on Mohammed Ben Sulayem's comments

FIA President Mohammed Ben Sulayem’s controversial comments over politics have caused quite a stir in the paddock and drivers have shared their thoughts.

In every aspect of our lives, politics is present. It has become more prominent within the world of Formula One in recent years. The likes of Lewis Hamilton and Sebastian Vettel have spearheaded Formula One’s relation to certain political issues. The two are not only drivers but activists for change and a better world. McLaren driver Lando Norris is also a driver who utilises his position to talk about mental health.

Hamilton has set up Mission 44 and The Hamilton Commission to help increase diversity and he is a major activist when it comes to human rights. Vettel has donned clothing in support of the LGBTQ+ community and even set up an all-women karting event in Saudi Arabia. McLaren is partnered with the mental health charity Mind. Norris, in support of this, has appeared on This Morning to talk about the importance of mental health.

Earlier this week, the president of the FIA, Mohammed Ben Sulayem, expressed his views on Formula One’s relationship with politics. He said that the sport “should be careful not to be dragged into politics without forgetting [the] roots of motorsports.”

Ben Sulayem went on to comment on the actions of Hamilton, Vettel and Norris. He likened them to Niki Lauda and Alain Prost. When Lauda and Prost raced, they “only cared about driving.” This differs from what drivers are doing nowadays as:

“Vettel drives a rainbow bicycle, Lewis is passionate about human rights and Norris addresses mental health. Everyone has a right to think. To me, it is about deciding whether we should impose our beliefs in something over the sport all the time.”

Those comments caused a lot of controversy in the world of Formula One. Since then, Ben Sulayem has shared on a Twitter a clarification of what he meant.

On the social media post, he wrote that “promoting sustainability, diversity and inclusion is a key priority of [his] mandate.” He clarified with saying he values “the commitment of all drivers and champions for a better future.”

As a driver, I have always believed in sport as a catalyst of progress in society. That is why promoting sustainability, diversity and inclusion is a key priority of my mandate. In the same way, I value the commitment of all drivers and champions for a better future.

Hamilton, Vettel and Norris have all since responded to the comments of the FIA president.

Vettel, who recently appeared on  the cover of Attitude Magazine, admitted that he didn’t really see “much point going into what has been said.” However, what he would like to say is “the topics Lewis is continuing to raise, the issues Lando has been talking about the stuff that has been mentioned, I believe they are topics that are very important to be addressed.

“They are bigger than us and bigger than the sport can ever be. It is important to mention those, to express those and raises awareness, to make people aware that there are still lots of things we can improve on.”

Norris shared Vettel’s thoughts and commented on the “platform” the drivers have. The young Brit is known for being an active streamer on Twitch and interacting with fans. He said that as drivers in Formula One, they “have a platform” that can help “change the world” in small ways, so why not utilise the opportunities?

When speaking about having support from others, he said “the more backing we can have…and the more progress we can make, the better.”

Hamilton responded to Ben Sulayem’s comments but did admit that he hasn’t read the comments so he doesn’t “really know what has been said.” He knows that things can be “taken out of context”, however, he has “heard that [Ben Sulayem] clarified things on social media which is positive and that doesn’t stop us from continuing what we are doing.”

The seven-time world champion continued saying that Formula One has a “bigger audience than ever before” and that “continues to be an important platform to use [their] voices.”

“Every single one of here, within the industry, within our company, do more and speak out more on things, to spark more conversations.

Just look now, for example, I am really proud of what we are doing at Mercedes with out pride start which is the first time I have seen that during my time at Mercedes.”

Hamilton said that “nothing changes for” him. Even “without support”, he will still be an advocate for the issues that are important to him.

W Series commentator, Naomi Schiff, briefly spoke out on the whole controversy. She echoed the drivers thoughts. Schiff said “there’s bigger things going on in the world and more important things that need to be addressed.”

As Formula One continues to grow, the drivers will undoubtedly continue to support global issues that they care about. It is hard to distinguish between bringing politics into the sport, but with the audience it has, the sport can do so much to help improve the world.