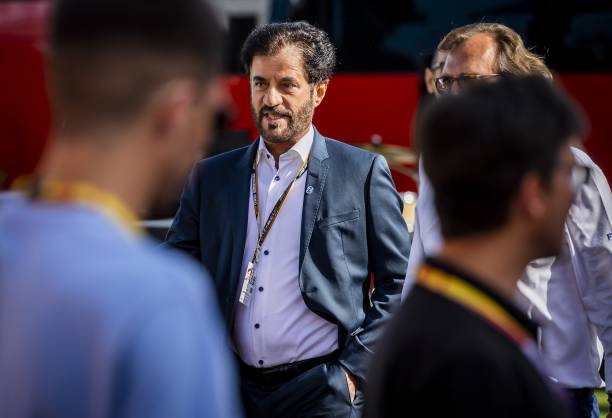 BARCELONA - Mohammed Ben Sulayem, president of motorsport federation FIA, ahead of the F1 Grand Prix of Spain at Circuit de Barcelona-Catalunya on May 22, 2022 in Barcelona, Spain. REMKO DE WAAL (Photo by ANP via Getty Images)

Ben Sulayem: “FIA should be careful not to be dragged into politics”

The President of the FIA has addressed some of the activism that drivers are displaying.

The President of the FIA, Ben Sulayem believes that motorsport is getting too political, and that Formula 1 shouldn’t forget its roots.

In an interview with Grandprix247, Sulayem commented on the political aspect of the sport and the activism that occurs within Formula 1. He believes that drivers should be careful not to attempt to impose their beliefs onto other people, and that the FIA should try to be neutral in political matters.

When asked if motorsport tends to be too political, Sulayem said “You try to separate sport from politics. We have it in our FIA status ‘neutrality’. But I think some people only see neutrality and governance when it suits them.”

He accepted that maintaining neutrality can be difficult, citing his background as making it difficult for him to maintain neutrality.

Where do you have the balance? FIA should be careful not to be dragged into politics without forgetting our roots of motorsports.”

Whether they want to or not, the FIA does get dragged into politics quite frequently. One of the bigger examples is when they race in countries with controversial beliefs. Countries like Saudi Arabia have been accused of sportswashing, using Formula 1 and other sports to distract from their political controversies.

Drivers now vs. then

Sulayem was then asked what he thought the sport should not be, and he brought up examples of today’s drivers getting involved in activism and supporting human rights and mental health initiatives.

“Niki Lauda and Alain Prost only cared about driving. Now, Vettel drives a rainbow bicycle, Lewis is passionate about human rights and Norris addresses mental health. Everybody has the right to think. To me, it is about deciding whether we should impose our beliefs in something over the sport all the time.”

Culture again came into play for Sulayem’s answer, as he brought up his background having a sway in the way he thinks.

“I am from an Arabian culture. I am international and Muslim. I do not impose my beliefs on other people? No way! Never. If you look at my operation in the UAE: 16 nationalities! Name me one federation that has that many nationalities.

“On top, there are over 34% women and 7 religions. And even more Christians than Muslims. I am proud because it creates credibility and merit. But do I go and impose my beliefs? No. The rules are there, even now there are issues when it comes to – for example – jewellery, I didn’t write that.”

His comment about jewellery is about the FIA’s recent enforcement of the rule that bans drivers from wearing jewellery during a race. The rule has been a recent controversy as certain drivers, namely Lewis Hamilton, have pushed back against the ban.

Sulayem has plans to make changes in Formula 1, saying “There are certain things that I am currently not happy with.” What those things are, and what the changes will be, remains to be seen.