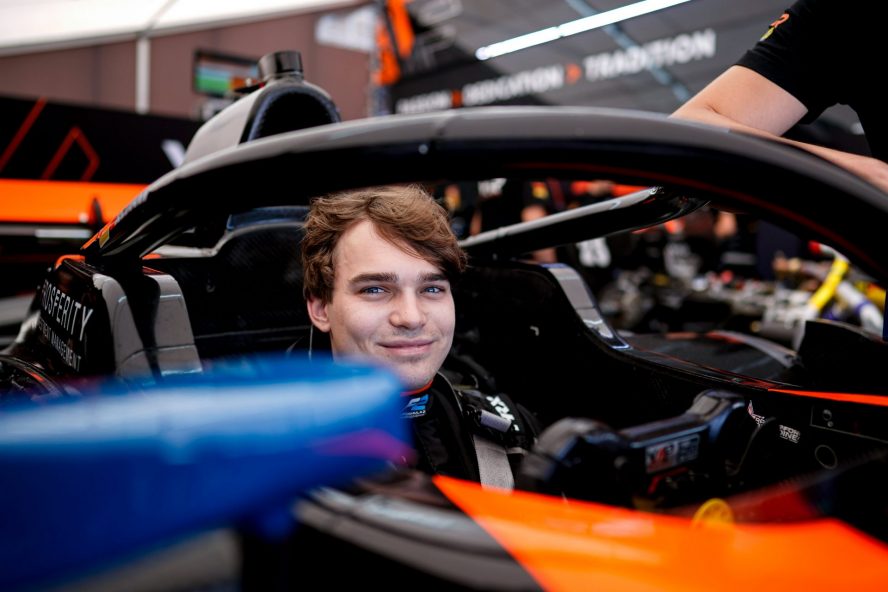 Beckmann Exclusive: Staying in F2 would be “financially very difficult”

David Beckmann has cast doubt over his Formula 2 future, citing financial issues as a potential roadblock to his participation in the series next season.

While Beckmann was drafted in to cover the first four rounds of the 2021 season at Charouz, he was unable to retain the seat for the duration of the year. However, he did compete in the following two rounds with Campos, before his season ended early.

Since then, the young German has been called upon to replace the injured Cem Bolukbasi at Imola, as well as Jake Hughes, who left F2 in August to pursue a greater involvement in Formula E.

However, despite making his latest F2 comeback at Van Amersfoort, Beckmann has told FormulaNerds that he’s not confident of retaining his seat for next year.

“Next year? I don’t think it will happen, because full seasons are financially just very difficult,” explained Beckmann. “Van Amersfoort gave me another chance, but there are also possibilities for them next year.

“So I don’t think so,” he added. “It could still happen, and I would like it to, but I would also have liked to finish last season and it wasn’t possible. It’s always difficult to find enough budget.”

Beckmann first replaced Hughes at Circuit Paul Ricard, after the latter was ruled out having caught COVID-19, with the plan being for the German to remain until Spa at least.

According to Beckmann, Van Amersfoort had “struggled a bit over the year on race pace,” but having “made some good progress” at the next event in Hungary, he says “Frits [van Amersfoort], Rob Niessink and the team decided to let him drive the remaining races.”

Given that he found out he’d be staying a full two weeks after the Feature Race in Belgium, Beckmann says he not only had time to get things sorted with his sponsor but get back into fighting shape.

“It’s always best to train when you drive, as especially with neck muscles, it’s very difficult to train at home and at the gym,” he explains. “It’s not easy when you skip a race to get back into a real rhythm.”

Beckmann says the summer break gave him the chance to get back to the fitness level of his competitors, and could have even contributed to the form that earned him a seat for the rest of the season.

“I managed to get into decent shape and maybe after the summer break it was also a bit better,” he added. “I think everyone was fit on a base that they had to get back into the car, and so was I.

“That’s why the pace was also quite good, and I didn’t struggle so much with the practice. I’d already built my pace.”

Opportunities ahead at Monza?

Speaking after a Zandvoort Sprint Race that saw him finish outside the points in fourteenth place, Beckmann was critical of the lack of on-track action at the circuit.

“The race was very, very boring, except for the first lap or the first two laps,” claimed Beckmann. “You just cannot take a lot of performance [out of the tyres], because they are slowing you down a lot.

“You drive behind a train basically and cannot really overtake,” he added, heaping further scorn on the circuit’s layout.

Despite the German’s reservations about the track itself, he had managed to pick up a creditable eighth place during the Zandvoort Feature Race prior to getting a ten second post-race penalty, and he’s more positive about his chances of scoring highly at next weekend’s event in Monza.

“I always have good pace [at Monza], he said. “Last year at Campos I was a bit unlucky. I locked up twice in the first corner because we had some issues there with braking, so it was a bit difficult for me to get a result and we only finished P5.

“But generally the pace was quite okay… especially the quali. I mean, we were good at Spa, which is a high speed track with low downforce, and I think we can carry maybe a bit of that reference to Monza.

“In general, I think we will have a good result in Monza,” he concluded. “Here [at Zandvoort], it’s difficult because the qualifying was bad. At Monza, even if the quali is not mega, you can still make a nice top six or five finish.”

“It should be possible to at least have a top ten finish in quali, and go from there in the sprint race.”