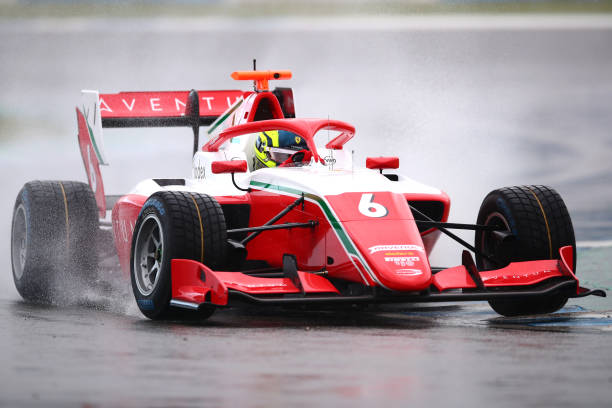 Bearman ‘quite happy’ after excelling in F3 testing

Before heading to Imola at the end of April, F3 teams get two testing opportunities in Spain.

The drivers started out in Jerez yesterday where they faced wet conditions throughout the sessions.

However, the poor weather proved to be more of a benefit than an obstacle for PREMA’s Olli Bearman. He achieved the fastest time of the day with a 1:33.009, almost six-tenths ahead of his nearest rival.

“It was the first real day of wet driving for me in this car,” he explained. “I got a few laps at Valencia in the post-season test (last year), but it was nice to get a full day in really wet conditions. We got the full range of wet conditions, from aquaplaning on the track to damp.

“I have heard it is quite rare to have a full wet day in this car when you’re not at a race event. I got to understand a lot about the wet tyres, which are quite different from what I have used in the past.

“We saw at Spa last year that some teams struggled more than others in the wet. I think PREMA were one of the teams to struggle, so they were probably quite happy to get a full wet day.”

The test was a chance for drivers to try the wet tyres for the first time this season.

Looking back to Bahrain

Bearman took a podium in the opening sprint race, before securing a further eight points in the feature race. As a result, he currently sits third in the standings.

He said: “I was quite happy with my first event as a whole, but there were some things that could have gone better. Qualifying in Bahrain was quite weak for me, so that is something that I am looking to work on.

“I also went backwards a bit at the start of the second race and put myself in the wrong position a few times, but I don’t think it is anything crazy that needs improving on – it is more of a mindset change, which can be addressed easily.

“The positive for us was the race pace – in both races I had a really strong pace. Bahrain is quite a high deg track as well, so that is promising. Our quali needs a bit of improvement, but for a first weekend, I think I set a good baseline for myself for the next eight.”

Previous team champions PREMA are hoping to take victory this year after Trident snatched their crown in the 2021 season.

Check back later for a look at what happened on day two of testing.