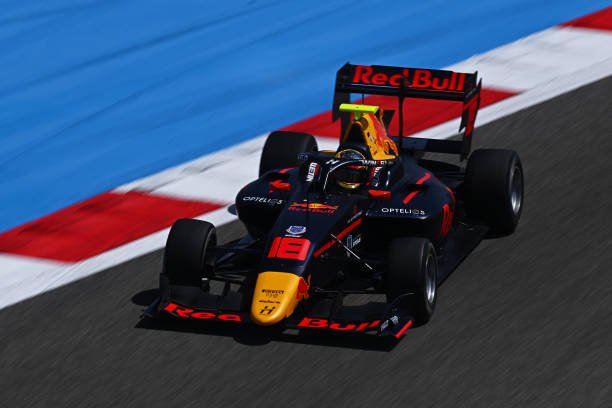 BAHRAIN, BAHRAIN - MARCH 18: Isack Hadjar of France and Hitech Grand Prix (18) drives on track during practice for Round 1:Sakhir of the Formula 3 Championship at Bahrain International Circuit on March 18, 2022 in Bahrain, Bahrain. (Photo by Clive Mason/Getty Images)

Isack Hadjar wins the first Formula 3 Sprint Race of the season. Hadjar’s win comes after PREMA’s Ollie Bearman incurred a 5-second penalty for violating track limits after dominating from Lap 3. P3 went to Alexander Smolyar with the fastest lap going to Zane Maloney with a 1:51.231.

The Sprint Race started with an all British rookie lineup with Carlin’s Zac O’Sullivan starting on pole and PREMA’s Ollie Bearman closely behind in P2. Simmons started at the back of the grid with Manini starting from the pitlane after yesterday’s post-qualifying penalties.

The drama started as soon as the lights went out with Trident’s Roman Stanek gaining a puncture after a Turn 1 collision with VAR’s Franco Colapinto. This incident is still under investigation.

Lap 3 showed an intense battle for P9 between Gregoire Saucy, Caio Collet, and Arthur Leclerc. However, Saucy comes out on the better hand maintaining P9.

As we move onto lap 4, both Colapinto and Stanek pit following from their earlier incident in the first lap.

Two ART drivers took each other out of the race during lap 6 as Victor Martins and Gregoire Saucy collide. This caused Saucy to lose his front wing while Martins gained a right rear puncture putting both drivers out of the race retiring in lap 11.

During this time a battle for P1 was occurring at the front as Bearman overtook O’Sullivan putting himself in the lead. This was the start of Bearman’s dominance in the race.

PREMA’s Arthur Leclerc had an amazing race battling his way through the field from P13. Lap 6 Leclerc overtook Collet and Lap 7 passed Correa placing himself in 6th.

Progressing through the race Lap 14 brought us the start of an impressive battle for third from Hadjar and Maloney. The drama intensifies as we approach Lap 15 as O’Sullivan drops down to fourth allowing Hadjar and Maloney to pass placing them P2 and 3 respectively.

At this point, Bearman is out front on his own with a 3.380 second lead from the rest of the field.

Moving into the final laps, Lap 18 showed us plenty of action. Leclerc carried on his charge through the field taking P5 from O’Sullivan. He also tried a last-minute move on Maloney at Turn 13 for P4 however Maloney managed to hold his position.

Smolyar however did benefit from Lap 18 managing to get passed Maloney at Turn 1 to put himself into P3.

Following this Ollie Bearman was also shown a black and white flag for track limits. After crossing the line we found out that he had received a 5-second penalty. This placed him in P2 after dominating the entire race. Commenting after the race Bearman said despite the infringement he was “still quite happy with the result”. He then went on to say he felt he had “good pace and made a decent start”

This however was exciting news for Hi-Tech which meant their driver Isack Hadjar took the win.

The results and points for the top 10 are as follows:

By Cambridge Kisby12 hours ago

Full Results and standings can be found on the FIA F3 website.