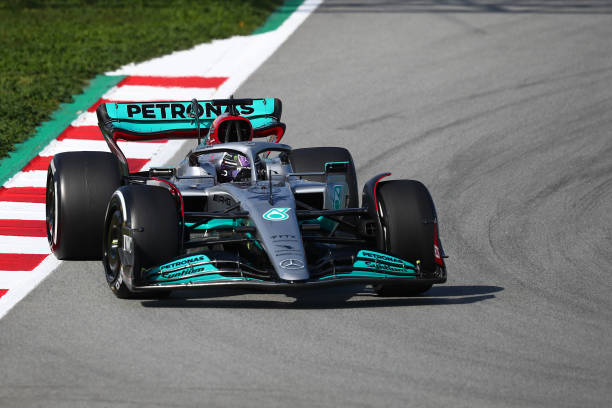 The first session of pre-season testing at the Circuit de Barcelona-Catalunya has officially finished.

This week the drivers took to the track in their new 2022 cars for their first lot of pre-season testing. The testing took place across three days with a different fastest driver each day.

Read below for a short round-up of each day.

Wednesday was the first day that the cars had a proper run on track. All but one of the team’s 2022 liveries were seen as Alfa Romeo is the only team yet to launch – their launch is happening on Sunday 27th February.

The morning session was promising for Ferrari as Charles Leclerc topped the timesheet with a lap of 1m 20.165s. The Monegasque drove for nearly 80 laps and beat McLaren rival Lando Norris by three-tenths.

Norris ended up P2 during the morning while Mercedes newest driver George Russell was bumped to P3 on 75 laps.

Whilst the Twitch trio held the top three places, the afternoon session had yet to take place. Six teams swapped their drivers after lunch with Carlos Sainz taking over from Leclerc, Hamilton for Russell, Stroll for Vettel, Albon for Williams, Bottas for Alfa Romeo and Schumacher for Haas.

Norris was kept out in the McLaren for the whole day, which saw him tally up just over 100 laps on the circuit. The MCL36 proved to be the quickest car on track that day as the Brit raced past Leclerc’s time as took to the top. Norris’ lap-time was 1m 19.568s.

This time by Norris saw a shift in the classification of the drivers with some from the morning session being bumped down. 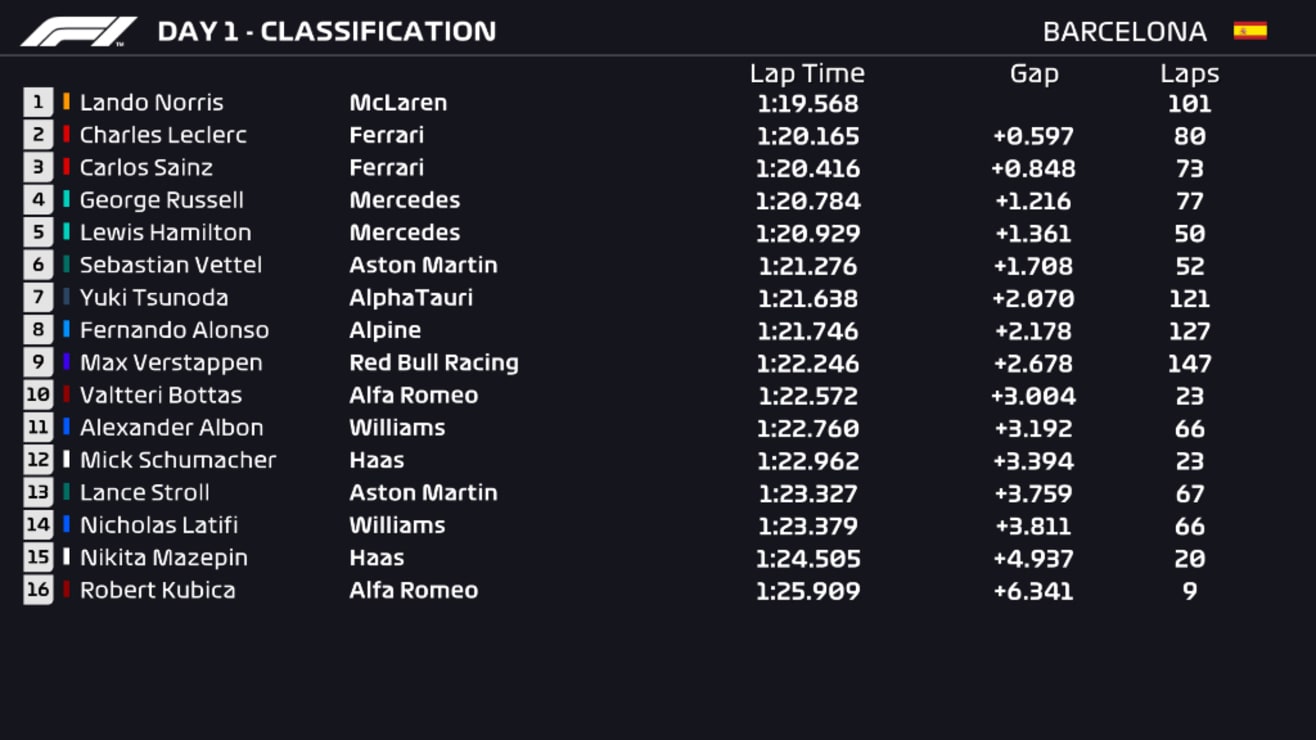 Day two saw some new drivers take to the track.

For the papaya team, it was Daniel Ricciardo’s turn to drive the MCL36. The Aussie set the fastest time during the morning session of the second day with more than 60 laps. His time was 1m 20.355s beating former McLaren driver Carlos Sainz by two-tenths of a second.

However, Sergio Perez, who had taken over from Max Verstappen for day two, halted the session as his Red Bull stopped on track, prompting a red flag.

Perez’s Red Bull came to a stop at Turn 13. The red flag suspended the session 30 minutes before lunch, but was lifted within 15. Unfortunately, Perez did not return to complete the morning session.

Whilst Ricciardo’s morning time was quick, it was not quick enough to be fastest of the day. Ferrari rival Leclerc topped the timesheets for the second day with a time of 1m 19.689s.

Alpha Tauri’s Pierre Gasly then took P2, knocking Ricciardo down to P3, as the Frenchman completed 147 laps with a time of 1m 19.918s.

Thursday was another good day for Ferrari as Sainz rounded off the top five coming in behind Russell, who was in P4. 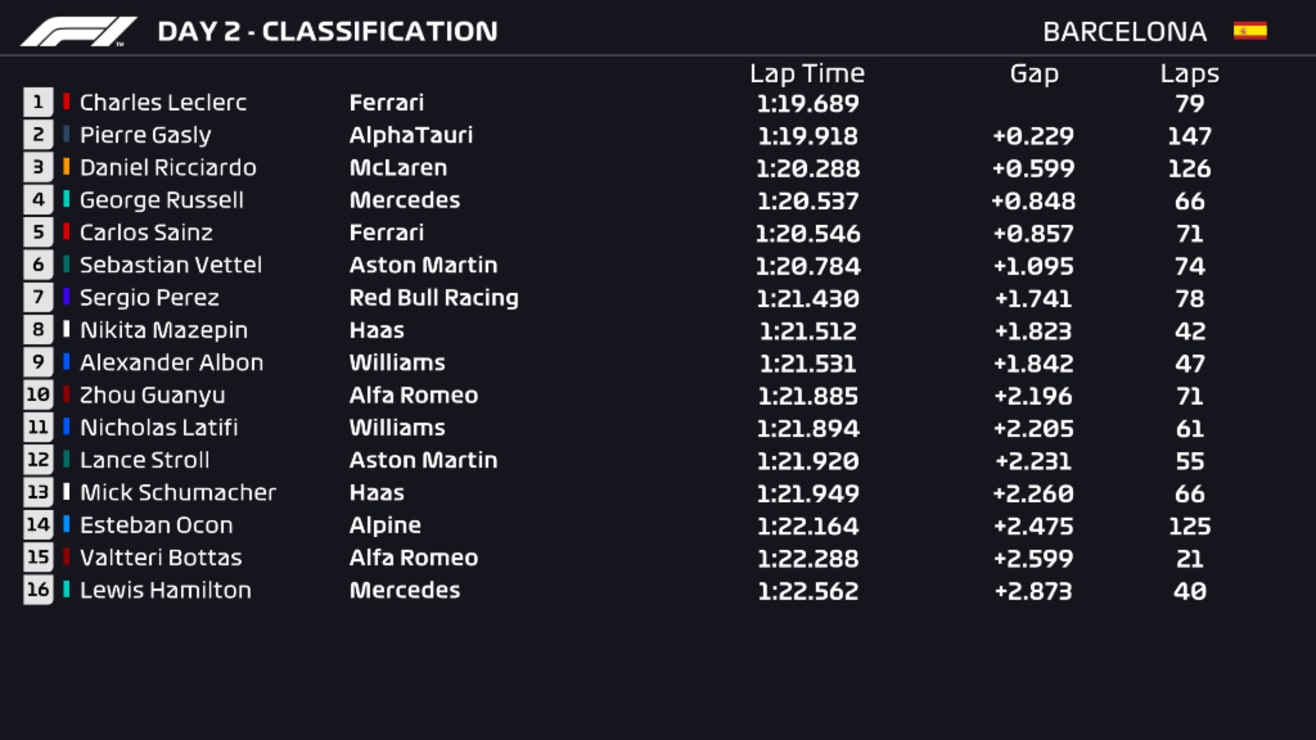 The third and final day of pre-season testing in Barcelona saw yet another fastest driver.

Hamilton’s lap time that saw three purple sectors was 1m 19.138s. Russell was quickest in the morning session but Hamilton just peaked above his teammate.

During day three, there were five red flags.

Fernando Alonso’s A522 was the first cause as smoke poured out, prompting an early end to the French outfit’s pre-season testing in Spain.

Following on from that, Gasly crashed his AlphaTauri and Alfa Romeo rookie Guanyu Zhou had a couple of stoppages. Then Aston Martin suffered problems as Sebastian Vettel’s AMR22 had an oil leak, which caused a fire.

Due to these reliability issues, the afternoon session saw the four teams (Alpine, AlphaTauri, Haas and Aston Martin) absent.

Day three ended with a Mercedes 1-2 as Russell finished P2 ahead of Perez in P3. With the Mexican’s jump to third, Verstappen was down to fourth.

Ferrari finished sixth and seventh with Leclerc ahead of his teammate. Albon just beat fellow Williams driver Nicholas Latifi, which meant Williams were eighth and ninth. Ricciardo rounded off the top 10 ahead of Norris.

Pre-season testing in Bahrain will take place in a couple of weeks on March 10th – March 12th. These sessions will be available to spectators so fans can see team’s progress.