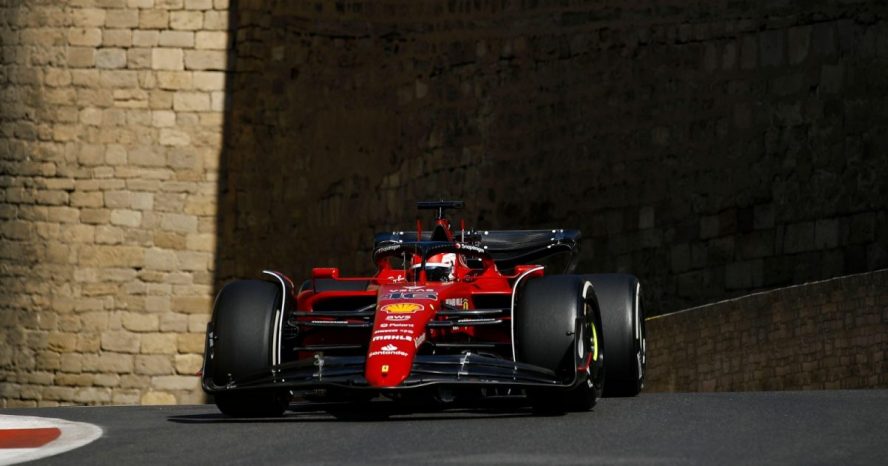 Charles Leclerc topped the FP2 session as both Red Bulls followed, amid frustrations over the Ferrari power loss. Meanwhile, Fernando Alonso shook the paddock with his fast Alpine and a fourth-place finish.

The track temperature decreased by 13 degrees in Baku since the first practice session. The sun was also setting and that meant that while most areas were shady, the drivers were finding themselves with the sun in their eyes at times. The dilemma is does a driver were a visor or not? The problem is that the shady areas are too dark and the drivers would not be able to see with a visor on.

The Scuderia came out stronger in FP2, as they used a lower downforce wing. Charles Leclerc was going a flying lap, with record sector but backed out as he locked up in turn 16. The Ferraris were faster in this session despite the porpoising.

As they look to battle Red Bull once again, the Scuderia are looking strong and equal competitors. This track favours them with the 90-degree corners which they are very strong in. Red Bull however will not back out, especially with their main straight strength.

Charles Leclerc had some trouble with the car at the end of the session, as he started slowing down from turn 13. Sergio Perez and Carlos Sainz flew past him while Leclerc had a loss of power. He sounded frustrated to the engineers, asking them whether there were any issues left.

His engineer told him that he could push and needed to go Mode Race.

Carlos Sainz then went off the track at Turn 15, but both cars made it to the finish line.

The FIA had been looking into Red Bull’s rear wing before other teams took note of it. In FP1, the top plane of the rear win was flapping rapidly as Max Verstappen enabled his DRS while going down the main straight between turn 20 and one.

For FP2, Red Bull chose to go with a different rear wing as they await the conclusion from the FIA’s investigation.

Alpine are dark horses in Baku

The French team arrived in Baku with several changes just like other teams. But the Alpine’s upgrades might be threatening to other teams, as shown in the practice sessions. They do not only have a new sidepod design, which saw them get bigger and a more squarish page from the rectangular one, but they are also testing out a new configuration system.

Thye have a very narrow rear wing too, which some might complain would be a disadvantage for the team, but it’s proving to help the car in Baku. Having a small rear wing in a windy track like Baky might help the cars to go faster because they have less of a battle against the wind’s elements, which will give fewer challenges to the car on the straights.

Fernando Alonso shook the paddock with a late-minute finish in fifth and stunned once again in FP2.

Banging the walls of Baku

Williams’ Alex Albon weirdly hit his front right with the wall, in an area of the track where it’s not normal for drivers to make mistakes. The Thai made a switch change and as he looked down at the steering wheel, he crashed. The engineers were left having to work on his front suspension, to make sure that it is all in order.

Meanwhile, Mick Schumacher had something flapping over the right side of his headset. The Haas needed “more tape” following a small collision that the German also had with the wall. The pressure is on for the 23-year-old who wants to honour his father’s legacy and have his name written on the Formula One history books too.