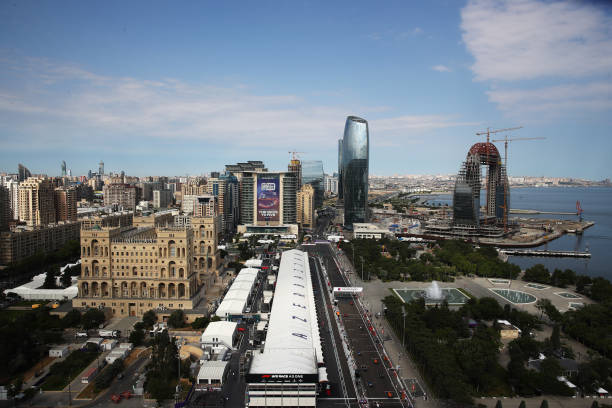 BAKU, AZERBAIJAN - JUNE 06: A general view over the track at the start of the race during the F1 Grand Prix of Azerbaijan at Baku City Circuit on June 06, 2021 in Baku, Azerbaijan. (Photo by Joe Portlock - Formula 1/Formula 1 via Getty Images)

The FIA asked the street circuit to make some changes ahead of the 2022 race.

Ahead of the 2022 Azerbaijan Grand Prix, changes are reportedly being made to the pitlane entry of the Baku City Circuit to increase safety.

Race promoter Arif Rahimov has said that no changes are being made to the circuit itself, just the layout of the pit entry.

The Baku City Circuit has long been regarded as one of the more perilous tracks on the calendar. Specific concerns raised in the past namely include the configuration of the pit entry.

Last year’s race at Baku included several incidents down the start-finish straight that called the layout into question. Both Max Verstappen and Lance Stroll suffered tyre failures that could have been much worse had they happened a little closer to the tight pitlane entrance.

Ahead of the 2021 Azerbaijan GP, former F1 Champion Nico Rosberg commented on the dangerous layout of the pit entry, calling it “the most dangerous [place] of the whole year.”

At the time, Race Director Michael Masi denied Rosberg’s claims that the circuit was dangerous in any way. He addressed the safety concerns by saying “The pit entry and the entire circuit has been designed, and is homologated by the FIA as a Grade 1 circuit, and fulfils all of the various safety requirements that the FIA has within its regulation requirements.”

But now they are making changes to the layout, according to the promoter for the Azerbaijan GP, Arif Rahimov.

“There are no changes to the track itself,” he said. “But we’ve been requested by the FIA to slightly modify the pitlane entrance so it’s a little bit safer.”

Rahimov also mentioned that modifications could be made to the kerbs throughout the race weekend. With a new generation of cars hitting the track for the first time next month, they’ll be keeping an eye on how they are impacted by the kerbs. Should changes be requested by drivers or teams, the track can implement them as problems arise.

On The Pressure From New Street Circuits

New street circuits are popping up on the calendar like Jeddah, Miami, and Las Vegas. So races like Baku are becoming more common.

On these new circuits, Rahimov has stated he has no concern for the future of the Azerbaijan GP. The race made its debut on the F1 calendar in 2016, and currently has a contract till 2024.

“We don’t feel any pressure because we have no competition with other races in our region. If you have three Grands Prix in one country, like the USA, or four countries in the Middle East vying for a place then that’s where you’ll more likely see pressure in hosting.”

But despite not citing any concerns, Rahimov has mentioned being keen to host a Sprint Race in 2023.

“With how busy F1 is right now, I think the best time to get their attention into the novelties is when they’re here actually racing,” he said. Hosting a Sprint Race would be one way to draw attention to the circuit amidst buzz surrounding other, newer street circuits.