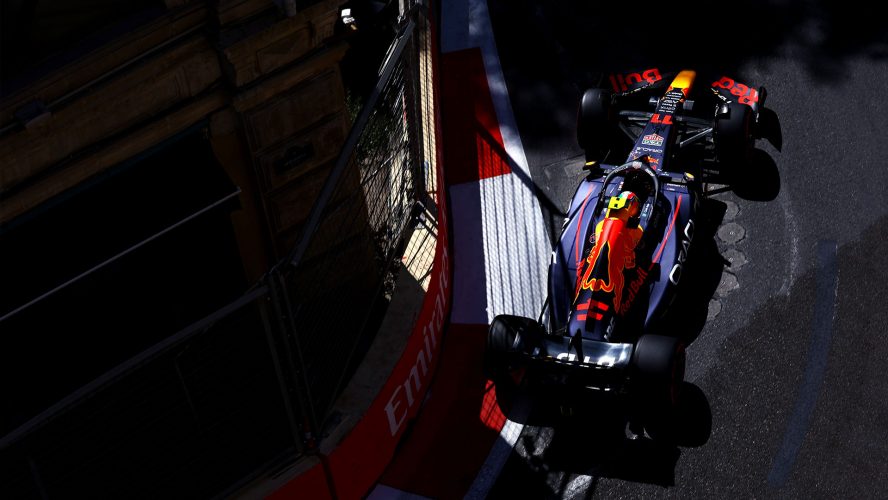 Sergio Perez strikes again in Baku to top the timings as Charles Leclerc was seven hundreths of a second slower in his Ferrari.

Max Verstappen had his flying lap ruined by the Alpine and the traffic ahead as he finished in third while Carlos Sainz managed to finish in fourth.

The wind died down today as temperatures were warmer in Baku. FP3 was delayed following a chaotic Formula Two sprint race. Lance Stroll kicked off the session at quarter past three. The regulations state that there has to be a two-hour gap between the third practice session and qualifying. That is why the Saturday qualifying session will start 15 minutes late.

One of the barriers had to be fixed following the crash from the F2 sprint race, but there was still a good amount of debris and dust left.

Ferrari are also suffering from porpoising, not as bad as Mercedes but they are. Carlos Sainz was mainly affected by it but it doesn’t bother Charles Leclerc as much. Despite the problem, both drivers were alternating between first and second place, recording the fastest laps out of all teams.

Both cars were running on soft compound tyres, in preparation for qualifying.

Red Bull took their time to get out on track, following two successful sessions from yesterday. The team prepared for a good performance for qualifying, although Baku is a track in which drivers have more opportunities to overtake, so a pole will not guarantee a win.

Many other teams followed such as competitors Ferrari, who went out with 46 minutes left on the clock. At 50 minutes, Mercedes’ George Russell and Mick Schumacher in the Haas were the only drivers out on track. The German hoped to get more track time following two stressful sessions yesterday. He first had problems with the water pressure in the car during the first practice and then had a slight collision with the wall during FP2.

During his first run, George Russell told his team that the bottoming was way better than yesterday. Mercedes thought that they were on top of the porpoising issue but coming to Baku they found that it remains a persisting problem. At 40 minutes, George managed to match Ferrari’s speed in sector one, second an overall record time but failed to do so on the rest of the track.

Lewis Hamilton was recording better times today but the porpoising is still the main factor in his car. His head was seen unstable bouncing which surely affected his performance. He also complained to his team that he had no rear during the session.

With 16 minutes left on the clock, George Russell also had the same comments to make regarding the rear. He was shocked by the lack of rear his car had as he was in fifth in the timings, behind both Ferraris and both Red Bulls while his teammate Lewis was in tenth, behind Gasly, both Haas and Bottas’ Alfa Romeo.

There were five and a half minutes to go when Lewis complained about whether his team turned the engine down. He was told that they do not have enough milage and so had to take such actions.

We all expected more from Pierre Gasly. The French has brought in results like no other for AlphaTauri and went on to reach fourth in the timings, being only a second and a tenth slower than the Ferrari – which was on soft tyres – while driving on hard compound tyres.

Alfa Romeo and Haas left it till today to bring out their new upgrades to Baku, in time to face off in qualifying. The Italian side showed off a new floor while Haas brought out a new wing.

With a new very shallow rear wing, Alpine were also working on the rear suspension during the FP3. The French side will need to be careful with Fernando Alonso’s upgrades when they relate to engine works. As shown by Sky, the Spaniard already picked up several penalties and we are only seven races in from 22. The two-time World Champion also seemed to be slower following the adjustments made today as he was 1.7 seconds off the pace, but recorded the fastest last sector.

McLaren made a few adjustments to Daniel Ricciardo’s car and proved to be successful. With seven minutes left, the Aussie was placed sixth in the timings.