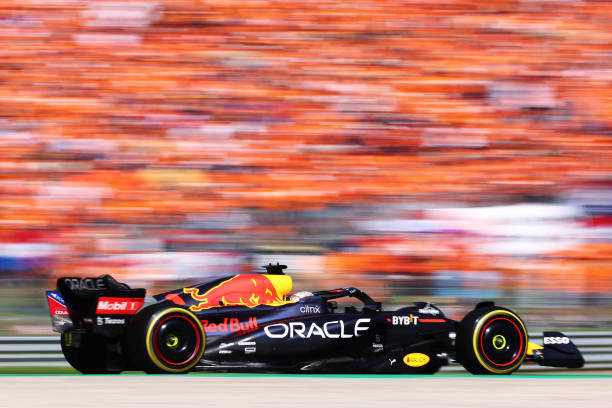 The second Sprint Race of the season is complete.

The second Sprint Race of the season is complete as Max Verstappen wins the first race of the Austrian Grand Prix weekend.

As the cars lined up on the grid, all eyes were on the top three teams. It’s Red Bull’s home race here in the Austrian Alps and with Max Verstappen in pole position, the question was whether he could win. Ferrari proved to be strong in the second free practice session of the weekend, with Carlos Sainz and Charles Leclerc placing 1st and 2nd respectively.

The session instantly had drama as Fernando Alonso remained stationary on the grid at the beginning of the formation lap. His Alpine had the tyre blankets still on and the team had him still on the jacks. An electrical problem was the cause of this as Alpine had to step away from solving the issue when the lights went out.

The Spaniard was starting eighth but now this leaves a gap open for Lewis Hamilton and Pierre Gasly. Alpine worked on his car in the pits and it was looking like he would not even start the Sprint.

Zhou Guanyu also had an issue on the formation lap as his engine turned off. This prompted the red and green lights, signalling another formation lap. However, Zhou managed to get the Alfa Romeo starting.

This, as a result, meant that the Sprint Race would be a lap shorter.

The lights went out and Max Verstappen got a good start, managing to maintain the lead of the race. Both Ferrari’s battled each other, briefly switching place but by the end of the first lap, Charles Leclerc was in P2.

Going into Turn 1, Pierre Gasly spun after some contact with Lewis Hamilton as the seven-time world champion got sandwiched in between Alex Albon and Gasly. Both Gasly and Hamilton, thankfully, managed to continue. This was Gasly’s third first-lap incident in the last four sprint races.

Sergio Perez, who received a penalty from Qualifying and started in P13, had some good opening laps as he moved up places to P8. Alex Albon, who was on the soft tyres, quickly got overtaken by Hamilton who dived ahead, despite being on the mediums.

Both Aston Martins and McLarens, whose Qualifying was not as good as either team hoped, moved up quite a few places. Lando Norris and Daniel Ricciardo moved up three places each, whilst Sebastian Vettel moved up six and Lance Stroll moved up two.

Albon and Norris kept switching places, but eventually Norris stayed ahead. A five-second time penalty was given to Albon for forcing Norris off the track.

The focus moved to the front of the grid as Leclerc tried closing the gap to Verstappen in order to get into the DRS zone. However, it was Sainz who was putting on the moves as he attempted to get past the Monegasque.

On Lap 7, the two prancing horses battled once more as Sainz steamed down the inside of Turn 3. Sainz’s radio was played as we heard him say, “I thought the fight was up front.”

Perez was sat behind Schumacher who was sat behind Magnussen. The German went to overtake his teammate, but that opened the door allowing Perez to take advantage of the move and get past.

On the following laps, the Mexican then got past Magnussen, and started to chase Esteban Ocon. The Red Bull proved its pace as Verstappen was extending his lead to two and a half seconds and Perez got ahead of Ocon.

On Lap 11, a yellow flags were waved. Sebastian Vettel ended up in the gravel in Sector 2 after contact with Albon, who understeered into the side of the Aston Martin.

He managed to reverse out of the gravel trap, but it did mean Vettel was then in P19, running last. He was going for P13 so the German’s race was not going how he planned, especially after qualifying 20th.

George Russell, who suffered a crash much like Hamilton in Qualifying, was having a pretty lonely race for about 17 laps. He was running in fourth with Perez trying to close the gap behind him.

With Hamilton in ninth, he needed to get past both Haas’s. The issue here was that Schumacher was within DRS of Magnussen, making it harder for Hamilton to get past.

Five laps to go and Hamilton was still in ninth, not having gained any positions in the race so far. It looked like caution was Hamilton’s focus as he tried overtaking.

Out of Turn 3, Hamilton and Schumacher had a very close call. Unfortunately, whilst he was chasing Schumacher, Valtteri Bottas has caught up to his former teammate on his most successful track.

On Lap 21, Magnussen had pulled away ending the team game, which prompted Schumacher to ask for his teammate to slow down. But, on this occasion, Hamilton got past of the young Haas driver with DRS.

Going into the final lap, Verstappen was still leading. The orange army could be heard from the grandstand as Verstappen crossed the finish line. It was a race victory for the home hero.

Vettel was asked to box by his engineer, meaning he starts the Grand Prix tomorrow in a similar position to today’s race.