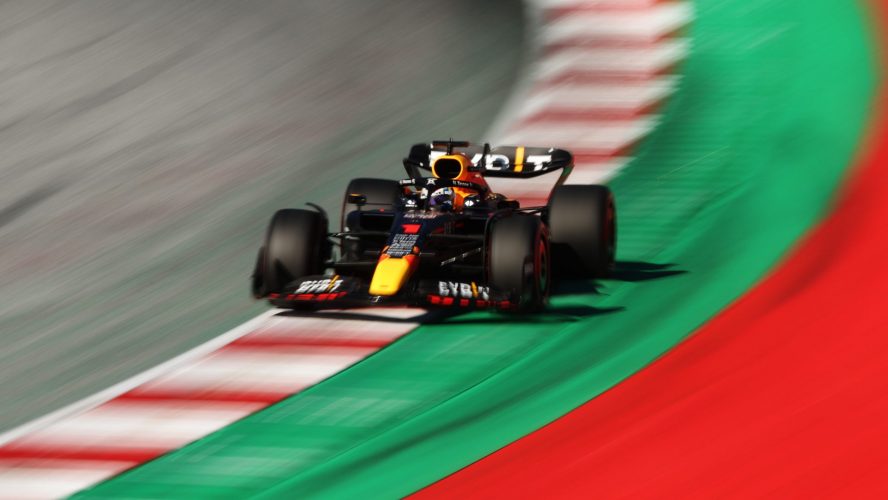 SPIELBERG, AUSTRIA - JULY 08: Max Verstappen of the Netherlands driving the (1) Oracle Red Bull Racing RB18 on track during qualifying ahead of the F1 Grand Prix of Austria at Red Bull Ring on July 08, 2022 in Spielberg, Austria. (Photo by Adam Pretty - Formula 1/Formula 1 via Getty Images)

Red Bull driver Max Verstappen snatched poll position from Ferrari driver Charles Leclerc on the final lap of qualifying at the Red Bull Ring in Austria ahead of the sprint race tomorrow for the Austrian Grand Prix.

The Dutchman posted a 1:04:984 after Mercedes caused two red flags which saw little time for Verstappen to lead Leclerc and Sainz by 0.029 and 0.082 seconds.

Mercedes engineers have a long night ahead of them after their drivers Lewis Hamilton and George Russell both brought out separate red flags in Q3 after slamming their cars into the walls of the Red Bull Ring.

The Silver Arrows will be extremely disappointed with the qualifying results as they looked quick enough to challenge for a spot in the top three.

Russell and his teammate will start from ninth and tenth in tomorrow’s sprint race.

After his first points finish, Mick Schumacher reached Q3 yet again this season after posting a 1:06.151, continuing to skyrocket the young German’s confidence. The son of Michael Schumacher finished the session P8 , closely behind his teammate Kevin Magnussen.

Pierre Gasly and Yuki Tsunoda scraped their ways out of Q1 however they failed to procede through Q2. Gasly narrowly missed out on Q3, finishing P11 whilst Tsunoda finished P14.

Daniel Ricciardo had his worst qualifying in the Austrian Alps since 2015 as he narrowly failed to make it out of Q1 yet again this season, 1. behind his teammate Lando Norris.

Whilst Norris managed to make it into Q2, he could only go 15th fastest, knocking him out of the session as he complained on the team radio about being scared of “hitting the brakes”.

Sebastian Vettel and Lance Stroll failed to advance from Q1 for the second week in a row as the team in green struggled around the Red Bull Ring.

Four-time World Champion Sebastian Vettel will start at the back of the grid for the sprint race on Saturday as his quickest lap was deleted, putting him plum last.

Williams driver Nicolas Latifi was unable to replicate his Silverstone qualifying magic as he was knocked out in the first qualifying session in Austria. The Canadian will start ahead of Sebastian Vettel in P18 tomorrow.

The drivers will be looking forward to their opportunities to move forward in the first sprint race of the season tomorrow.