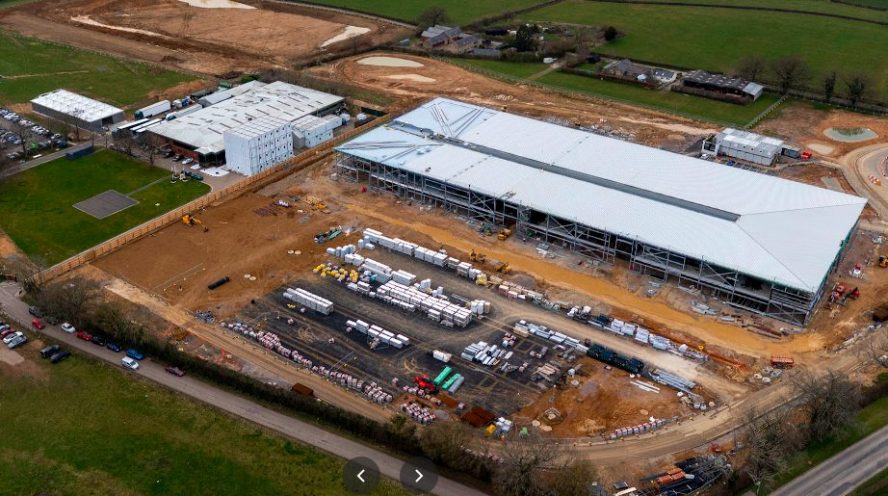 Aston Martin are fast approaching the finish date for their new headquarters, dubbed as: “the best factory in Formula One.”

Aston Martin will be hoping to move into their new factory for the beginning of next season. Guy Austin, the project manager told Aston Martin:

“We started on site last august and we’re due to finish towards the end of January in 2023.”

The team has reportedly spent over $267 million on the project and the 400,000 square foot facility is set to be state of the art.

“The building overall is about 160 meters by 50 meters footprint and will house all the things that a Formula One team needs to do to design and build the cars – all under one roof.”

Aston Martin have chosen to keep their factory close to the Silverstone circuit. They will be the first factory to be fully dedicated to Formula One purposes. Austin stressed the importance of their Formula One staff’s involvement for the project:

“We need massive inputs from all the heads of departments.”

The new facility has also been recently fitted with a time capsule, dedicated to Aston Martin fans. This was a joint venture between Aston Martin and JCB, who have a close business relationship. Jed Branbreth, a degree apprentice at JCB told Aston Martin:

“The partnership between JCB and Aston Martin F1, from JCB’s perspective, is just incredible.”

The time capsule will be closed for 50 years. The contents inside the capsule are mainly unknown but they have confirmed that there is a lot of fan articles and memorabilia inside. Mike Krack, the Aston Martin team principal stressed the importance of the fans by saying:

“At the end of the day, we do this for the fans, and we hope that we can keep them with us and have successful moments for them.”

The team will be looking for a huge change with their new factory. It could help them create a competitive car that could reach levels that the team have never been able to achieve previously. In 50 years, Aston Martin may have become a great team. The time capsule will be a sure reminder of where they came from.

Aston Martin find themselves in ninth place in the Constructors standings, above Williams. With Fernando Alonso joining the team for the 2023 season, following Sebastian Vettel’s retirement, the team will be hoping that they can improve results.

They have been well of their usual pace this season and they have struggled to make their way out of Q3 on occasions. Even with a former world champion, Sebastian Vettel, the team has a serious lack of pace.

Now that a brand-new factory is being built for the team, they can look to drastically improve the car. The facility has been well thought out and planned to perfection as Austin stated:

“The building has been in design and design Development for something like two years now and actually we finally got to the point where the design was where Lawrence wanted it.”

Most Fans will certainly be looking forward to seeing what the new facility can produce, and with Fernando Alonso at the wheel – the future looks promising.