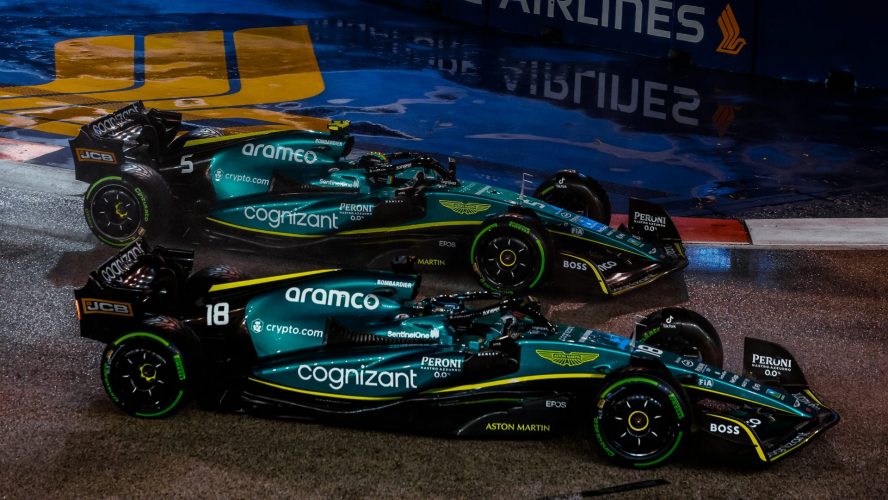 Aston Martin celebrated their best finish this season in Singapore after Lance Stroll finished in sixth and Sebastian Vettel followed in eighth.

This was the second time that Aston Martin managed to score double points at a Grand Prix, however, this was their best points haul. They also finished ahead of their main competitors, Haas and AlphaTauri after they started in P11 and P13 on the grid following qualifying.

Many things have been going wrong for Aston Martin this season, but it seemed that at Singapore, the F1 gods were in their favour. Sebastian Vettel was competing with Max Verstappen throughout the Grand Prix. The Dutch was looking to secure his second world title over the weekend, but a a slight mishap with fuel on Saturday saw him start in P8 on the grid on Sunday.

Lewis Hamilton was another driver battling it out against Vettel throughout the Grand Prix. On the other hand, Lance Stroll had the McLarens to worry about too. Singapore is a difficult street circuit to overtake in with many straights that would have favoured the likes of Red Bull. However, the Canadian was determined to give his Aston Martin a decent finish as we head into the last five races of the season.

Comments from the Aston Martin drivers

The four-time World Champion had to battle it out with Hamilton and Verstappen throughout the Grand Prix. He finished in P8 to take home four points. The German spoke about battling it out with the better cars on track and about the race overall.

Vettel said, as reported by Formula 1: “I knew I had to be aggressive at the start. So after the initial bit of patience across the line, I knew I had to push, which I did. I was checking out some lines on the lap to the grid and it worked, so happy with that. And after that, I think we got a bit unlucky; I would have liked to stay out longer – we’ll have a look – but I think it wasn’t great that the Safety Car just came out, which just then banked the positions.

“They are much faster. I can see in the mirrors they were following with ease, so I was obviously a little bit stuck with Lance at times and it didn’t help that my rear tyres were not so fresh at the end. I had a bit of a wobble in the last lap exiting Turn 5, I knew it had to be spot on; it wasn’t quite spot on, so Max had a decent run down and they have a very strong top speed with their… car so it was difficult. I tried, but it was close.”

Lance Stroll was delighted with his P6 finish which gave the team eight points.

“We’ve got like a lot of P10s this year, you know, we’ve had chances for big results, but for whatever reason things happened, never really scored, and today things just went our wayIt was a tough one, so happy to pick up a bunch of points, that’s for sure.”