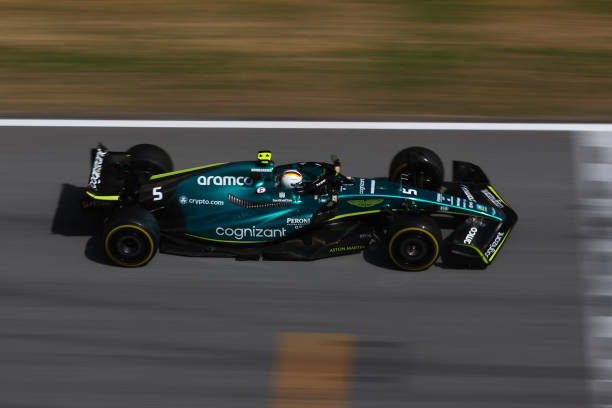 BARCELONA, SPAIN - MAY 22: Sebastian Vettel of Germany driving the (5) Aston Martin AMR22 Mercedes on track during the F1 Grand Prix of Spain at Circuit de Barcelona-Catalunya on May 22, 2022 in Barcelona, Spain. (Photo by Lars Baron/Getty Images)

After the drama in Spain, Aston Martin have revealed why they made two cars.

Aston Martin have revealed their reasoning behind their two-car approach that saw them race a B-spec car at the Spanish Grand Prix.

Last weekend in Barcelona at the Spanish Grand Prix, Aston Martin unveiled the new AMR22 after considerable upgrades. The car looked very different to what fans have seen in previous races this season. These differences caused a stir as it was noticed that the B-spec AMR22 looked suspiciously similar to Red Bull’s current RB18.

This speculation echoes that of two years ago when Racing Point, now Aston Martin, had the “copy gate” drama. Back then, the focus was on potential borrowing of car parts, like a power unit and gearbox. However, now the accusations concern the passing of information between teams.

In the last few months, personnel have made the move from Red Bull to Aston Martin. This is where the accusations lie as it has been suggested that these team members have taken information with them.

An investigation by the FIA has been conducted into the new AMR22. The results determined that Aston Martin did nothing wrong and that it was fair if any information had been brought in personnel’s heads.

The AMR22 was dubbed the ‘Green Bull’ over the weekend, but Aston Martin have since revealed their decisions behind creating this B-spec car. The team’s Chief Technical Officer, Andrew Green, has explained their decision.

Green highlighted that the B-spec car’s design was not a recent thing. It has been in the works for a long time, before the RB18 was launched. He said that in August last year, the team “had two projects running together for seven or eight months.” These two projects had “different traits”, so at the time, they “couldn’t tell which one was going to end up being best.”

Designs of the two cars

Commenting on the new spec car, Green said had a “different characteristic, but it didn’t look like it was generating a lot of downforce.” However, the previous car, which we saw at the first five races, has a “huge amount of downforce” but “quite poor characteristics.”

These aspects played a part in Aston Martin’s decision to change up the car in Spain. Green said that the team were “greedy” at the beginning. So, they went with the car “generating the downforce.” Their aim was to “sort out the characteristic further down the line.”

When questioned about how the two designs fit in the budget cap, Green said:

“What we did was make sure the chassis contained the two concepts. So the chassis was designed to be able to take the old cooling system and this cooling system without modification. That was a big thing – so chassis, there was no additional cost.”

The aim for the A-spec car was to get the team to race five and “do no more than that.” Despite having the “parallel two projects”, they “didn’t run them both together all the time”. Green said they that when they realised the A-spec car was “tailing off”, they “started developing the B-spec.”

Christian Horner suggested that either information has been passed across to Aston Martin when employees left Red Bull. The Milton Keyes team have since launched its own investigation of sorts, looking into digital trails within the team’s system.

Green commented on Red Bull’s RB18 and the influence it had on the B-spec AMR22. He said “when Red Bull launched in February time, it reinforced the route that we were going down.” He noted that the “majority” of the B-spec was developed by Aston Martin themselves.

This he feels was “quite clearly” demonstrated to the FIA during their “deep dive”. Green said they were able to prove “it was just all generated internally”, but “obviously” you would take inspiration from others.

Green confirmed that there is inspiration from the RB18, but “there’s a lot of detail” that is “completely different.” For example, “the whole front wing concept, the front suspension, the chassis”. The power unit is also different as Mercedes is their engine supplier. Other differences include the “cooling system, gearbox, rear suspension, rear brake ducts, rear wing, rear beam wing”.

The car takes inspiration from Red Bull’s RB18, but it has been in the works for a while. Aston Martin’s B-spec car “is different” and the “drivers felt the difference” in Spain.

Green said the team still have work to do and still need to “find out where the sweet spot is.” But for the Silverstone team, this new car “does feel as though it’s at the beginning of its journey.”

The Spanish Grand Prix was an okay weekend for Aston Martin. Saturday’s Qualifying was disappointing for both drivers as they were out in Q1.

However, their performances during the race did show improvement from some previous races, particularly for Sebastian Vettel. The German qualified 16th but finished the race just outside the points in 11th. This is his second highest finish of the season.

Lance Stroll, unfortunately, wasn’t as lucky after suffering an incident with Pierre Gasly. The Canadian qualified 18th and finished the race in 15th, his lowest race result of the season so far.

With Monaco this weekend, it’ll be interesting to see how the AMR22 performs on the streets of Monte Carlo.