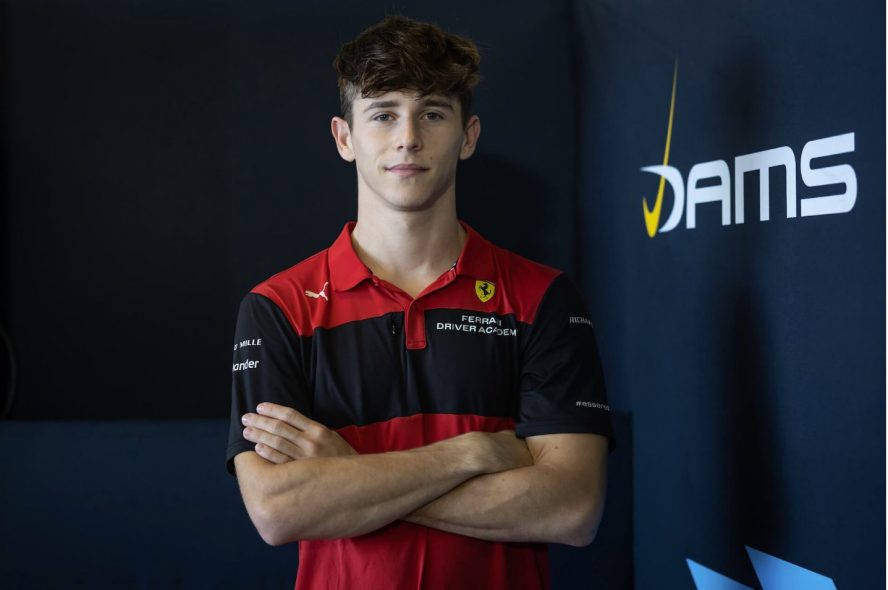 Arthur Leclerc is moving up to the Formula 2 Championship for 2023 with DAMS.

2022 marks the final season of Arthur Leclerc racing in the FIA Formula 3 Championship. The Ferrari Driver Academy member has raced in Formula 3 for the previous two years. But now, he will be taking the step up into Formula 2.

During his Formula 3 career, Leclerc has raced for PREMA Racing. However, when he begins his Formula 2 campaign, the Monegasque will race for DAMS. The French team this season had Roy Nissany and F2 rookie Ayumu Iwasa as their driver line-up.

For 2023, DAMS will retain Iwasa and the Japanese driver will partner Leclerc. As well as joining DAMS as a full-time driver for 2023, Leclerc will take part in the F2 post-season test with the team.

Leclerc’s comments on moving up

Following the announcement, Leclerc has said:

“I’m delighted to be making the step up to Formula 2 with DAMS in 2023. They’re a very successful team that has achieved great results in the championship, and I hope I can be a part of that and continue the team’s success.”

The 22-year-old continued praising Charles Pic, the Team Owner, for his “amazing job to help the team back to winning ways throughout the season.” Leclerc also said he’s “aiming to keep that going” in 2023.

He admits that they have “a lot of work to do before the start of the new campaign in Bahrain in March”. But he is “really looking forward to getting started in the post-season test in Abu Dhabi!”

Pic of DAMS has said “it’s great to have Arthur join DAMS for 2023.” He said that as a team, they’ve seen Leclerc’s “talent and skill throughout his career so far, and he’s shown in the last two years in F3 that he’s capable of challenging for victories.”

The Team Owner added that DAMS is “aiming for a strong campaign in 2023, and [they’ve] no doubt that the addition of Arthur will help [them] towards [their] goals.”

This year Leclerc finished his final Formula 3 season in sixth in the Drivers’ Championship. He scored 114 points, just 25 less than the champion, Victor Martins.

He had a consistent year in seeing the chequered flag in all races, with his lowest race finish being in Hungary in the Sprint Race. However, Leclerc achieved a podium in Bahrain in the first Feature Race and also a race victory at Silverstone.

The post-season tests in Abu Dhabi are taking place this week on November 23rd to November 25th.