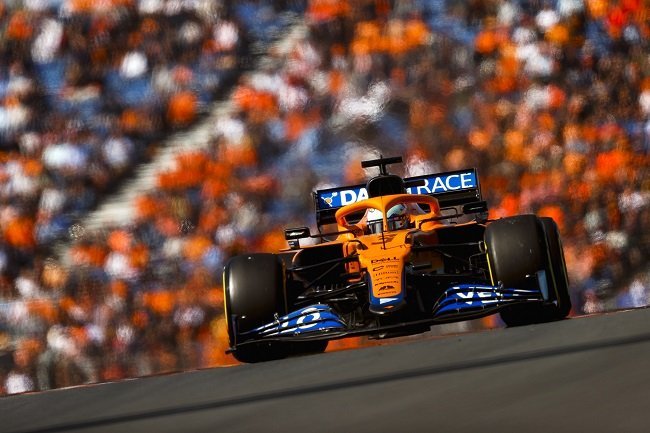 “Anything can happen” as McLaren remains optimistic for Sunday

Despite only one of the papaya cars making it into Q3 at Zandvoort today, in the form of Daniel Ricciardo, the Woking based team remains optimistic for Sunday’s race.

The drivers enjoy the track, as Formula 1 returns to the Dutch coast for the first time in 36 years. Daniel Ricciardo is excited about the race. “So far I’ve had a hoot”. The Australian qualified P10 for the Dutch GP. It’s not his best result, but it’s one of the rare occasions this season where he outqualified his team mate Lando Norris. “We’re still trying to understand the data”, as he lost quite a bit of time in Q3 compared to Q2. Ricciardo continued, “I wouldn’t say it was a mistake-heavy lap. I just lost a lot of grip.”
Norris will start the Dutch GP from P13, and admitted he could’ve improved but wasn’t sure if that would have been enough to get into Q3. “Daniel did a good job today. And a lot of cars have done a massive step today.”

The team remains optimistic for a good race result. Overtaking will be tricky, as the support races have shown, and a lot can happen. Andreas Seidel states that the team will spend the evening analysing all the data and do the best preparation they can for the next day. A challenge for the teams is the very tight pit Lane in Zandvoort. “It’s the tightest pit Lane we have”, but Seidel is certain the crew and drivers are prepared as much as they can be. “If everyone comes in at the same time, you’re going to have some moments. But if you stay calm, the group around you will stay calm.”, Daniel Ricciardo adds.

Expectations are hopeful, but realistic. Norris shares his thoughts: “Zandvoort is not a place you wanna be anywhere but in the front of the grid. The aim is to get into the points. It’s not going to be easy, it’s difficult to overtake, but you never know.”  Both Lando Norris and Daniel Ricciardo have had great start results so far this season, and e opening lap with be the best place to make up places at this circuit. “The exciting thing is, we haven’t had a race here so anything can happen.”, says Ricciardo. He adds that circuit conditions can easily change due to diet and gravel on track. “It’s also going to be a hard race physically, so maybe fatigue will play a part as well.”

“It is one of the coolest tracks though”, Lando Norris adds and Ricciardo agrees. “The track itself is great, but it bites big time. At the same time, it bites safely”, referring to a few heavy shunts we saw in qualifying, in the likes of Sainz’s Ferrari or Latifi’s Williams, and the track seems quite unforgiving for mistakes.

We look forward to seeing the action on track in Zandvoort tomorrow. Lights out at 2pm UK time.