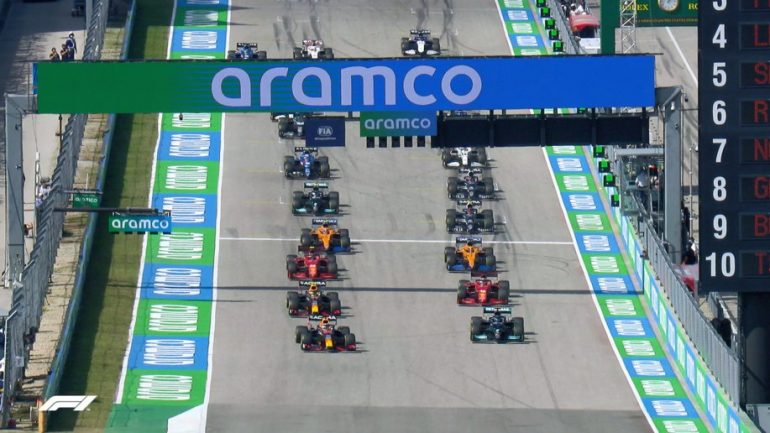 A Front-Row Battle Between The Title Contenders

Formula 1 returned to the Circuit of the Americas this weekend, after a two year gap in the lone star state where two stars were lighting it up, providing an epic battle on the Austin circuit.

With a Red Bull car on pole – the first time in the turbo-hybrid era that a Mercedes car has not been in P1 – the scorching heat of Texas, and a race weekend attendance of 400,000 people, an exciting race was certainly promised for viewers. Ahead of the race start, Gasly’s car suffered a power unit issue, but thankfully the engineers managed to get the car started so all 20 drivers could start the race.

Lights Out and Away We Go

The uphill sprint into turn 1 was quite a battle for the two title contenders. Verstappen pulled away on the outside line but his attempt at maintaining the lead was futile as Hamilton had a better start, pulling away quicker, and pushed Verstappen wide as he took the inside of turn 1, taking the lead. Nicholas Latifi and Lance Stroll made contact whilst the pack went into turn 1, causing them both to fall towards the back of the grid. Whilst the two title contenders battled for the lead, the McLarens fought with the Ferrari’s as Daniel Ricciardo and Lando Norris attempted to overtake Carlos Sainz; Ricciardo was successful, moving up to P5, whilst Norris ran wide and stayed behind his former teammate.

Further down the pack, the three drivers who took rear-of-the-grid penalties all managed to overtake and make their way up through the grid, with George Russell in P14, Sebastian Vettel in P15 and Fernando Alonso in P16.

As the race continued, Hamilton and the two Red Bulls began to break away from the other drivers, whilst Valtteri Bottas was stuck behind Pierre Gasly’s AlphaTauri. Lap 3 marked the beginning of pit-stops as Esteban Ocon came in to switch to hard tyres and to get a new front wing, due to damage from contact with an Alfa Romeo.

With more drivers pitting, Red Bull decided to box Verstappen on lap 11 to attempt an undercut on Hamilton. Sergio Perez pitted a couple of laps later, forcing Hamilton to follow, which ultimately led to Verstappen taking the lead when Hamilton exited the pits. Whilst Verstappen led the race, Red Bull’s sister team, AlphaTauri had to retire Gasly as the bumps and curbs of the circuit damaged his suspension. With Yuki Tsunoda being AlphaTauri’s only driver left in the race, he needed to get ahead of as many drivers as possible, but he was overtaken by Bottas.

In the middle of the pack, Alonso was battling with both Alfa Romeo drivers. On lap 20, Alonso raced side by side with Räikkönen, pushing him wide. On the following laps, Alonso had a battle with the other Alfa Romeo driver, Antonio Giovinazzi. Alonso overtook Giovinazzi, by running wide, but had to give the place back as it was an illegal manoeuvre. However, the reverse then happened as Giovinazzi ran wide and gained a position on Alonso, ultimately handing it back.

As the race continued and the midfield battled for points finishes, Verstappen committed to the two-stop strategy, boxing on lap 30 with a pit-stop of 2.8 seconds. Hamilton then led the race, taking care of his tyres to make his second pit-stop as late as possible. The lead then changed again as Hamilton changed his tyres on lap 37, coming out of the pits 7.8 seconds behind his rival. With the hot surface of the track, the two title contenders needed to take care of their tyres until the end of the race.

Hamilton continued his charge through the backmarkers to catch his rival, who was still following Tsunoda and Räikkönen, aided by the DRS he received from being behind Vettel on the back straight. Hamilton smashed the sector times, gaining fastest lap, as Ocon was told to retire due to an issue with the back of the car, on lap 42.

Ricciardo had his Texan mojo as he fought in between the two Ferrari’s in P5, whilst teammate Norris was stuck behind Bottas in P8. Sainz caught up to Ricciardo and they made contact on lap 43 as Sainz went the long way round on the outside of a corner, but Ricciardo remained ahead of the red Ferrari.

Heading into the final 10 laps, Verstappen was still leading the pack. The key to Verstappen maintaining his lead was making sure he had enough rear tyre left to keep up with Hamilton’s speed. As the race reached its peak, Sainz dropped back from Ricciardo, stretching the gap between his constructor’s rival, whilst his teammate Charles Leclerc continued with good pace in P4. With only 5 laps to go, Alonso had to retire from the race due to issues with the rear of the car, leaving no Alpine in the classified race result.

As the race neared its end, Verstappen pushed his tyres to the maximum as Hamilton struggled in the dirty air, extending the gap between the two rivals. Vettel made his way into the points as Räikkönen span into the gravel. The final lap saw a battle between Verstappen and Hamilton as the latter tried to close the gap between then, but it appeared futile as Verstappen received DRS from Schumacher.

Verstappen achieved his maiden win at COTA, extending his lead in the championship ahead of Hamilton to 12 points, who received an extra point for fastest lap. Verstappen was also voted F1 Driver of the Day and Red Bull got their 200th podium.

Formula 1 heads to Mexico in two weeks for the 18th round of the 2021 season.