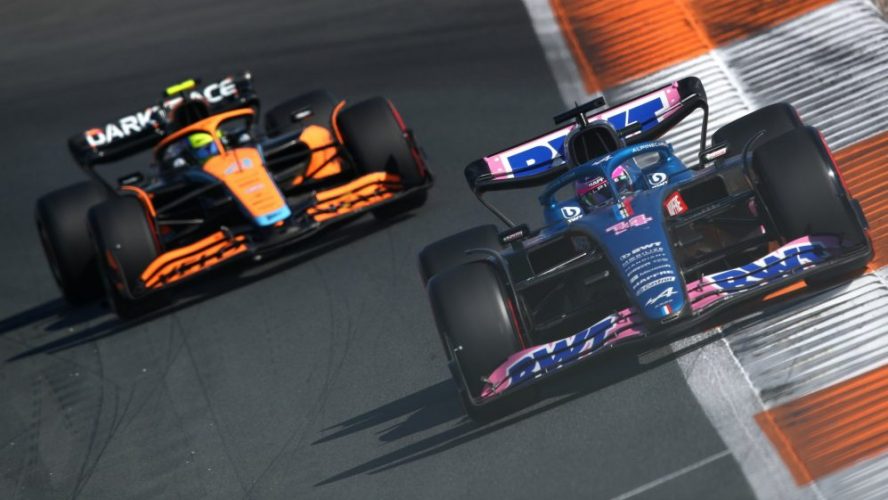 Alpine “trying to beat Mercedes” not take on McLaren

Alpine Sporting Director Alan Permane has identified chasing down Mercedes as his team’s next target, as it seeks to progress towards the front of the Formula 1 grid.

Heading into the season’s final four rounds, Alpine find themselves in fourth place in the constructors’ standings on 143 points, 13 more than rivals McLaren.

However, after the Japanese Grand Prix, McLaren’s Lando Norris said he “had no clue” how his team are still in the fight, given the pace of Alpine’s car.

Perplexed by the Brit’s comments, Permane has now responded by suggesting that they’re a sign of being on the back foot, and setting Alpine’s bar even higher in the races to come.

“Lando loves to keep quoting that, doesn’t he? But we only need to just be ahead. I’m not quite sure why he keeps on. I guess we’ve got him rattled,” said Permane.

“We’re much more focused on Mercedes and trying to beat Mercedes. We’re trying to get ourselves onto that sort of level.

“After every race, we look at where we are in terms of percentage-wise away from pole and things like that, and I’m sure we are closer than we’ve ever been this season. So it’s definitely going in the right direction.”

What has McLaren all riled up?

After progressing from the back of the grid to being ‘best of the rest’ behind F1’s front three teams in the turbo-hybrid era, McLaren seemed on the verge of a return to title contention heading into 2022.

Yet, braking issues at this year’s final pre-season test ensured the team spent the early races playing catch up, and it dropped to the back of the field at the season-opener in Bahrain.

Since then, the Woking outfit has recovered, with team boss Andreas Seidl telling Autosport recently that McLaren is targeting an “aggressive level of development” for 2023. But while McLaren’s comeback has seen them surge to fifth in the constructors’ championship, they still haven’t been able to usurp Alpine.

At times this season, the Alpine has proven fast enough to race Mercedes, with Esteban Ocon outscoring both silver arrows at the Japanese Grand Prix, finishing fourth.

After the race, Norris described Alpine as “so much quicker” than McLaren, but reiterated that he and his team would do their best to fight them until the end of the season.

“They are in another league to us at the minute,” said Norris. “I’m happy we’ve been able to fight them so far into the season, it shows we’ve done a very good job in other areas, in reliability, in maximising our performances, taking opportunities, and not making mistakes.

“They must have done a lot worse than us in all of those areas to only just be ahead of us in the championship with the car they have.

“It’s not a big fight at the minute because they are so much quicker, but we’ll keep trying and limit the points loss to them.”

By Jasmine Hughes5 days ago

Japan represented a return to form for Alpine, after it went through a difficult period both on and off the track.

With the announcement of Fernando Alonso’s exit for Aston Martin and youth prospect Oscar Piastri’s plans to join McLaren, the Enstone outfit briefly found itself without a driver to partner Ocon next season.

Over the three races before Japan, Alpine also scored just two points, with both its cars retiring due to mechanical issues during a rain-soaked Singapore Grand Prix.

That said, following the news that Pierre Gasly is leaving AlphaTauri to join the French team’s project, it appears to have turned a corner, and its drivers picked up 18 points at Suzuka.

As the season comes to a close, Permane has backed Alpine to continue getting closer to F1’s front-runners, but says he isn’t fussed by the eventual gap to McLaren, as long as his team finishes in front.

“Of course, we had a huge setback in Singapore. But I think in Japan, it was all back to normal,” added Permane.

“I imagine that in the next races we can do the same. The car is clearly getting quicker. And I think it’s getting closer to those top guys.