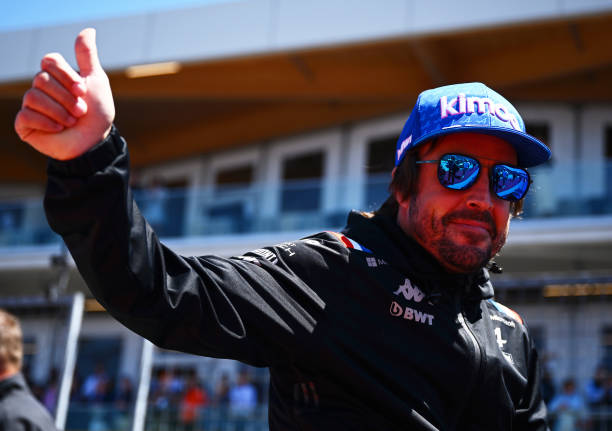 MONTREAL, QUEBEC - JUNE 19: Fernando Alonso of Spain and Alpine F1 waves to the crowd on the drivers parade ahead of the F1 Grand Prix of Canada at Circuit Gilles Villeneuve on June 19, 2022 in Montreal, Quebec. (Photo by Clive Mason/Getty Images)

Things went downhill for the Alpine Spaniard in Montreal.

Fernando Alonso had a great start to the weekend in Canada, but things went downhill fast resulting in a penalty.

Going into the race on Sunday, the Spaniard was hoping to take the lead from the get-go. He is known for not taking any prisoners and for being a tough driver to overtake when he’s defending. Unfortunately, though, his hopes were not met.

Alonso had the worst start out of the top four on the starting grid. He immediately dropped down some places, which consequently led to even more troubles when strategy and mechanical issues came to play.

There were quite a few Safety Cars/Virtual Safety Cars during the race. These all played a part in Alonso finishing seventh as well as some engine troubles in the A522. Canada isn’t the first time we’ve seen the Alpine driver suffer problems with his car. Saudi Arabia and Imola are two notable races where he was forced to retire.

Finishing seventh isn’t what Alonso or the team would have liked. But, sadly, Alonso has now been pushed down to ninth in the race results due to a penalty.

Why Alonso received a penalty?

After the race, Alonso was called to the Stewards. An incident was noted where Alonso was seen weaving down the straight to defend against Valtteri Bottas.

As a result, he was given a five-second time penalty for making “repeated changes of direction”, breaching Article 2 b) of Chapter IV Appendix L of the FIA International Sporting Code. This pushed him back to ninth, allowing Bottas and Zhou to move up to seventh and eighth respectively.

When speaking on his performance in the Canadian Grand Prix, Alonso said: “We ultimately lost a big opportunity to fight for a potential podium as I felt like I had the pace to do so. We were hit with a badly timed VSC just before our first stop. I was on the main straight when it was deployed, and then missed a pit-stop opportunity before it ended.”

Alonso started the race on the hard-compound tyre and completed a long stint before pitting. Unfortunately, it didn’t work in his favour.

He continued saying: “We then had an engine problem from lap 20, which we were trying to manage. We didn’t retire the car and used DRS to defend, as we were losing a lot of time on the straights.

Alonso never mentioned the penalty after the race. He was focused on looking forward to Silverstone, learning from last weekend’s race, to maximise their performance.

“It’s disappointing especially after yesterday’s performance, but we’ll head to Silverstone, try to get on top of our reliability issues and score more points.”

Currently, Alpine are fifth in the Constructors’ Championship with 57 points. Both drivers are in the top 10, with Ocon leading in ninth on 39 points, 21 points ahead of Alonso in 10th.