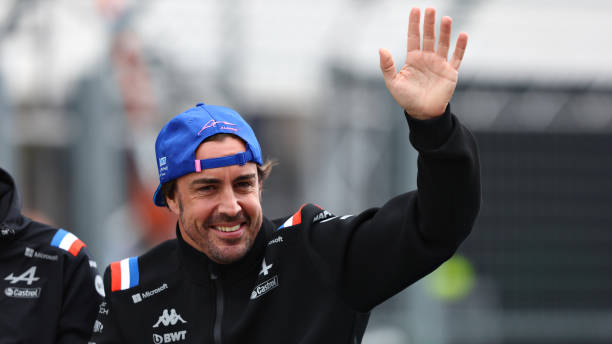 BUDAPEST, HUNGARY - JULY 31: Fernando Alonso of Spain and Alpine F1 waves to the crowd on the drivers parade ahead of the F1 Grand Prix of Hungary at Hungaroring on July 31, 2022 in Budapest, Hungary. (Photo by Bryn Lennon - Formula 1/Formula 1 via Getty Images)

Fernando Alonso will race for Aston Martin in 2023

Formula 1’s two-time World Champion Fernando Alonso has not left Alpine to join Aston Martin for money, instead, the Spaniard has joined the team in green for their “winning project”.  According to former Formula 1 driver Pedro de la Rosa, Alonso’s move from the midfield to the back of the pack is not fuelled by a payday.

In a move that threw F1 into a frenzy, Alonso will replace four-time World Champion Sebastian Vettel, who is retiring at the end of the season. At first glance, it seems to be an odd move for the 41-year-old who will be competing in his 19th season. However fellow Spaniard De la Rosa, believes Alonso’s contract with Lawrence Stroll’s team is a sign that Aston Martin have a promising project in place.

“The most important thing for a driver is to get on a winning project, he told Spanish radio station La Cadena SER.

“Sooner or later, the investment and ambition of Aston Martin will show.”

De la Rosa also believes that Lawrence Stroll’s move for Alonso is set to lure in an abundance of new engineers for the team who have their goals set on one day winning a World Championship.

“As an engineer, you are going to go to the best project, not the one that pays you the best,” said the former pilot and commentator.

“His arrival means attracting more talent to an ambitious project.”

De la Rosa also commented on the move in general, admitting that he did not expect the Spaniard to be joining the Brackley-based team.

“This move by Alonso has caught us all off guard. This news has gone unnoticed in the GP; they have hidden it well,” he said.

“There was talk of Schumacher or Latifi, I didn’t think Alonso would come. I thought he would stay at Alpine, it’s shocking and hard to believe, but it’s reality.”

Alonso’s shock move unintentionally sent shockwaves through the F1 paddock. From what seemed like a clear pathway for young F1 starlet Oscar Piastri to finally get his long-awaited seat in F1, things turned sour when Alpine released a statement in which they announced Piastri would be racing for the French team in 2023. The young Australian denied signing a contract with Alpine and is set to move to McLaren to replace Daniel Ricciardo. McLaren’s last race winner Ricciardo may be left without a seat for 2023 unless he is able to lock in a spot at Alpine.