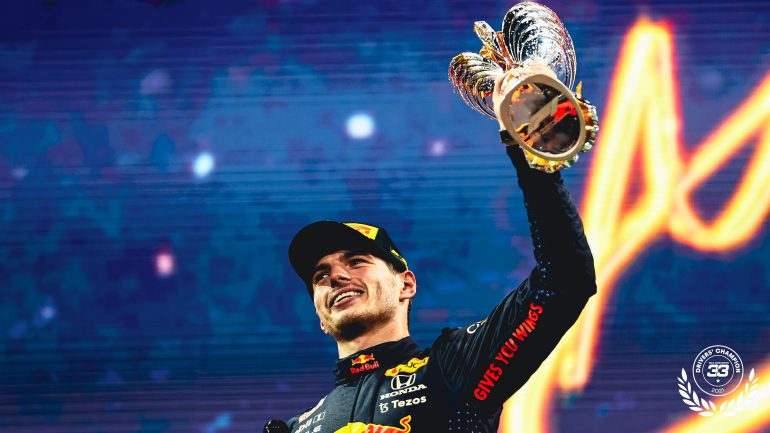 Alonso: F1 title trophy could have been “split in two”

Former world champion Fernando Alonso has said he believes both Max Verstappen and Lewis Hamilton deserved the F1 championship trophy to be “split in two”.

The Abu Dhabi finale saw Hamilton lose the title, after a safety car cost him his advantage against Verstappen.

It saw Verstappen get ahead on the last lap, and win his 10th win of the season.

“He’s a champion, it was a matter of time that he would win the trophy.

“So it is a pure luck thing, what happened today.”

Alonso went on to explain how both of them could have won the title:

“It is going to be a big topic I guess, but if you take the 22 races, as I said on Thursday any of the two could be world champion.

“I think more than any other year if you could split the trophy in two, this was the year to do it. Because both of them were outstanding.”

He then admitted he did feel sorry for Lewis Hamilton, who had been denied his record-breaking eighth world championship:

“Lewis was driving at another level, especially in the second part of the championship,

By Francesca Herring5 days ago

“The Mercedes was the faster car, yes, but Valtteri [Bottas] was not second, it was Lewis putting out that performance.

“When you lose the championship because of the safety car in the last moment, for sure you feel a little bit sorry.”

He expressed how he wanted Verstappen to win, rather than Hamilton:

“As I said on Thursday, I had a little bit more, 51-49 [percent] for Max, and I was clear from the beginning, because I thought that over the season there were a couple more unlucky moments for Max than Lewis.

“The new is sometimes more attractive than the old in terms of a new champion, it’s good when you see the grandstands.

“If Max wins one day four or five championships, then a new guyy will come, and he will be like the big attraction. I think that’s what I feel now.”