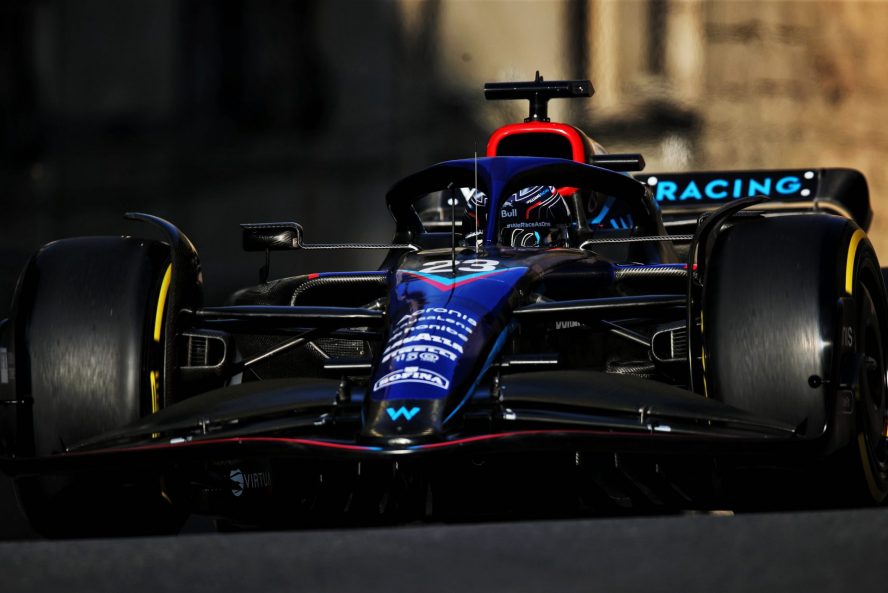 Alex Albon wants drivers who cause red or yellow flags in qualifying to have their lap time deleted.

This has come after the Williams driver had his final qualifying run in Q1 ruined by Fernando Alonso. The Spaniard took to the escape road by the challenging Turn 15, which compromised Albon.

The two-time world champion misjudged the tricky downhill left-hander, which is renowned for catching drivers out.

The subsequent yellow flag consigned Albon to a Q1 exit. However, with the pace of the Williams car, this was already likely.

The events unfolded after Lance Stroll brought out the red flag with just 2:30 left to run in the session. This meant that every car that felt ‘at risk’ of a Q1 exit had to queue in the pit lane and ultimately complete their out lap on a packed circuit with only an extra 45 seconds to play with.

Albon was suspicious of Alonso, who was at risk of elimination himself and would benefit from a yellow – or another red – flag at that crucial point of the session.

Time had expired, so no one had the opportunity to improve their lap time when the yellow flag did indeed come out.

I’m going to show you a picture and I want you to tell me what you see. #f1 pic.twitter.com/S9o8g7rz19

The Red Bull-backed driver referred to Alonso as a “smart guy” and said he “plays the system well”, referring to the underhand approach he felt was deployed. 1996 world champion, Damon Hill, took to Twitter to point out some other tactics that Alonso has been using of late.

In the heat of the moment

Albon fumed at Alonso as he complained to his team over radio:

“He needs to get penalised this guy. He has to. This is ridiculous.

He was doing it the whole lap. He was driving slowly on purpose, and it was so obvious how he went off the track.

It was ridiculous. He braked so early and then he just went off the circuit.”

As reported by gpfans.com, Albon offered a calmer retrospective view, pivoting slightly, when asked about the incident following his elimination from qualifying.

“I will leave it for you to decide.

“It would be a good idea if we had a rule change if the people who create yellow or red flags had their lap-time deleted.

“I know we talked about this recently but it doesn’t put any penalty on the driver who makes the mistake.

“There are games, of course, there are games. You reduce the amount [sic] of people that can do a lap to begin Q1 anyway but then create more yellow flags for the cars behind you.

“I am not angry at Fernando. I think he is a smart guy, he plays the system well.”

Alonso defends himself and appeals for solutions

The Alpine driver referred to similar incidents later in qualifying whilst pleading no wrongdoing in causing the yellow flag. He also highlighted that changes need to be made to ensure everyone has a chance to complete their lap.

“That corner, we saw during qualifying it was extremely challenging.

“I braked late and I could not make the corner, or so I thought, so I took the escape road.

“A McLaren did as well in Q2. Sebastian thought he could make the corner and broke the front wing so there are always decisions you need to make in one-tenth of a second.

“I took the escape road, I know there is also frustration because there were queueing cars and only two minutes and a half at the end of Q1 but honestly, I understand them because I was in the other position as well, many times.

“I think Esteban missed Q3 because of a yellow flag in Q2 from the McLaren. So we need to find a better solution for this kind of problem because we should be able to make our laps.”