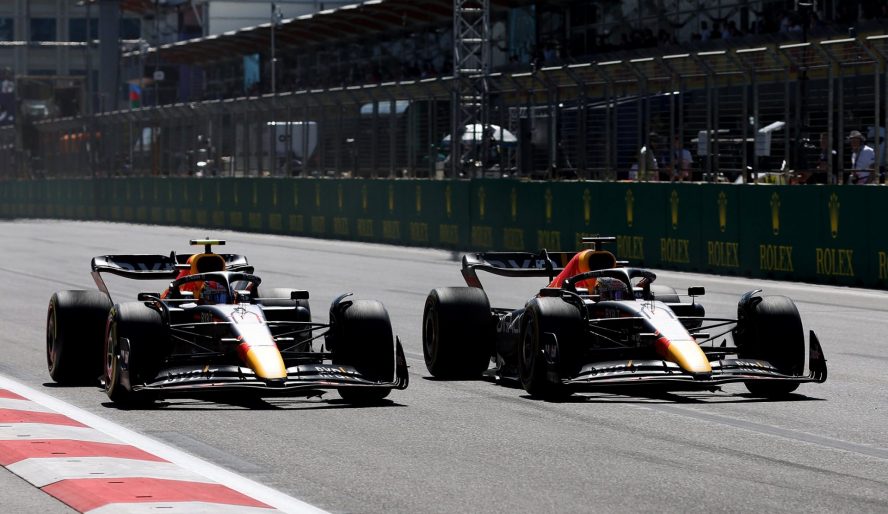 Having picked up his sixth pole position from eight races this season on Saturday, Charles Leclerc’s time at the front on Sunday lasted barely a few seconds as Sergio Pérez got away slightly better and jumped to the inside at the first corner.

Leclerc held Max Verstappen at bay in the early stages, until on lap 9, the first Baku curveball was thrown as the second Ferrari of Carlos Sainz trundled into an escape road with a hydraulic issue.

The Spaniard’s painful 2022 season continues, but his misfortune did allow his team to take a strategy risk and bring Leclerc in for a cheap pit stop under the ensuing Virtual Safety Car.

The two Mercedes and Pierre Gasly followed suit but the two Red Bulls remained out.

Despite Verstappen having been tucked up behind his title rival, it was Pérez whose tyres were struggling and he was soon caught by his teammate.

The team informed the Mexican that there should be “no fighting” and car number one sailed past on the start-finish straight.

A double DNF for the Scuderia

The race appeared to be heating up nicely with Leclerc retaking the lead on his alternate strategy as the Red Bulls pitted, but the weekend was about to get yet more painful for the Tifosi.

The cameras cut to a plume of smoke emerging from the back of the remaining prancing horse of Leclerc, who pulled into the pits to retire.

Another huge swing in the championship battle.

With the top three of Verstappen, Pérez and George Russell settled into their respective spots, the attention moved further back in the field.

Lewis Hamilton eventually battled his way past the stubborn but slippery-in-a-straight-line Esteban Ocon and then Daniel Ricciardo to move himself into the top 5.

But not without a level of discomfort, the seven-time world champion coming over the radio to report that his back was killing him. The Silver Arrows continue to be a rough ride.

Zhou Guanyu also suffered a mechanical issue from what was probably the best performance of his career so far. And on lap 33 of 51, a fourth Ferrari-powered car retired from the race as Kevin Magnussen’s Haas ground to a halt.

Another Virtual Safety Car saw the Red Bulls and Mercedes pit again with Hamilton dropping back behind Yuki Tsunoda, but the Briton was immediately back past and would eventually hunt down the other AlphaTauri of Gasly for fourth.

Tsunoda suffered a unique issue as just half of his DRS flap opened, resulting in a black-and-orange flag for the Japanese. AlphaTauri brought him in and strapped it up with some faithful old gaffer tape but he rejoined well outside the points.

Back at the front, it was plain sailing for Verstappen. The flying Dutchman reached the chequered flag over 20 seconds ahead of his teammate, with Russell completing the podium a further 25 seconds back.

Sebastian Vettel held on for a strong sixth place in Aston Martin’s best result of the season, with Fernando Alonso, the two McLarens and Ocon completing the points.

With a fifth consecutive race win for the Austrian team and now a 34-point margin to Leclerc in the championship, it appears that it may, in fact, be the other way round.