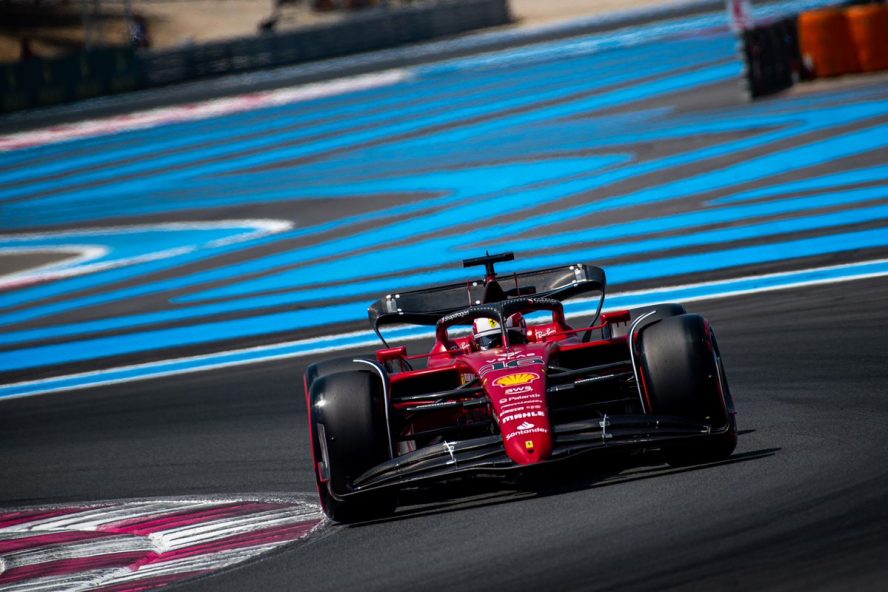 A Fierce Finish At Qualifying In France

It was a close battle between title rivals through corners and straights at Paul Ricard.

It was a fierce finish to the end after a yellow flag ahead of the French Grand Prix.

Le Castellet caught magical moments from all the drivers pushing hard on the 5.842 km circuit of Paul Ricard.

Leclerc led the pack coming out on soft tyres. The track was about 56℃. The Monegasque managed to get through turn 12 avoiding a spin that occurred in FP3. He was significantly faster with a time of 1:31:727.

Teammate Carlos Sainz saw less sliding on the downforce. He handled his tyres well in sector two to avoid track limits at turn 14. It’ll be interesting as the consecutive laps continue. The Spaniard secured a 1:32:297.

The Red Bull team dominated in the corners. The duo followed in second and fourth. The two are for that front row start. Alfa Romeo’s Zhou saw a near miss exiting turn 6. It could have been worse.

Soon enough Alex Albon spun out heading into a corner causing a late yellow flag. Aston Martin struggled with their pace on track. Lance Stroll was heard  complaining about traffic. Another excuse?

Sainz was sensational mastering a 1:31:081. The Ferrari had total grip coming out of the corners. He was quicker than rival Red Bull. The extra horsepower helped out for the top spot.

Hamilton had the idea to push hard. The seven-time champion came out strong on soft tyres. The Brit braved turn 11 and dove in earlier. He was amazing in the first and second sector. The Mercedes driver best was a 1:33:245 to be faster than teammate George Russell who got a 1:33:619. It was a close call for both drivers.

Kevin Magnussen impressed with his straight line speed. It was happy times. Haas Team Principal, Guenther Steiner seemed sure of his driver despite the upcoming grid penalty after deciding to take new engine components.

Esteban Ocon gave it everything to maximise his position. It was a close call but enough. Meanwhile, AlphaTauri driver, Tsunoda proved he’s got what it takes.

There was a mix of new and used soft tyres selected. Charles Leclerc was top with a 1:31:209. Teammate Sainz assisted with the two. It was brilliant teamwork.

The Ferrari and Red Bull battle continued on. Perez was nowhere really but finished eight tenths up to recover well. Verstappen got second fastest. The Dutchman drove fiercely in sector 1 and 3.

Mercedes challenged hard. Russell was almost quicker than Hamilton at one point. Mere seconds separated them. The duo were hitting maximum speeds of 312km/h.

Lando Norris had solid times. The McLaren driver kept up the fight to be ahead of Alpine. Alonso aimed for a higher position but couldn’t manage. The P4 battle in the constructor will continue.

By Catherine Micallef4 hours ago

With a fierce finish, Charles Leclerc claimed his 7th pole this season. He’s the man of the moment. What a drive! The rivalry is set to increase on track tomorrow.