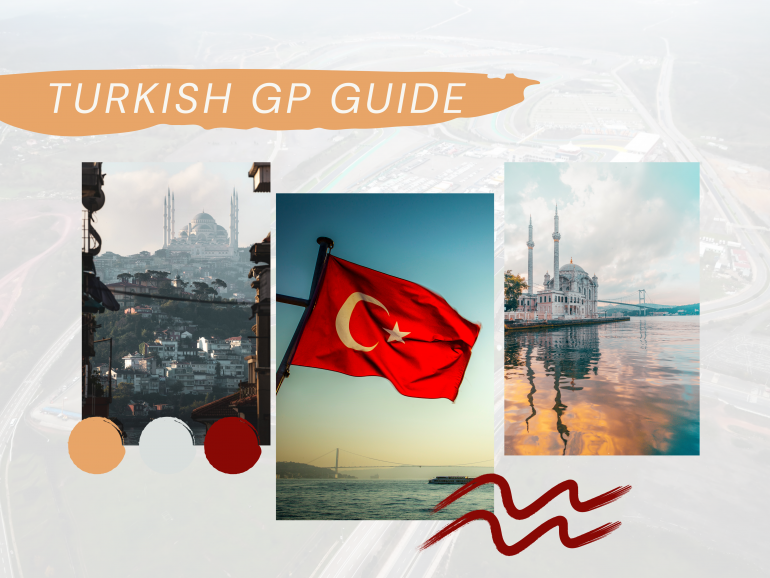 Your Guide to the Turkish Grand Prix Spread across two continents, Istanbul is a city of rich history, contrasts and layers.

Istanbul is the cultural capital of the country, the largest city and principal seaport of Turkey. The old city contains about 9 square miles, but the present boundaries stretch far beyond that. Each neighborhood has its own distinct identity and vibe, and the city never stops moving.

Time Zone: GMT+3, Turkey does not do daylight saving

Intercity Istanbul Park is located roughly 40km, around an hour’s drive east of Istanbul. The track first opened in 2005, with the first Turkish F1 Grand Prix held only days after its completion. Designed by Hermann Tilke, Istanbul Park is often considered one of the best designed by the German. Bernie Ecclestone once called Istanbul Park “the best circuit in the world”. Parts of the circuit have been compared to Spa-Francorchamps, Interlagos and Laguna Seca, but Turn 8 remains the most exciting part of the track. A fast, bumpy, multi-apex downhill left-hander, where cars often average 270kpm for around eight seconds.

The battle to the first breaking point after the start is similar to Spa – a 220m sprint towards Turn One makes for fewer slipstreaming efforts and more focus on gaining places under braking into a blind corner. Drivers climb uphill in a flowing first sector, before taking on another blind corner at the left-hand Turn Three. A slalom run downhill across Turns Four, Five and Six tests a driver’s precision, but they’re a warm-up act to one of the most challenging corners on the track: Turn Seven, another blind uphill corner. A driver has to get this one right, as every time lost in Turn Seven is effectively felt in the following Turns.

Turn Eight, which is crucial to a successful lap of Istanbul Park, takes up an incredible 12% of the entire lap. A high-speed left-hander, Turn Eight quickly earned a reputation as one of Formula One’s greatest corners. The key to excelling in Turn Eight is entry speed: drivers target the first apex flat-out at around 260km/h, despite a slightly blind entry. Once clear of Turn Eight, there’s a quickfire left-right before the longest straight of the lap. Broken up by Turn 11, this section also incorporates the second DRS zone.

The lap then ends with the low-speed Turns 12, 13 and 14 chicanes before it’s back on the power and into the DRS zone of the main straight.

Intercity Istanbul Park has only helt 8 races in F1 history so far, with the 2021 Grand Prix just ahead, but has still produced some iconic racing moments in those years.

Slotting into the 2020 calendar quite last minute, there was very unlimited data for modern Formula One cars, and fresh tarmac made for a very slippery return to Istanbul Park. It saw Lance Stroll take his first pole position, a very mixed starting grid and first lap collisions in the wet. In the end, it was a 94th win for Lewis Hamilton and the 7th World Title for the Briton.

Not to forget are epic battles including Fernando Alonso’s 2006 battle with Michael Schumacher and the crash between Red Bull drivers Mark Webber and Sebastian Vettel in 2010. 2006 also saw Vettel’s F1 debut, Jenson Button’s charge through the field in 2005, Felipe Massa’s first pole and win. How To Get There

Turkey’s main international airport, Ataturk, is located across the Bosphorus, around 50 miles from the circuit. Sabiha Gokcen is Istanbul’s second airport and is now a popular hub for low-cost carriers. It is much closer to the circuit (about 7 miles) and avoids the Istanbul traffic, but it’s a way out from the main hotels and Istanbul sights.

Istanbul itself has a well-equipped transportation network, with plenty of metro lines and busses. Otherwise, the best way to cross from Europe to Asia and back is by ferry. To get to the circuit, it is best to drive, but with Istanbul traffic, it could take a good two hours on a busy weekend.

Istanbul, with its rich history, has a lot to offer outside of a race weekend. Here are just some pointers to consider

Hagia Sofya: Initially a church, then a mosque and today a museum, the Hagia Sofya is the third building constructed in the same place with a different architectur than its predecessors. With its breathtaking domes, marble columns and magnificent mosaics, it is one of the wonders of world’s architecture history.

Basilica Cistern: A 1,500-year-old building supported by 336 columns. The extraordinary subterranean cistern offers one of the most surprising tourist experiences. Many of the columns used in construction were recycled from earlier classical structures and feature decorative carvings. The most famous of these are the column bases known as the Medusa stones in the northwest corner with their Medusa head carvings. Contrary to James Bond, who had to row his way through the underground cistern in From Russia with Love, you can take a stroll on the concrete walkways.

Topkapi Palace This was the main hub of the Ottoman Empire. Opulent pavilions, jewel-filled Treasury and the Harem offer a glimpse into what it might have been like between the 15th and 19th centuries.

Blue Mosque The Sultanahmet Mosque was built between 1609 and 1617 and is also known as the Blue Mosque because of the blue tiles used to decorate the walls of its interior. Light inside the mosque is provided by more than 200 stained glass windows and several chandeliers. The Sultanahmet Mosque is the only mosque in Istanbul that has six minarets and this provoked hostility at the time, as such a display was previously only preserved for the Prophet’s mosque in Mecca. Legend has it, his whole issue was the result of a misunderstanding between the sultan and his architect.