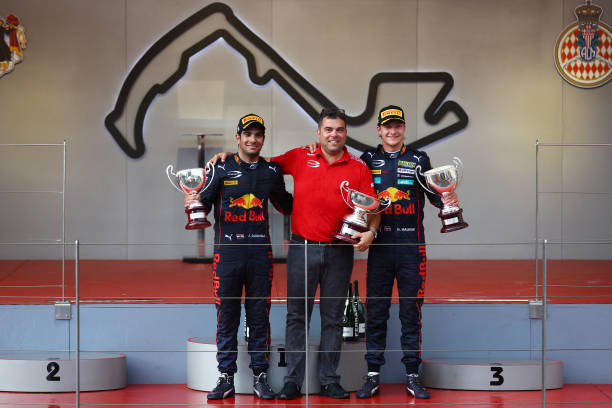 MONTE-CARLO, MONACO - MAY 28: Race winner Dennis Hauger of Norway and Prema Racing (R), Second placed Jehan Daruvala of India and Prema Racing (L) and Prema Racing Team Principal Rene Rosin (C) celebrate on the podium during the Round 5:Monte Carlo Sprint race of the Formula 2 Championship at Circuit de Monaco on May 28, 2022 in Monte-Carlo, Monaco. (Photo by Clive Rose/Getty Images)

Which Red Bull junior could replace Tsunoda next year?

If AlphaTauri chooses not to keep Tsunoda, they have plenty of options to replace him.

AlphaTauri team principal Franz Tost has yet to announce if Yuki Tsunoda will remain with the team in 2023. Should they decide to replace him for next season, the Red Bull junior academy has five drivers in Formula 2 to choose from.

Could Tsunoda be replaced?

Tost has already announced that Pierre Gasly will remain with AlphaTauri for 2023. But he’s also said that if Tsunoda doesn’t perform throughout the rest of 2022, he’ll be out of a seat at the team.

“If he continues like he did during the season, apart from crashing, I think he has a good chance to stay with us,” said Tost. “It depends on him. If he shows a good performance he will stay. If he doesn’t show a good performance, he is out. Totally easy.”

Tsunoda has certainly improved on his tendency to make big mistakes, although the team’s luck hasn’t been the best this season. Tsunoda is currently on 11 points, only five behind Gasly.

But if AlphaTauri isn’t satisfied, or if one of the junior drivers is particularly impressive, Tsunoda could very well be out of a seat for next season. But which junior drivers would make the shortlist to become his replacement?

Juri Vips has been terminated from his role of test and reserve driver for Red Bull, but remains a part of the academy and would still be a viable choice for the team. Alongside Vips, the other Red Bull-backed drivers in Formula 2 are Jehan Daruvala, Dennis Hauger, Liam Lawson, and Ayumu Iwasa.

Formula 2 is not much more than halfway done with the 2022 season, so there’s still a lot on the line for these drivers. Anything could change, particularly in the next couple of weeks before their break. But let’s evaluate their performances so far this season, and see which of them AlphaTauri might be taking the most interest in.

Vips has come under fire in the past couple of weeks for using a racial slur during a Twitch stream. This resulted in him losing his position as a test and reserve driver for Red Bull, but he retained his position as a member of their academy and seat at Hitech Grand Prix in Formula 2.

Vips had a standout first full season in Formula 2, driving alongside Lawson at Hitech in 2021. He was the first driver to claim two victories in one weekend, and finished sixth in the standings, ahead of his teammate.

Vips’ 2022 started well, taking two podiums in the first two weekends. He then claimed his maiden pole position in the third round at Imola. But disaster struck when he was overtaken at the start and went off into the gravel several laps later, ending his own race.

Three rounds later Vips took his second pole position and had his shot at redemption. But after comfortably leading the first stint, he clipped the wall and once again lost out on finishing the Feature Race.

Overall, all the on (and off) track slip ups have made it a turbulent season for Vips so far. He sits eighth in the Formula 2 standings with six rounds to go. Even if Vips manages to recover and get further up in the standings, he’s unlikely to be seriously considered as a replacement for Tsunoda.

Daruvala, now in his third season of Formula 2, is currently the highest placed Red Bull junior in the standings. He sits in fourth place, behind Felipe Drugovich, Logan Sargeant, and Theo Pourchaire. That being said, he’s still a full 74 points behind the points leader.

Daruvala is also one of three drivers in the top 12 without a race win to his name this season. The other two are Enzo Fittipaldi (in fifth), and Juri Vips (in eighth).

Like Vips, Daruvala also scored two podiums in the first two rounds of the 2022 season. But also like Vips, victory has eluded him so far this year. He has been impressively consistent to be the highest placed driver without a win, no doubt due to his experience in the category.

One of Daruvala’s best drives came last weekend in the Austrian Feature Race, when he started on the wrong strategy, but made the best of it to finish second. Unfortunately, he received a penalty after the race because the team used their cooling fans to attempt to dry his grid spot before the race. The 20-second time penalty dropped him down to 12th.

If Red Bull judges success based on championship order, Daruvala is currently in the lead of his fellow juniors. But they’ll likely note the fact that he’s in his third season of Formula 2, and look towards the drivers who are making waves in their earlier years.

To currently be ahead of more experienced Red Bull juniors like Vips and Lawson says a lot about the reigning Formula 3 champion. Although he would likely have been hoping for a better first half to his debut Formula 2 season.

After Oscar Piastri conquered Formula 3 with Prema then joined the team in Formula 2 and won again, Hauger would have been seeking a similar championship charge. But it was a tough start to the season, with several unlucky retirements and a strange penalty that took him out of the lead of the Sprint Race in Jeddah.

But things started looking up for Hauger after he took his maiden podium in Imola. He went on to take both a Sprint Race and a Feature Race win in the following three rounds.

While Hauger hasn’t pulled off a Piastri-level mastery of Formula 2, he’s been greatly impressive in his rookie season so far and could be on for a very decent finish to his first season in the category. And if it’s decent enough, he could be the driver that AlphaTauri looks to as the next driver to partner Gasly.

He has finished on the podium a further two times, in Baku and Silverstone. A number of unlucky retirements have been the main reason he isn’t currently higher up in the standings.

Driving for Carlin, it seemed at first as though Lawson had the measure of his rookie teammate, Logan Sargeant. But as Lawson has been somewhat anonymous the past couple of rounds, Sargeant has been consistently at the top of his game.

Two consecutive Feature Race wins for Sargeant in Silverstone and Austria have put him second in the point standings, 55 points ahead of Lawson. With Sargeant charging through the field and not looking like he’s going to slow down, Red Bull might take into account Lawson not being able to keep up with his rookie teammate.

No driver has been a bigger surprise in Formula 2 this year than Iwasa, who has had pace almost unlike anyone else in his DAMS Racing car. But his pace might not be a surprise to anyone who watched the 2020 season of French Formula 4, where Iwasa took nine wins, and didn’t finish outside the top five in any of the 21 races.

Most people didn’t look twice at the Japanese driver when he was promoted to Formula 2. After just one season of Formula 3 where he finished 12th overall, expectations weren’t particularly high.

But starting dead last for the first race of 2022, Iwasa made up 14 places to finish eighth and score points in his Formula 2 debut.

It became regular for Iwasa to come charging through the field during the races, often finishing many places ahead of where he started. While he is prone to mistakes and doesn’t always qualify as high as he should, Iwasa has been one of the most impressive rookies so far.

He has two podiums to his name and sits 13th in the standings. While Iwasa is currently the lowest scoring Red Bull junior this season, he’s also arguably been the most impressive. What might make AlphaTauri hesitate when looking at him as a potential driver, however, is his similarity to Tsunoda.

It’s not just nationality that these two drivers have in common. They’re both intense and about as quick as any driver could be. But, they’re also both a little reckless and prone to mistakes. If Tost and Red Bull make the choice to replace Tsunoda for 2023, they might not be looking for a driver who is similar to him, and choose someone who is slower, but more consistent.