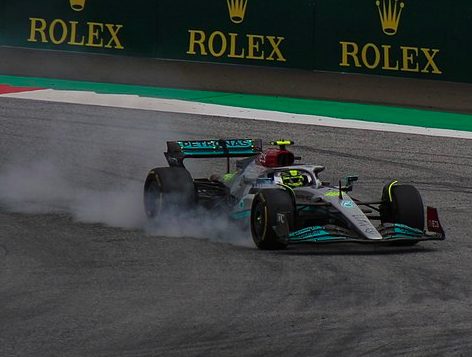 Could we see another rivalry between Max Verstappen and Lewis Hamilton after Mercedes’ upgrades?

As we are approaching the French Grand Prix, Mercedes have been busy with developing their car to compete with Red Bull and Ferrari. The defending constructor’s champions have been rapidly improving this season and they have recently been able to race against the top teams.

This means that the Silver Arrows are catching up with the rapid Red Bulls – and we all know what happened the last time Max Verstappen and Lewis Hamilton raced in similarly matched cars. In fact, we could have seen the pair competing at the British grand prix if Verstappen did not have damage to his car.

In the last four races, both drivers have gained the same number of podiums – with three each. We even had a slight glimpse of a battle between Verstappen and Hamilton in the Canadian grand prix. The Englishman ended up in front of the defending champion, following a pit stop from Verstappen, and used his expertise to keep the Red Bull behind. However, the Mercedes simply could not keep up with the attacking car.

Red Bull boss, Christian Horner believes that Mercedes have been making progress with their car:

“We’ll expect them to be quick in [Paul] Ricard. They’re showing flashes of being there or thereabouts. The last two races have been pretty decent for them and there’s been no sign I think of any porpoising at all, so they seem to be slowly bringing themselves back into the game.”

“We’ve seen in those last couple of races just how fast Lewis is.”

But they are not the only ones to receive upgrades. Red Bull have also been working on their car for the French grand prix, to the dismay of Sergio Pérez:

“I think the development of the car has been … I haven’t been as comfortable with it as I was in the beginning. Let’s put it that way.”

This could suggest that the ‘RB18’ is being developed to suit the needs of Max Verstappen, presumably so the Dutchman can defend his championship. The reliability upgrades for the Red Bull have also been successful as the power unit has been considerably more consistent as the season progressed.

An even playing field

Both Lewis Hamilton and Max Verstappen have a great chance of competing in the race at the Paul Ricard circuit. Both drivers will inevitably be racing each other the whole weekend, with the added fire from the Ferrari’s who will be right up there with them.

Last season saw Verstappen take the top spot of the podium in a narrow race, with his rival close behind in second place. While there are more drivers competing for that top spot this year-round, fans can finally expect another fierce battle between the old enemies. This rivalry may continue throughout the rest of the calendar as Horner stated:

“I think they’ll be a contender. They keep consistently scoring points. I’m not sure how far off they are in the constructors’ or drivers’ [championships] at the moment, but you know, sometimes having more cars in play is a good thing.”

The Austrian grand prix saw Charles Leclerc win his first race since April with the Australian grand prix. The Monegasque has been constantly pushing for race wins this season and he has been driving to an excellent standard.

This means that Formula One could see an intense war between Leclerc, Verstappen and Hamilton which could last until the end of the season. Each driver has bundles of desire and skill. On top of this, both championships are open for the taking and while it may be unlikely for Hamilton to contend – stranger things have happened.

Either way, exciting times are ahead for F1. There are 12 races left this season, which means that there is more than enough time for an arsenal of intense battles to happen. We have seen many incredible battles between Verstappen and Hamilton – but we may see even better ones with Charles Leclerc getting involved in the rivalry.