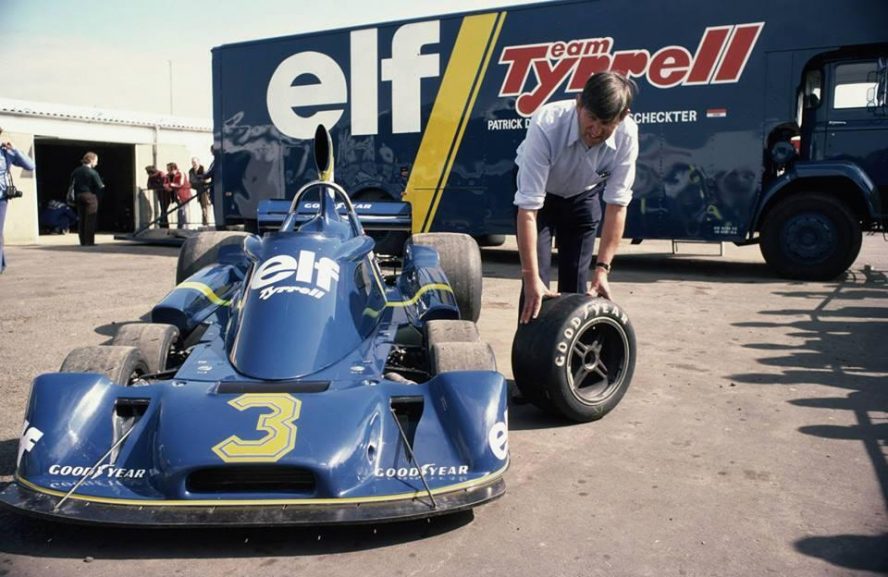 Ken Tyrrell checks tyres for his most iconic car of his era in F1: the P34 (Feature Image Credit: UnracedF1 on Twitter)

One of the great pioneers of the sport, Tyrrell were once feared and respected in equal measure

Ken Tyrrell’s sale of his eponymous team in 1997 is a sombre moment in F1.  Tyrrell’s achievements in F1 are not just impressive from a technical standpoint, but also an engineering perspective. Ken never refrained from experimenting; his team thrived from it. A team player, Ken’s time in F1 spanned over thirty years. F1’s landscape changed dramatically during his team’s tenure.

A true privateer he oversaw an operation that never stopped after the team was sold. The legacy of the team, therefore, continues today, as the sale of the team to British American Tobacco created BAR, then Honda. The team then morphed into Mercedes in 2010, becoming one of the most successful teams to grace the F1 grid.

Tyrrell’s place in F1 and its legacy are secure as it paved the way for some of the most ingenious solutions to F1’s developments. The most notable include the now famous six-wheeler car from 1974. A truly unique car, it did not win the World Championship but did set the foundations for future wins.

Ken also was adept at maturing talented drivers after they arrived on the F1 scene. Drivers such as Jean Alesi owe their big chance in F1 to Ken Tyrrell’s faith in their speed. One of the opportunities given to a driver would go on to become one the most successful partnerships in F1 history

Sadly as the case with F1, its downfall and disappearance can be attributed to all too familiar reasons. Let’s take a look at the history of this team, and how it rose to become an icon of F1 before its demise in 1997.

It may be hard to believe, but the birth of F1’s most iconic teams occurred in a nonchalant brown shed in Woking. Ken Tyrrell designed the first of his cars here in the late 1950s before the operation expanded into a wider factory as his team grew.

Originally a driver, Tyrrell moved into team ownership, running his own team in the lower formulas from 1960. Even at this early stage of the team’s existence, Tyrrell gave opportunities to drivers who would become F1 legends. Jackie Stewart and John Surtees both benefitted from drives in the fledgling team. Stewart’s tenure with Tyrrell would become part of F1 folklore.

Tyrrell had aspirations to reach F1 and finally achieved his dream in 1968. Unable to run a full privateer team, Tyrrell collaborated with the Matra team to form a joint entry. Matra already had a works entry on the grid, running as a French team. This new team ran as Matra International, under a British licence. With Ken Tyrrell at the helm and the resources of Matra, the impact on the team was immediate.

Jackie Stewart and Jackie Stewart Johnny Servoz-Gavin were chosen for the task and did not disappoint. Second place in the Driver’s standings and three victories for Stewart highlighted the strengths of the partnership.

Matra withdrew its works team at the start of 1969, focusing instead on Ken Tyrrell’s entry.  Built in France, the car ran structural fuel tanks, which would only be eligible for one season. This first example of Tyrrell’s experimental ingenuity landed Ken Tyrrell and Jackie Stewart both championships. 1969 was only the duo’s second year in F1, a highly impressive achievement.

For 1970, Matra merged with a subsidiary of Chrysler, resulting in a political push for the team to longer use Ford engines. This presented a problem, as Matra and Tyrrell were locked into deals with Elf. The Simca engines were not as powerful, and the chassis proved to be poor. Buying a chassis from rivals March, Tyrrell had in fact begun work on his own car in his Woking shed. The Tyrrell 001 made its debut at the end of 1970, the team now a fully-fledged outfit.

The 001 made its full-season debut in 1971, having raced in the final rounds of 1970. Improved reliability was critical for the team to move forward. This was realised and unbelievably, Tyrrell won the Constructor’s Championship, with Jackie winning his second driver’s title. The Ford Cosworth DF V8 proved to be powerful, and reliable and flew in the hands of Jackie Stewart.  The 001 was quickly replaced by the 002, with the same concept as before. The 003 also raced in 1971, with more modifications.

Such was the success of the 002 and 003, the chassis also raced in 1972. This proved to be a more difficult season for the team. Although the team finished second in both championships, the highs of 1971 had very much gone. That Stewart finished second in the standings is all the more remarkable when factoring in medical issues that hampered him.

For 1973 a reset was required. The new 004 chassis made its debut and powered Stewart to his second driver’s title with Tyrrell. However, this period of F1 is also remembered for being incredibly dangerous, as the second driver for the team François Cevert found. The Frenchman was tragically killed during practice for the final race. The impact of this tragic event had huge implications for Ken Tyrrell. Stewart retired as a three-time World Champion, and the reliable Cervert was now gone. Although a powerhouse in F1 still, the highs of the early 1970s would never be repeated.

A record that will stand for all time

Ken Tyrrell knew he had to push to keep his team competitive. 1976 would prove to be the boldest yet and produce one of the most legendary cars of this era. Designer Derek Gardner took a unique view of the regulations and designed a six-wheeled Grand Prix car.  The concept raced across two seasons and proved to be competitive in both 1976 and 1977.

The concept divided the drivers. Jody Sheckter did not believe in the design, despite taking a win and four-second places in 1976. Departing the team at the end of the year, the regulation changes brought in for 1977 ultimately proved Sheckter right. A wider and heavier car, the P34B proved to be a backward step compared to its predecessor, and second driver Patrick Depailler retired from 9 of the 17 rounds. The six-wheeler concept saw the team finish third in the Constructor’s championship in 1976, before slumping to sixth in 1977, with no wins. Tyrrell would revert to a conventional four-wheeled car from 1978 onwards.

The P34 encapsulates Ken Tyrrell’s career. Unafraid of experimenting, and adapting to ever-changing regulations. Other teams in the modern era have tested Tyrrell’s concept of using a six-wheeled Grand Prix car. None have raced, and the FIA introduced strict rules stating that four wheels would be both the minimum and maximum of wheels. This means the P34 will now forever hold the record of being the car with the most wheels to compete and win a race. A radical record for a radical car.

A steep decline and controversy

Despite sponsors, the lack of championships and regular results began to impact the team. It started rapidly losing money and competitiveness in the late 1980s. Michele Alboreto took the team’s final victory in 1983 at Detroit. After this, the team would show flashes of brilliance, but never regained its glory years or regular competitiveness.

Controversy also hit the team. Disqualified from the 1984 World Championship, the team was guilty of running its car underweight. This impacted Martin Brundle, making his Grand Prix debut. Brundle finished second at Detroit that year, only to see his result taken from him. The team struggled to recover in 1985, finishing at the bottom of the standings, unable to repeat the results of the previous year.

A welcome reprieve and flash of brilliance occurred in 1990. Ken Tyrrell had just signed another talented French driver from the lower formulas, Jean Alesi. McLaren and Ayrton Senna were imperious at this point in F1. That did not stop Alesi from battling with the legendary Brazilian at the US GP at Phoenix. Seeing an opportunity to take the lead, Alesi dived down the inside of Senna and took P1. Senna of course would repass the Frenchman, but Alesi had made a big statement. Alesi would move to Ferrari for 1992, his 1990 Phoenix drive no doubt impressing the Scuderia.

The team then began a steep decline, marking the end of its competitive era.  Securing a long-term deal with Yamaha in 1994, Tyrrell’s budget reduced the team to midfield runners with the occasional podium the best it could hope for. One podium in the partnership’s inaugural season was the highlight, as Yamaha’s engines were both unreliable and slow. The team opted to move to Ford V8 power in 1997.

The death knell of an all-time great

By 1997 the team was in dire financial straits, and this showed in the design of the 025. Devoid of sponsors, Tyrrell once again turned to unique ingenuity to improve its competitiveness. The team realised it needed a solution for high downforce circuits and created side wings on either side of the cockpit. Christened X Wings, the devices began sprouting at other teams, with even midfielders Jordan trying the concept. Sadly this did not prove to give the burst of speed needed. The team scored its last ever points in 1997, courtesy of Mika Salo at Monaco. The Finn took P5 in a rain-soaked race, without making a pitstop.

Ken Tyrrell knew that his time in F1 was at an end, and sold the team to Craig Pollock on the eve of the 1998 season. The team bore his name for the last time that year, but Ken himself stood back in preparation for the transition to British American Racing (BAR) for 1999. However, the main reason he quit was the signing of Riccardo Rosset. Although bringing substantial backing, the Brazilian’s two previous seasons had proved challenging. He failed to qualify frequently, with questions raised over his race craft. Ken Tyrrell’s once proud team now had a pay driver on its books.

Rosset and Toranosuke (Tora) Takagi struggled in the 026 in 1998, with Rosset failing to qualify on multiple occasions. This led to a tense team atmosphere.  The last on-track action for Tyrrell came at the finale where Takagi and the Minardi of Esteban Tuero collided at the final corner, sending debris flying in all directions. Moments later, Michael Schumacher came past the wrecks and suffered a tyre blowout, ending his championship hunt. Rosset once again failed to qualify.

The end of Tyrrell in F1 proved to be undignified. A team unafraid to push the boundaries, it remains one of the most legendary and iconic privateer teams. That Mercedes can trace its roots back to this eponymous team and a shed in Woking just shows the legacy that one truly outstanding teams can have in the sport. Ken Tyrrell was a pioneer, leader and an all-time great of an era that is now part of history. His legacy and team must never be forgotten, nor the impact he had on the sport be underestimated.