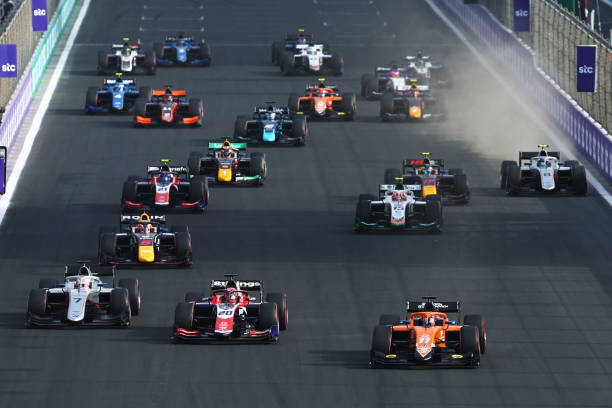 JEDDAH, SAUDI ARABIA - MARCH 27: Felipe Drugovich of Brazil and MP Motorsport (11) leads Richard Verschoor of Netherlands and Trident (20) and the rest of the field into turn one at the start during the Round 2:Jeddah Feature Race of the Formula 2 Championship at Jeddah Corniche Circuit on March 27, 2022 in Jeddah, Saudi Arabia. (Photo by Lars Baron/Getty Images)

Time for Testing: What to expect

Testing in Barcelona is approaching for the feeder series

As Barcelona testing quickly approaches for Formula Two and Formula Three, here is what we can expect.

Formula 2 kicks off testing with three days of running from the 12th-14th of April. This will be the second and final testing event for F2 after the first event in Bahrain. The teams will have both the hard and soft compounds available to test. Six sets of the prime tyre (hard) and two sets of option tyres (soft) make up the test tyre allocation.

Current Championship leader Drugovich will be one driver to watch after scoring points in the first two rounds of F2. During Round 1 in Sakhir, Drugovich placed 5th in the Sprint Race following up with P6 in the Feature Race. Moving into Round 2 in Jeddah, Drugovich put in a stellar performance putting it on pole during Qualifying. To add to his weekend he placed 3rd in the Sprint Race as well as winning the Feature Race. Topping the timing sheets of Day 3 during Bahrain Testing, Drugovich will have high expectations.

Lawson will be another driver to watch after topping Day 2 of the Bahrain testing session. He is currently second in the championship after the first two rounds on 34 points. The Kiwi driver looks very comfortable with Carlin, producing two podiums in Round 1. Lawson started Round 2 well winning the Sprint Race. However, his weekend was shortly diminished after stopping in the pits during the Feature Race.

An honourable mention goes to Hauger who holds the FIA F3 lap record at this circuit with a 1:36.643 in 2021. After winning the 2021 F3 Championship, the PREMA driver will be hoping for more track time after only scoring points in Round 2’s Feature Race. He is currently 12th in the championship.

After testing last week in Jerez, Formula 3 return for their third and final testing round. The drivers will be on track for two days running between the 15th-16th April. Unfortunately, we will be missing a driver after Juan Manual Correa announced he would not be taking part due to a stress fracture in his foot.

Martins currently leads the championship by a point after winning the Feature Race in Round 1. The ART driver returns for another season in Formula 3 after finishing 5th in the championship last year. While Martins may not have been topping the times at last week’s test in Jerez, he ended Day 2 only 0.014s behind leader Leclerc.

Returning for his second season in FIA Formula 3, Leclerc has had an impeccable start to the season. Leclerc is currently second in the championship gaining points in both races during Round 1 in Sakhir. Leclerc had a particularly impressive Feature Race placing P2 after making up 11 places. His impressive run continued into Jerez testing as he topped the timing sheets in three of the four sessions. He was only to be beaten in one session by teammate Oliver Bearman.

Overall, we can expect an action packed testing programme. All live timings will be available on the F2 and F3 websites.

Formula 2 will return in Imola for Round Three. Formula 3 will be joining them but for Round Two of the season.